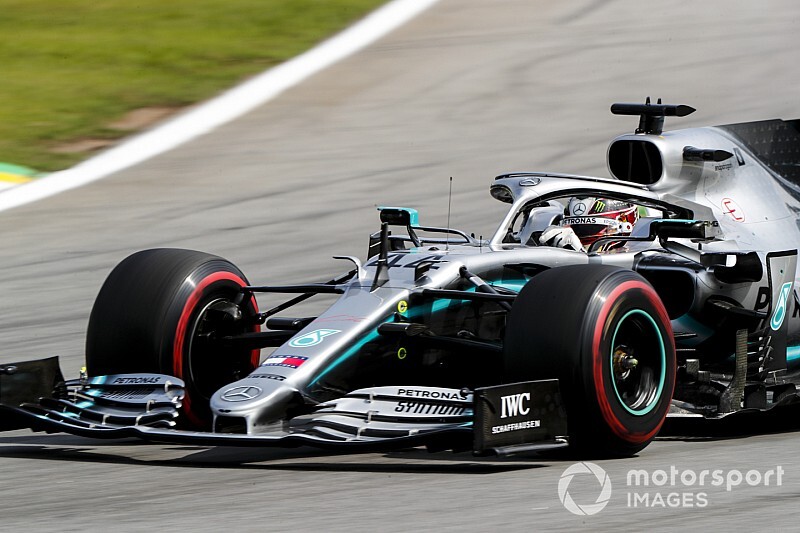 Lewis Hamilton said he accepts full responsibility for the Brazilian Grand Prix collision with Alex Albon that led to him being penalised by the Formula 1 stewards.

Hamilton knocked Albon's Red Bull into a spin at the tight Bico de Pato corner on the infield while trying to reclaim second with one lap to go following a late pitstop for fresh tyres during a safety car period.

Though Hamilton crossed the line in third and took part in the podium ceremony, he was already under investigation and was given a five-second time penalty soon afterwards - dropping him to seventh in the results.

He had expressed remorse for the incident in immediate post-race interviews and underlined after the penalty that he had no qualms about accepting blame for the tangle.

"I've got a penalty. I totally accept the blame as I was coming from behind," said Hamilton. "You don't hardly ever see me do that, collisions with anyone.

"In hindsight, I could have waited to come across the line, but hindsight is always a great thing."

The clash cost rookie Albon what would have been his first F1 podium. He finished 14th.

"We'll live to fight another day and that won't be the last time that he's in position for a podium and he'll have many more great races," said Hamilton of Albon.

"So I hope, as hard as it is a pill to swallow, that he can learn from the experience also."

Albon admitted he was "upset" to lose a potential second place but understood why Hamilton tried the move.

"Of course he didn't mean to do it. I'm not angry at Lewis," he added.

He suggested that Hamilton had been in a hurry to overtake him because he still felt he had an opportunity to catch leader Max Verstappen, which Hamilton confirmed.

"It's always a big question of when is the right time to try it," said Hamilton. "We only had a lap and a half to go. An opportunity came up, I was quicker through Turn 9 [Pinheirinho].

"And I was in shooting distance, so I gave it a shot. Ultimately, in my mind, I'm trying to catch Max. It's highly unlikely, but that was the goal."

Gasly: "Insane" podium "the best day of my life"