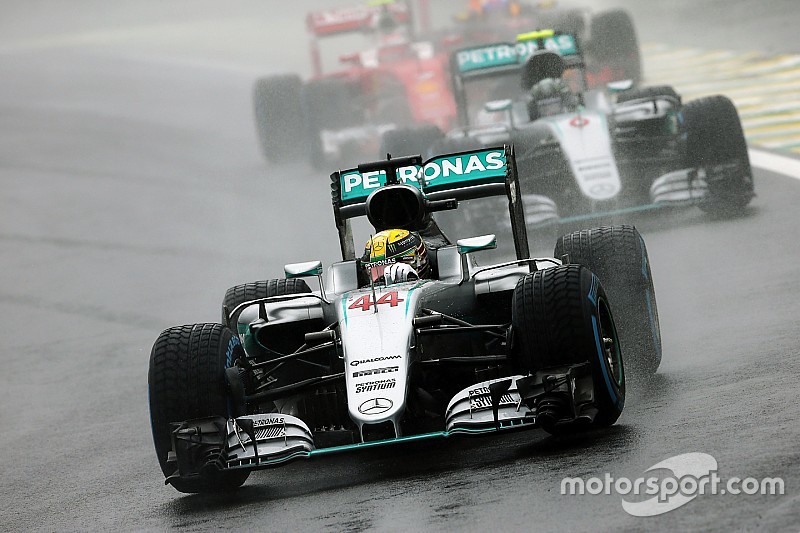 The Briton took his ninth win of the season - and the third in a row - after controlling the race from start to finish after every restart.

He went on to win by over 11 seconds from teammate Nico Rosberg, who never troubled his only championship rival.

"It was a very easy race," said Hamilton. "Probably one of the easier ones. I didn't have any spins or moments, it was pretty straightforward.

"Silverstone 2008 was way harder than this."

Hamilton, who took his first win at Interlagos, admitted winning the Brazilian GP had always been a dream for him given his admiration for Ayrton Senna.

"I have been dreaming of winning since I was very, very young," he added. "These experiences feel surreal and won't kick in until later.

"After so many years of not winning this GP... It is a hard GP to win and today was one of the most difficult in terms of being wet and aquaplaning – but probably the most smooth-sailing race I've had here in 10 years."

The win means Hamilton is now 12 points behind Rosberg in the championship with just one race to go.

Rosberg can secure the title by finishing third in Abu Dhabi.

"I am hunting and all I can do is do what I am doing right now," Hamilton said. "The team has given me a good car and finally the reliability is really good. Abu Dhabi is a good track for me."

Rosberg said he was satisfied with today's result even though he was never a match for Hamilton.

"I can live with the second place today, even though I was hoping for the win," he said.

Why flexibility will be vital for Formula 1's survival