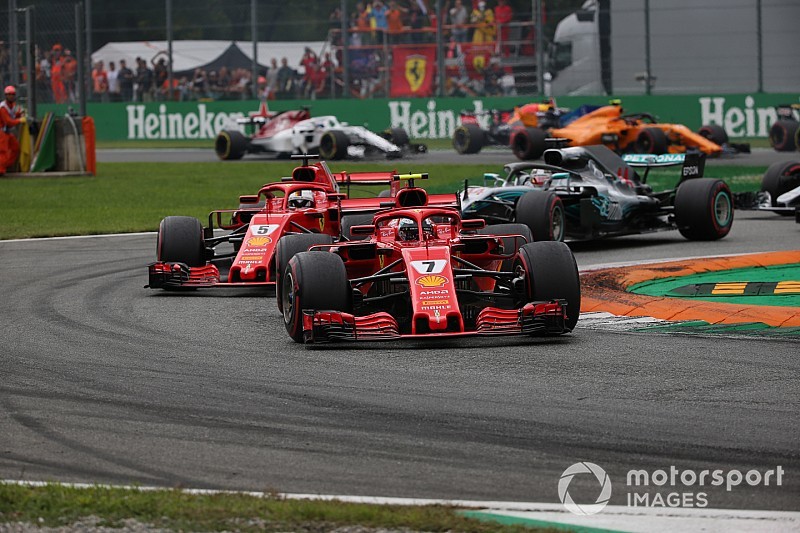 Lewis Hamilton says he is surprised Ferrari has never openly imposed team orders this year, in the wake of his Russian Grand Prix switch with Valtteri Bottas.

After Hamilton was gifted the win in Sochi when his Mercedes team told Bottas to move over for him, the world championship leader says he does not understand why main rival Ferrari has not acted in a similar fashion when opportunities have presented themselves.

"We've only had team orders in one race, but we have worked as a team in others," said Hamilton ahead of the Japanese GP

"So there have been times when Valtteri hasn't be in the top five and there has been a Ferrari, me and a Ferrari – and the Ferraris have worked together. The way they will do that is that they will stop one car, which means that I will have to stop.

"So they will work as a team in certain part of the years. But in crucial points like in Monza they haven't. And is that a surprise? Yeah. They have done that in the past, so why they have changed I don't know. But it is not my problem."

Although Hamilton understands the value of team orders in helping boost his title challenge, he admits he remains conflicted about the role they play in F1.

"I don't think you get your mind around it," he said. "You have to accept it and move forwards, and I am definitely split, just like all the people have split opinions about it.

"On one side I feel one way about it, and on the other side I feel another way about it. But it has happened, it is done and dusted. But collectively as a team we've stayed quite united through the whole experience."

Bottas too has also understood that the chances of further team orders to help Hamilton remain for now.

"I just need to accept it," he said. "It is now the situation because of everything that has happened earlier in the season.

"So yeah, I can't fight anymore for the championship. I am a team player so I am willing to help.

"I like nothing more than winning races and fighting for the championship and that's what I want to do That will still be my ultimate goal for each weekend and hopefully that can happen.

"But I'm a team player as well, that's what we do. We are a strong team and we do want to win both of the titles, and we need to work as a team if we want to do that."

Asked whether he was resigned to not being able to win again against Hamilton until the championship was sorted, Bottas said: "No, it's not like that. I think definitely I am still allowed to win, [but] it will depend on the situation.

"I think honestly, last weekend if Lewis didn't have the blister, if he didn't have that much pressure from Sebastian, maybe the team would have not done it. So it will be done case-by-case."

Asked about what he was expecting from Bottas now, Hamilton said: "How I understand it is he has to do the best job he can on the weekend. I don't arrive here thinking that Valtteri has to work for me. No."