Lewis Hamilton has admitted that Mercedes' title success this year does not feel as "happy" as its previous ones, following the loss of former team chief Niki Lauda. 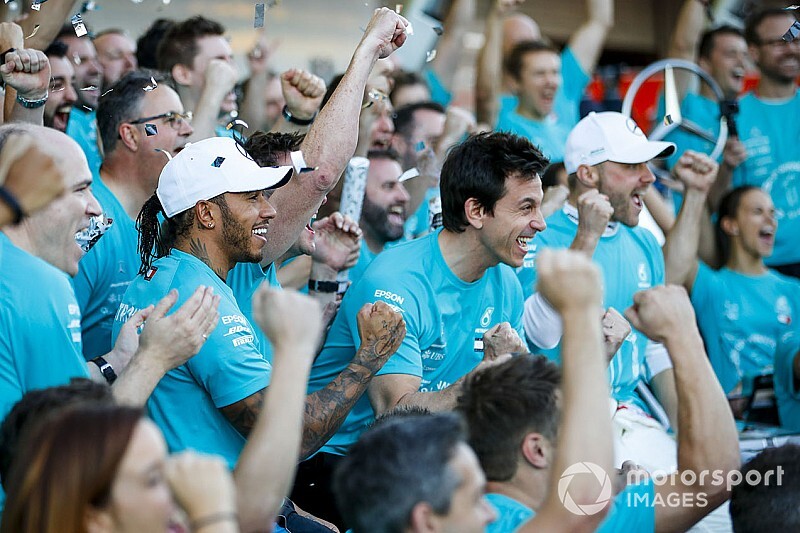 Three-time F1 champion Niki Lauda died earlier this year, leaving a hole in the team that he had helped play a role alongside Toto Wolff in guiding to the top of the sport.

But while Mercedes' record-breaking run is something everyone at Mercedes is proud off, Hamilton says the shine has been taken off the 2019 success.

"It definitely feels a little bit different," said Hamilton. "Obviously, I wouldn't say as happy as previously, because naturally we lost Niki this year and it doesn't feel the same without him.

"Naturally I'm very, very proud of the team. Very proud of everyone back at the factory, and I know Niki would be taking off his hat for today's result.

"I think we owe him a huge amount and this win is really for him. I think the whole team and the whole of Mercedes will probably dedicate this to Niki. I definitely do. Very, very proud to be a part of it, and a part of the journey – but it has been a difficult, a tough year for us, you know?

"Every time I walk into the garage I see Niki's headphones and his cap. I sat and I looked at it today before I got in the car.

"As I said, I know he'll be proud, I know his family will be as well. The team should be proud too."

Valtteri Bottas, who has played his role in the last three constructors' championship successes, said being at the centre of the triumph meant it was sometimes a bit difficult to appreciate what had been achieved.

"We're making history and, it's funny with anything you do, if you are getting success, and so on, sometimes it's quite tricky to realise that success," he said.

"Sometimes you have to step outside, a step or two to realise it really. I'm sure we will look back at this afterwards at some point, that wow, we made six and obviously hopefully more. But this moment, yeah, I hope we all can really appreciate it and take the time to enjoy it as well, even though we need to keep pushing.

"It just feels like life goes pretty quickly onwards and it's very important to enjoy those moments and, at least personally for me, I'm really, really proud, really happy for every single team-member.

"I know the amount of work that has gone into achieving it. So very, very happy for everyone and I just hope everyone realises that and enjoys it because it's well-deserved."