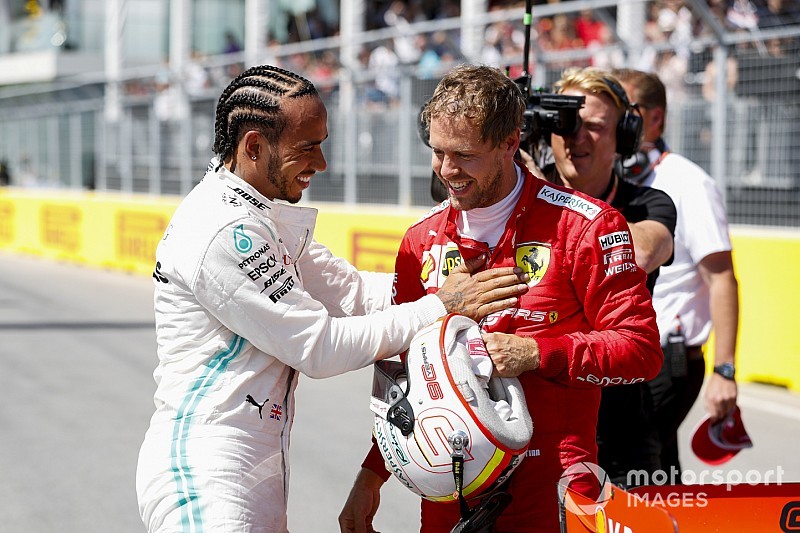 Hamilton leads the championship after four wins from the first six races, and teammate Valtteri Bottas has won the other two grands prix to give Mercedes a perfect record so far.

Ferrari, by contrast, has only scored four podiums and Vettel's Montreal pole is his first in a so-far tricky season for the four-time world champion.

Asked by Motorsport.com if he would like to see Ferrari this competitive elsewhere after being forced to settle for second place Hamilton said: "This is fantastic for the sport.

"I love to fight with another team, and today was just so close. I had no idea where we're going to be. At some stages they were ahead of us and we were swapping all the way.

"I hope this is a turning point for them and it's going to be very close from now on, and we're going to have a serious battle throughout the season. That would be fantastic."

Hamilton was on provisional pole after the first runs in Q3 but was overhauled by Vettel on the second runs and said Ferrari was "killing" Mercedes down the long back straight in the final sector.

Vettel complemented that sector three performance with a strong first sector that almost matched Hamilton, who was slightly slower in sector three compared to his first run.

However, he was wary of declaring Ferrari could use this as a springboard at other races after acknowledging the track layout plays to its strengths.

"We know we still have to catch up," he said. "This track maybe favour us a bit more. We had more top speed at all the tracks so far and this is a track where top speed is a bit more relevant, not too many corners.

"The team is pushing very hard, the whole of Maranello is throwing everything at it to try to give us a better car and make it better races to come."

Vettel said his car was "shouting 'keep going, keep going!'" on his lap, which secured him his first pole since the 2018 German Grand Prix almost one year ago.

Asked by Motorsport.com to describe his emotion, Vettel said: "This is one of the tracks where you need to dare going very close to the walls in many of the places.

"It's very bumpy, very rough. If you get it right it feels great. I think I got it quite right. Then you finish the lap and you're full of adrenaline.

"I saw I was a big chunk down and then improving as I crossed the line, then I was looking up and I didn't know who was coming behind. Then I heard them screaming 'pole position!' so it was just pure joy, mixed with the adrenaline. I'm not a singer, but I was screaming quite hard."