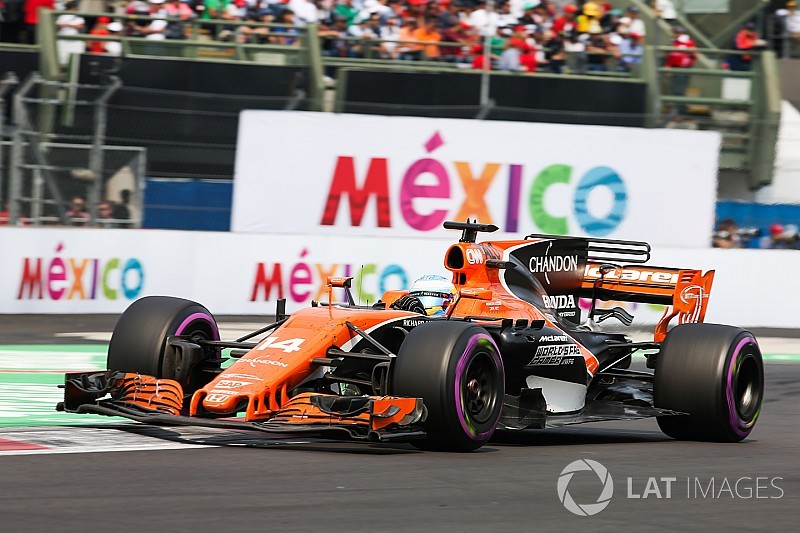 Honda chief Yusuke Hasegawa admitted the Japanese manufacturer's engine was not expected to have the performance it did during the Mexican Grand Prix weekend.

Honda chose to make engine component changes on both Fernando Alonso and Stoffel Vandoorne's McLarens for Mexico, where it felt it would struggle, in favour of having fresher elements for the final two races of the season in Brazil and Abu Dhabi.

But the outfit showed good pace throughout the Mexican GP weekend, with Alonso fifth in Q1 and declaring he had the best car in the field before going on to finish 10th in Sunday's race.

"The performance was much better than we thought," Hasegawa told Motorsport.com.

"Before we came here, we thought our engine performance was worse than the other teams and the effect from the high altitude would be bad.

"But Sakura has worked hard to create a good set-up for this high altitude, which is why the engine power deficit was much smaller than we thought.

"This gap [to our rivals] is smaller. The relative performance is still a bit behind, but we think we can catch up."

Hasegawa pointed to gains made on its dynos at its Sakura base as a reason for Honda's form at Mexico, where the high altitude puts a strain on the engines.

"Previously, we couldn't create a good dyno system to evaluate the high altitude situation," he said.

"[Correlation] is getting much better from the beginning of the season.

"It is not 100 percent copying the circuit situation, so still we need to work but we are almost satisfied with the situation. This circumstance, the high altitude in Mexico, is unique, though."