Honda announced at a press conference in Tokyo on October 4th that it has acquired a 100% shareholding of the BAR team. The manufacturer bought 45% of the shares in July last year and has now taken over British American Tobacco's (BAT) 55% majority ...

Honda announced at a press conference in Tokyo on October 4th that it has acquired a 100% shareholding of the BAR team. The manufacturer bought 45% of the shares in July last year and has now taken over British American Tobacco's (BAT) 55% majority share, the deal to be completed by the end of this year. 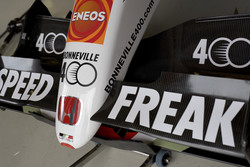 "After discussing Honda's future F1 participation, we have decided that Honda should own 100% of the team," said Honda's Hiroshi Oshima. "We greatly appreciate the partnership of BAT, which has managed the team with us until now, and we wish BAT the best of luck in its future endeavours."

"From next season, we will be even more energetic in our F1 activities, working hard as a team in order to improve our technology, develop our young engineers and achieve our goal of winning the World Championship. We look forward to your continued support."

Honda previously enjoyed success with Williams and McLaren in the 1980's before withdrawing from F1 in the early nineties. The manufacturer re-entered the sport as BAR's engine supplier in 2000 and has strengthened its ties with the team ever since.

BAT has been expected to leave F1 since the banning of tobacco advertising in Europe but intends to remain as the team's title sponsor, through Lucky Strike, for next season. A statement confirmed that BAT will quit F1 at the end of 2006.

"It will be sad to end our association but it is immensely satisfying to leave the team in the competent hands of Honda who are proven winners in the sport," said BAT's marketing director Jimmi Rembiszewski. "We wish Honda every success for the future and look forward to our last year of sponsorship."

Jenson Button and Rubens Barrichello are already confirmed as race drivers for next year, Honda previously acquiring shares in BAR being instrumental in Button wanting to stay. The team will continue to be based at Brackley, Northamptonshire, and will work together with Honda Racing Development in Berkshire.

A new team next year?