Lewis Hamilton's warnings about his engine getting too hot during his pursuit of Sebastian Vettel at the Australian Grand Prix has highlighted how on the edge cooling requirements are in Formula 1.

Teams well know that the less cooling required, the more performance they can get from a closed off car, but there is a big risk of things overheating.

In Mercedes' case with its W09 in Melbourne, what was effective enough cooling for clear laps in qualifying and when leading at the start of the race was not much use when stuck in the hot air of a car in front.

The balancing act over cooling/aero will be even tougher in Bahrain this weekend, with temperatures much higher than Australia.

But just as Mercedes has pushed hard to improve the aerodynamics of its car this season, it has not neglected to step things up when it comes to delivering the best cooling solution. 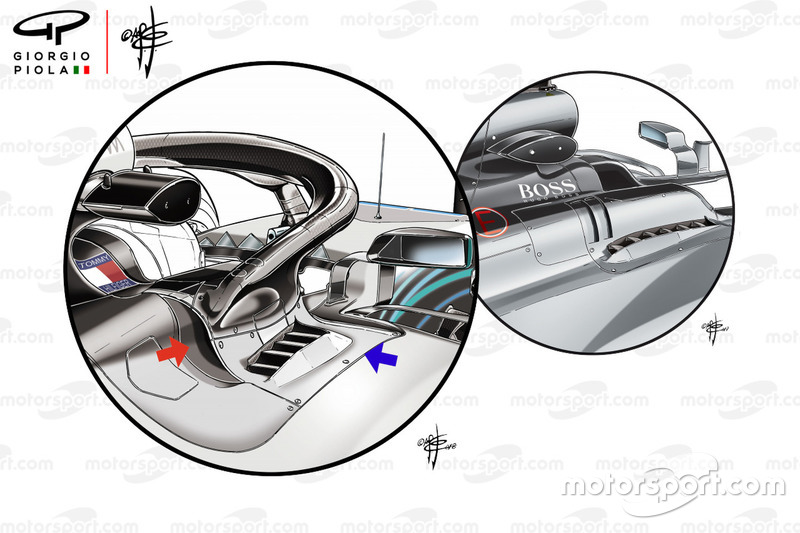 It has opted for a clever way of installing its halo, with the boat tail section at the rear of the safety structure crafted into a cooling exit (red arrow).

It's not dissimilar to the solution used when cooling demands were at the most extreme last season (inset), as the team exchanged the normal blank panel alongside the cockpit for one that included two vertical cooling slits when it was needed.

What has changed this year is the fact that the cooling slot appears to be more permanent, with interchangeable panels fitted depending on what the individual cooling requirements are. 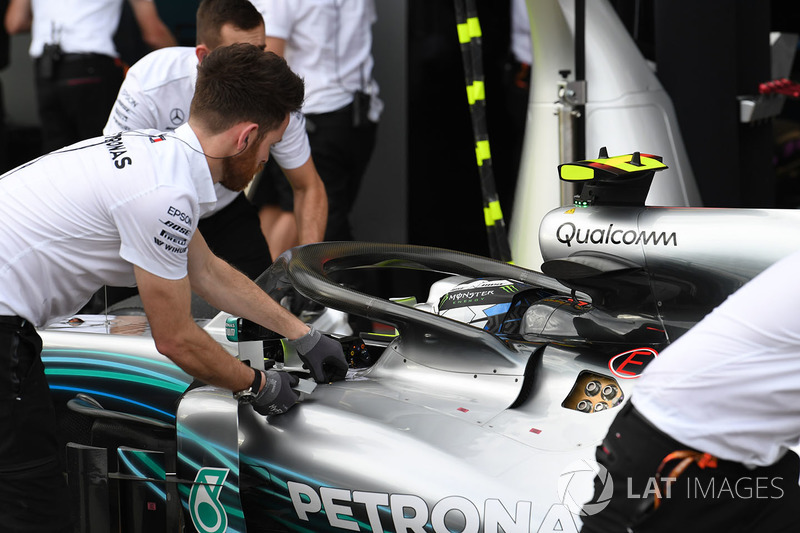 For Australia, the team opted to run the W09 with a blank panel, relying on only the new exit and the main cooling exit at the rear of the car.

But while this proved perfect for the conditions on Saturday, as air temperature increased on race day it may not have been ideal.

Both Lewis Hamilton and Valtteri Bottas noted how difficult it was to follow other cars and keep their power unit in the optimum temperature window, leading to them having to back off and pull out of the lead cars wake on the straights.

Lewis Hamilton said: "I was on the limit, pushing, but always nervous of damaging the engine at the same time.

"I cooled it down and then when I got relatively close, it came back. So I was constantly being pushed and pulled."

Valtteri Bottas added: "I couldn't put pressure on other cars, I could only follow for two laps and then back off and try again."

Bahrain will offer us a fascinating insight into how much aerodynamic performance Mercedes is willing to sacrifice in the bid to ensure it gets its cooling spot on.

The evidence that dismisses Haas-Ferrari critics

Hamilton: Red Bull has eked ahead in F1 title battle

Horner: Red Bull can beat Mercedes anywhere if it wins in France

Hamilton: Red Bull has eked ahead in F1 title battle