How Tilke carved out a unique F1 circuit in record time

In less than a year, circuit architect Carsten Tilke delivered the challenge of developing and building a unique Formula 1 circuit in a country where the premier class of motor racing has never raced before – resulting in the fastest street circuit ever.

The German architectural firm Tilke was responsible for the development and construction of the Malaysian circuit of Sepang, the Yas Marina Circuit in Abu Dhabi and the Circuit of the Americas in Austin, Texas, among others.

With the brand new Jeddah Corniche Circuit, however, the firm of founder Hermann Tilke has pushed its own boundaries. In less than 12 months, a brand new street circuit was built in Saudi Arabia.

Hermann now runs his company together with his son Carsten, who has just paid another visit to the port city in Saudi Arabia when he updates Motorsport.com Netherlands on the current state of affairs. In the last few months many people have asked whether the 27-turn circuit would be ready in time, or whether Formula 1 would have to look for a replacement venue for the penultimate Grand Prix of the season.

'One of our most ambitious projects'

"It was really a monster job," he says. "For the whole project we had less than a year. We only started building the circuit in April. We've developed a lot of big Formula 1 circuits before, but never in such a short time frame. This is really a new world record for us. So we are excited to see everything come to life in two weeks."

With the Jeddah circuit nearing completion, one of the most ambitious projects in the company's rich history is coming to an end for Tilke.

"However, this is definitely one of our most ambitious projects so far because of the short time we were given to do it. We got involved a year ago and knew it had to be ready in 12 months." 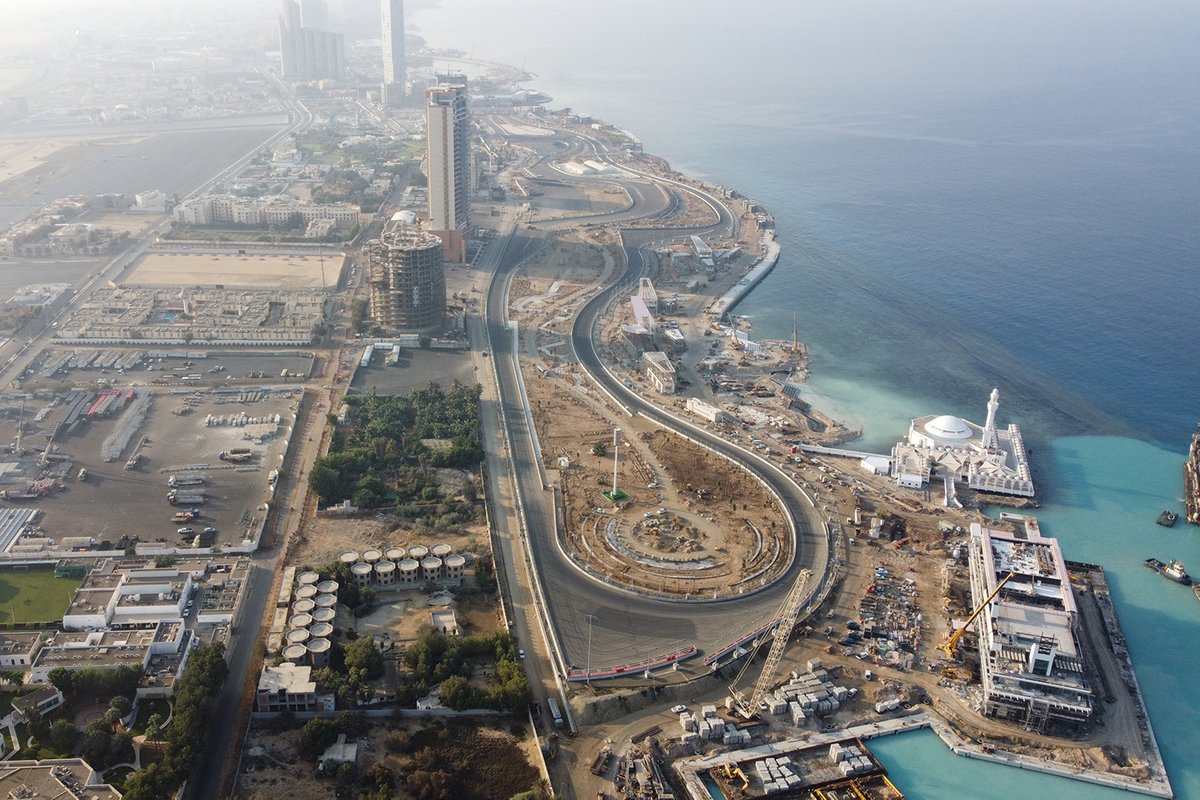 The location of the very first Formula 1 circuit in Saudi Arabia, the organization had in mind for the so-called Jeddah Corniche, a coastal resort along the Red Sea, which made the challenge for Tilke even greater.

"It's not a normal street circuit," he says. "We had to build most of the streets ourselves and we had to install a complete drainage system, which meant we had to lift the whole track one and a half meters. So there was a lot of engineering involved.

"We also had to deal with the construction of a number of large buildings and there is still construction going on in the whole Corniche area. It will make for a beautiful setting, though."

Despite the fact that the unique location presented additional challenges, Tilke is happy with the spot.

"The Corniche is really a very beautiful place, so right next to the Red Sea," he says. "It will create a great atmosphere with the circuit right next to it. It is actually a narrow piece of land, which makes the track very narrow.

"However, that also has its advantages, because the spectators can often see two parts of the circuit. At one point the cars will be driving to the right and at the other to the left. Then you also have the sea as a background. It's a really cool setting.

"It's also going to look great on camera, especially when the sun goes down. I was there last night and every time I'm there - and I've been there many times - I'm speechless when I see the sun go down. Next to the circuit is also a mosque, it really makes for a great atmosphere.

"Part of a circuit goes along a lagoon, so you have water on both sides of the track. The cars then drive through the water as it were, that's something new we've introduced here."

Do you want to cheer on F1's stars in Jeddah? Then book your tickets here!

Besides the beautiful pictures, the track itself promises to be spectacular. The track itself is 6.174 kilometers long and has no less than 27 corners.

For the majority of these turns, the drivers hardly need to brake, which brings the average speed in Jeddah to over 250 kilometers per hour. This makes the track the fastest street circuit on the F1 calendar.

In fact, only the Monza circuit, known as 'The Temple of Speed', has a higher average speed.

"The circuit is really very fast and I would really like to hear the first reaction of the drivers when they return from their first laps," Tilke continues. "In the simulator it was already quite a nice circuit to drive on.

"It's challenging, with a number of fast twists on the one hand and a 12 percent banking on the other. There are also a lot of full throttle sections, but you never really have to deal with a straight. So the drivers have to stay focused, especially with the walls so close to the track. Then we also have three potential DRS zones. It's really very fast." 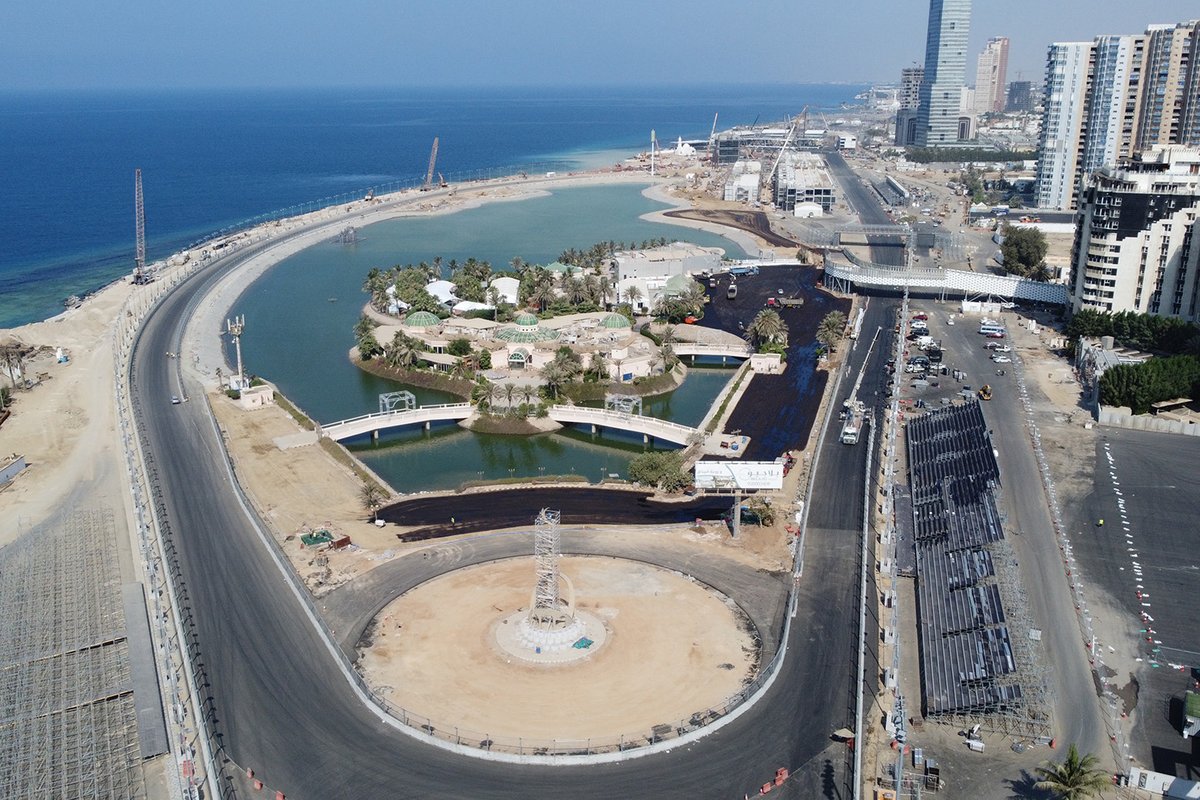 "Hopefully not," he replies. "We are working closely with Formula 1, with Ross Brawn's team that also conducted the initial studies on the circuit and the initial layout. We worked with that and determined the final layout with them.

"They did a lot of simulations using their own model. Hopefully it will work, because they expect the track to lend itself best to overtaking."

In addition to the necessary overtaking actions, Tilke also expects a lot of spectacle at the first corner during the race.

"We have created a stadium section right after the first corner, which will really be something special," he reveals. "It's a very cool place for the spectators to follow the action because you can see the first corner there. It's going to be spectacular in the race.

"In addition, at that point you can also see the cars going the other way at high speed, at a point where they have to apply the brakes a little bit and then accelerate again. In that spot, you will see cars driving continuously. I think that's the best place to watch the race, but also in other grandstands you have nice spots where you can see two different parts of the track.

"It makes it really special because the track itself is so narrow. In addition, one part of the track is also slightly higher, so you can really see two parts of the circuit."

In two weeks the Formula 1 engines will be started for the first time in Saudi Arabia. The first free practice session for the inaugural Saudi Arabia Grand Prix is scheduled for Friday, December 3 at 4:30 p.m. local time. The race will be run on Sunday evening at 20:30 local time.

Do you want to attend the first Formula 1 race in Saudi Arabia? There are still tickets available. Take a look here at the official website of the Grand Prix and order soon.

Why Mercedes' right of review into Brazil F1 incident was denied