Nico Hulkenberg has been give a 10-place grid penalty for the Italian Grand Prix for his part in a first-corner crash in Belgium. 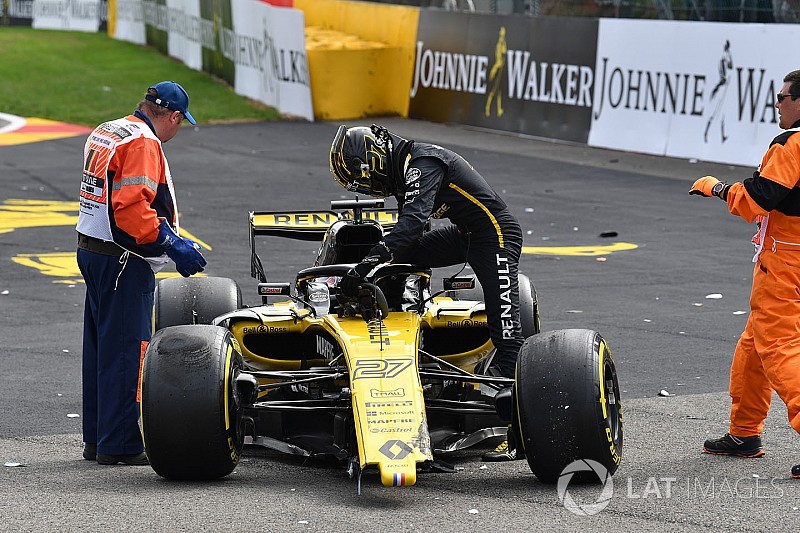 The German braked too late for the first corner at Spa-Francorchamps and slid into the back of Fernando Alonso – pitching the McLaren over the top of Charles Leclerc.

Following an investigation by the stewards, it was decided that the Renault driver had been guilty of causing the crash and would be moved down the grid for Monza. He has also been handed three penalty points on his superlicence.

A statement from the FIA stewards said that: "The driver of car 27 [Hulkenberg] stated that he completely misjudged the situation and freely admitted it was his mistake."

Although Alonso had suggested that there were similarities between the Hulkenberg incident and the 2012 crash that earned Romain Grosjean a race ban, such a drastic punishment was not considered this time.

In their explanations, the stewards pointed out that the penalty points system had been introduced as a mean of ensuring repeat offenders were sanctioned more heavily – something that was not in place six years ago.

"It should be noted that since 2014 the FIA has introduced the penalty points system which takes into account previous offences by a driver and can lead to a race suspension if 12 points are accumulated within a 12 month period," said the stewards.

"This system was not in force when an incident not dissimilar to this, occurred in 2012."

Hulkenberg was clear that the mistake was wholly his, although he suggests he was slightly caught out by the aero disturbance caused by other cars around him.

"It's just incredible to find out again on lap one how sensitive these cars are with aerodynamics," he said.

"When you have a few cars that bunch up in front of you, how much grip and load you lose and when I hit the brakes I instantly locked up the front wheels and was then just sliding into Fernando.

"Probably [a] misjudgement from my side, a bit too late on the brakes, a bit too keen. Frustrating for him [Alonso], for Charles as well, but also for myself."

Ocon: I needed one more metre to lead race