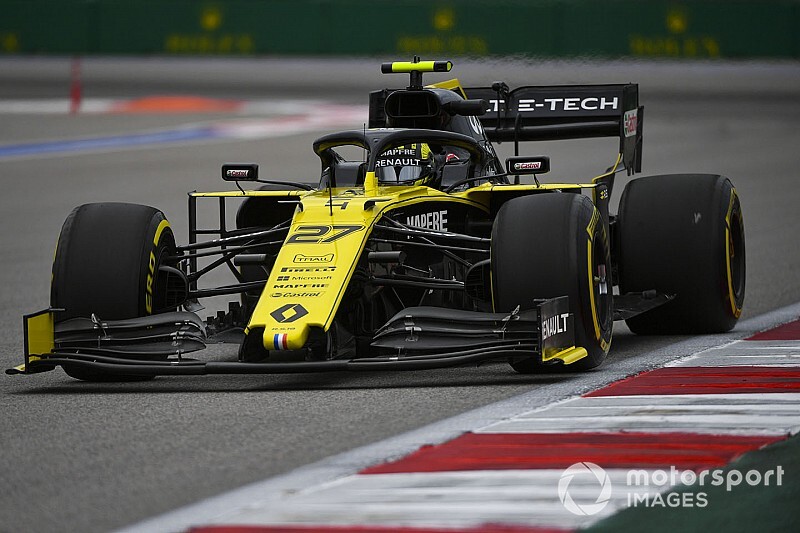 Nico Hulkenberg says his Russian Grand Prix result feels "bitter" and was not what the pace of his Renault RS19 Formula 1 car deserved.

Hulkenberg had the edge over teammate Daniel RIcciardo all throughout the weekend at the Sochi Autodrom, and duly put himself sixth on the grid for the race.

However, the combination of a subpar opening lap, a slow pitstop and a poorly-timed virtual safety car brought out by Sebastian Vettel left Hulkenberg on the back foot.

Asked if the sole point he'd picked up for finishing 10th was bittersweet, Hulkenberg said: "No, just bitter, not sweet enough today.

"It started with a poor start, poor first lap and lost three or four positions, then I raced back, recovered one position or something.

"We wanted to undercut but the slow pitstop put us right back. And in this field every tenth matters.

"If you lose a couple of seconds, that’s bad, and we had to push on and use my tyres a lot, which is always difficult towards the end of the tyre life stint.

"Then there was a virtual safety car which went against us too, I think two guys sneaked by again, so it kind of all unravelled against us today.

"Unfortunate, because I feel the car deserves much better, I had really good pace in the car but could never really show it because I was stuck behind someone. So yeah, a little bit frustrated."

Hulkenberg could've gained an extra place at the chequered flag due to Kevin Magnussen's looming five-second penalty, but a loss of power "in the last 10 laps" meant he was unable to take advantage.

With Daniel Ricciardo retiring as a consequence of an opening-lap collision, Renault took away just a single point from Sochi and has dropped to 33 points off the midfield's benchmark team McLaren.

"Today, we lost points again," Hulkenberg said when asked about Renault's ambitions of snatching fourth place in the team's standings from McLaren.

"I don’t know what the gap is, [but] it’s a lot, and every race that goes by and we don’t outscore them it obviously gets more difficult.

"Whilst we want to fight in the championship we need to focus race by race and get everything out of it to stay clean and smooth and I think that’s all we can do."

Tech verdict: How Ferrari really turned the tables on rivals