Hulkenberg: Renault "left points on the table" at Silverstone 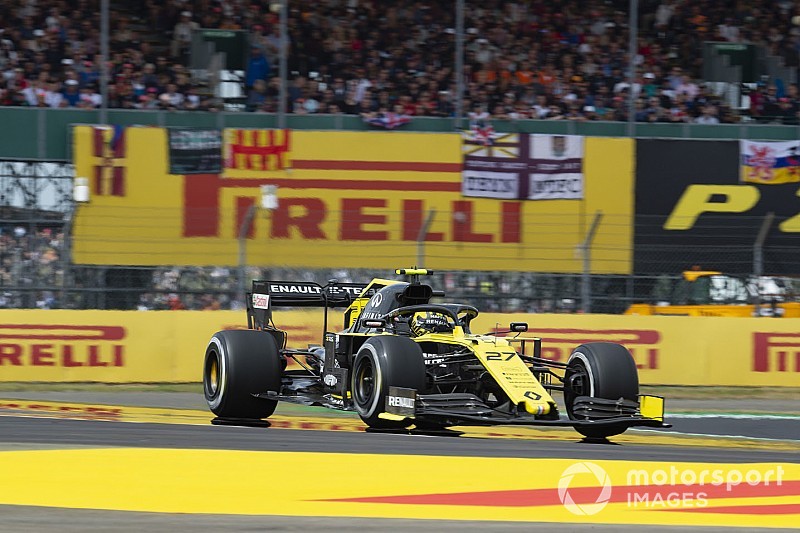 Hulkenberg picked up the final available point in 10th place, but both he and Abiteboul admitted that his sole pitstop had come too late on lap 13, as the outfit was prioritising his teammate Daniel Ricciardo running ahead on track.

Hulkenberg described his race as "not fantastic", ruing a suboptimal strategy alongside a host of other issues.

“I think we left some points on the table today and we didn't get the strategy right in my eyes," he said. "We pitted too late on the first stop because I was really in trouble with the tyres.

“The safety car was not perfect for me or my race and then I was hit by Checo [Perez] after the restart, lost a position to Kimi [Raikkonen], we had an engine problem at the end and I lost engine power for the whole Hangar straight and ended up in kind of a limp home mode, fell back a lot then got it going again after a few default actions.

"All in all not fantastic, and quite surprised to still get a point with all of those problems.”

Abiteboul understood that Hulkenberg could be left frustrated by the way the race had played out.

"We didn’t really help his Sunday," he told Motorsport.com. "He had a challenging race, with a number of small things – including a stop that was probably called too late, we were very focussed on Daniel and Lando [Norris], and very focussed on when to stop, the undercut/overcut.

“In an action-packed race that’s never easy, with tyres that are never easy to read. We stopped a bit too late for Nico, lost a position, and he was a bit on the back foot from that point onwards.

"He had a small issue with the engine losing a bit of power die to a sensor problem, which had to be put on default, and that cost him another position. So overall we made Nico’s race a bit complex.

“I think due to the fact he was on the back foot his mindset could have been in a better place with the first stop.

“But having said that we could have made his Sunday a bit easier than it’s been, and take more points overall for the team. But what hurt us most is the safety car.”