Martin Whitmarsh dismissed the paddock perception that McLaren had ruled Hulkenberg out because of his weight.

Oct.15 (GMM) Nico Hulkenberg, the new key to unlocking the remainder of the 2014 'silly season', has not signed a deal yet.

That was the claim on Tuesday of his manager Werner Heinz, amid reports German Hulkenberg has now committed to a team for next season.

Lotus boss Eric Boullier on Monday was quoted as saying 26-year-old Hulkenberg was the team's "choice" 2014 pick, but he has also been linked to Force India, McLaren, or even staying at Sauber. 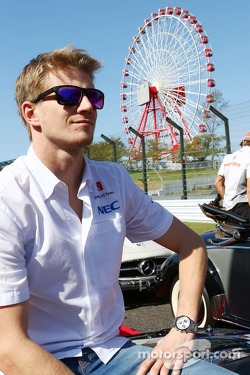 "I think Hulkenberg is still a little undecided, because there could be the opportunity to go to McLaren," said Marc Surer, a pundit for German television. "That would be tempting."

McLaren boss Martin Whitmarsh said: "Nico is intelligent, he showed good performance in the junior categories, and now in Formula One.

"I think he is on some teams' lists," he hinted.

Whitmarsh dismissed the paddock perception that McLaren had ruled Hulkenberg out because of his weight.

"There was a lot of talk about this recently," he said, "but I don't think he is so big that he can't fit into a cockpit.

"I think he's good enough to be in Formula One next year, and I'm sure he will be," Whitmarsh added.

The problem, Surer explained, is that Hulkenberg would replace the underperforming Sergio Perez, while McLaren and Honda hope to sign Fernando Alonso for 2015.

"So they would not give anyone a long-term contract because they are holding a place (for 2015) open," he said.

"I wouldn't go to McLaren for just one year. I'd rather go to Lotus," said Surer.

It wasn't too long ago that some feared Hulkenberg might be lost to F1 altogether, because he is not heavily sponsored, and because he is too heavy for the new, V6 engines.

Did Lotus' serious interest in the German trigger a tug-of-war for his services? "Maybe it did," smiled Boullier.

"I don't know. I think in a few days we will decide something."

Hulkenberg's manager denied that a deal has already been done.

"We are continuing to sort through the options. No decision has been made," Heinz is quoted by the SID news agency.

"His chances have definitely not been made worse by his recent good performances. So I'm not worried and I am firmly convinced that Nico will continue to drive in Formula One," he added.