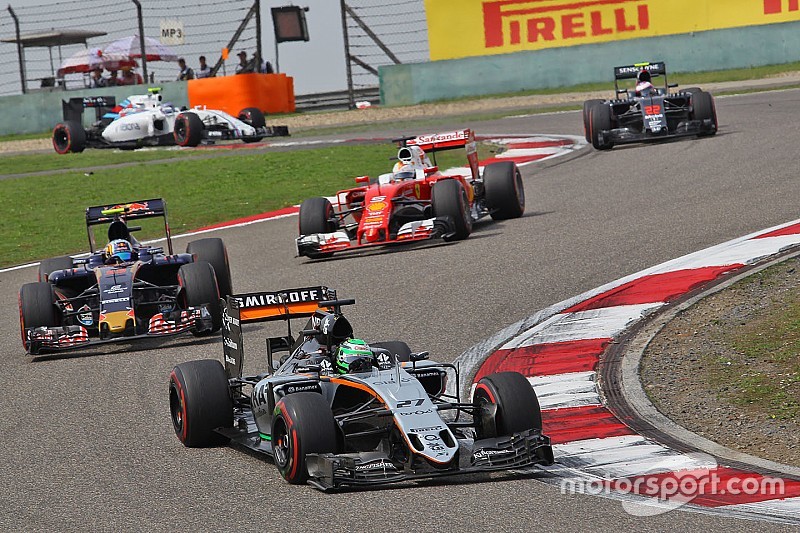 Nico Hulkenberg feels the safety car interruption, together with high tyre wear cost Force India the chance of a strong result in the Chinese Grand Prix.

Both Sergio Perez and Hulkenberg made a lightning start to be third and fourth after Daniel Ricciardo's puncture, but a subsequent safety car meant the team had to react with an early double pitstop.

“It was a frustrating race in the end, even though the start and the first few laps were great," said Hulkenberg after the race.

"As the lights went out, I rocketed from P13 up to fifth place, picking up one place after the other.

"The safety car threw all this good work out the window because I had to stack in the pits behind Checo  [Perez] and dropped right down the order," the German added.

A Lack of pace, a time penalty and high tyre degradation put Hulkenberg in only at 15th at the finish, albeit the German salvaged the fastest lap of the race with a time of 1m39.824s - Force India's fourth since 2008.

"The dirty air affected us, we had some faster cars coming through and this destroyed my tyres," he added.

"In fact, tyre degradation was the main story of the day and we appeared to suffer more than some others, which is why I went backwards in the second half of the race."

Even though teammate Perez finished 11th, just outside the points, after being overtaken by the Toro Rosso duo, the Mexican felt the three-stop strategy was the right call.

"I think we chose the right strategy and made good choices, but the race didn’t go our way," said the Mexican.

"The start of the race was really good and things looked very promising. I was up in third place when the safety car came out and we had no option but to pit, which dropped me back into the pack.

"I had to fight hard because the cars around me were on different tyres and there were some quick cars recovering as well. All of this took a lot of the life from my tyres.

"There were some entertaining battles during the race and we put up a good fight, but the points finish slipped away in the final part of the race," he added.

The FIA levied a fine of 5,000 euros on Force India for releasing Perez in an unsafe manner during his first pitstop.

The incident took place under the safety car period, when the Mexican was released in the path of approaching Carlos Sainz and Fernando Alonso.

The statement read: "Car 11 [Perez] was released from the pit stop in an unsafe manner; the approaching cars being well past guidance markers when the car was released by the team.

"The driver took appropriate action to avoid a collision and no sporting advantage was gained by the driver."