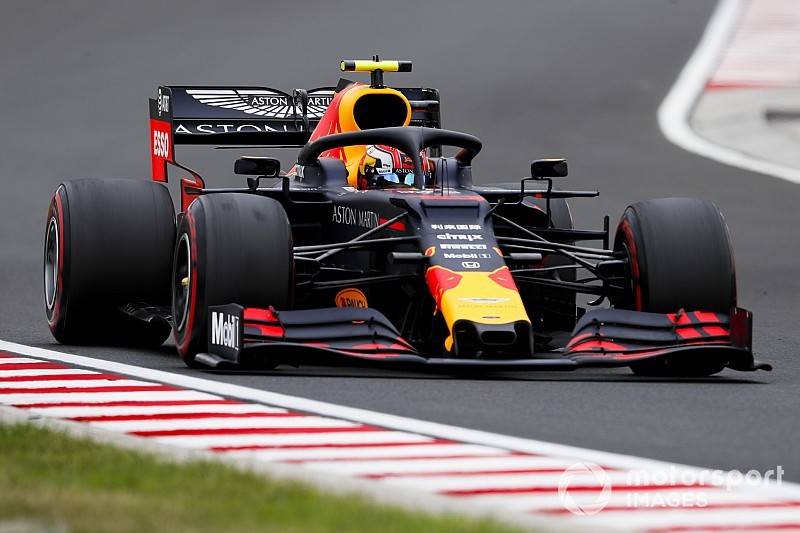 The 90-minute session started with rain widely anticipated, meaning teams were eager to get on track to capitalise on the dry conditions.

But they were interrupted by the session being red-flagged after three minutes thanks to Alex Albon crashing his Toro Rosso at the final corner.

Albon touched the grass with his left wheels and was pitched sideways into the barrier at the right-hander, subsequently admitting it was "driver error".

After a six-minute delay, the session resumed and with very light rain sporadically falling the drivers headed out on a variety of different tyre compounds while they could still use slicks.

Mercedes driver Valtteri Bottas was the first to set a new fastest time, posting a 1m18.289s on mediums that displaced Kimi Raikkonen's effort from the initial three minutes of running.

Teammate Lewis Hamilton then eclipsed him with a lap of 1m18.110s on hards, which he subsequently lowered to a 1m17.995s.

Red Bull driver Max Verstappen then hit the front on mediums, setting a time of 1m17.909s.

But Gasly then set his fastest time, a 1m18.854s to secure top spot shortly before the track was officially declared wet after 22 minutes when the rain intensified.

Nobody was able to improve their times in the rest of the session, although everyone except the eliminated Albon did run on intermediates and Carlos Sainz even ran a single lap on slicks.

Verstappen held onto second place with his lap, 0.055s slower, ahead of the two Mercedes drivers, with Hamilton ahead of Bottas.

Renault driver Daniel Ricciardo was briefly as high as second with his pace on softs before being shuffled down to fifth fastest, 0.743s off the pace.

Raikkonen ended up as the best-placed Ferrari-powered car in sixth place, ahead of the lead works car of Charles Leclerc, who used mediums for his fastest time.

Sebastian Vettel ran on hards when the track was dry, ending up 13th and 1.400s off the pace – also having an off-track moment when he cut the Turn 6/7 chicane.

Sainz was best of the McLarens in 14th with a time 1.544s down on medium rubber, with Racing Point's Sergio Perez on hards three tenths further back.

Lance Stroll also used hards to take 16th place ahead of the soft-shod Williams of George Russell, who was only two seconds off the fastest time.

McLaren driver Lando Norris lost track time early on to a minor hydraulic leak that manifested itself when he first went out, but did use mediums to set 18th fastest time.

Robert Kubica was 19th and slowest of those to set a time, with Albon not having completed a flying lap before his crash.

Verstappen: Spins down to set-up experiments