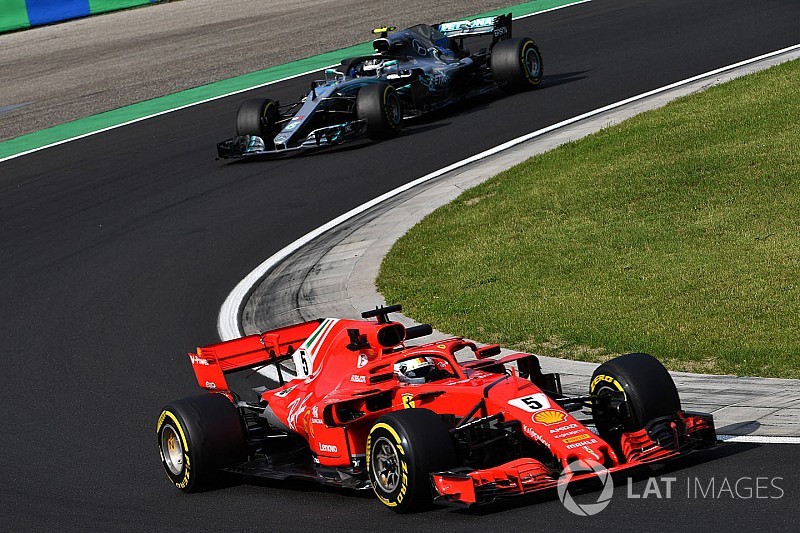 Sebastian Vettel topped final practice for the Hungarian Grand Prix as drivers Lewis Hamilton and Valtteri Bottas both spun during a mixed session for the Mercedes Formula 1 team.

Vettel and Ferrari had ended Friday on top and continued that form ahead of qualifying in Budapest, setting the pace on a 1m16.170s.

Bottas and Mercedes hit back from a disappointing Friday by lapping just 0.059s slower than Vettel, but Bottas and Hamilton had tricky sessions.

Vettel was fastest at the halfway mark of the session after ending his first flying laps almost half a second clear of what Mercedes could manage on the initial runs.

In the final bout of qualifying simulations Bottas briefly went fastest on a 1m16.229s, at almost exactly the same time as Hamilton spun at the chicane.

Hamilton lost the rear under braking and skated sideways across the kerb at the apex of the second part of the corner before coming to a rest on the track and facing the wrong direction.

The championship leader, who has new control electronics and a new energy fitted to his Mercedes, continued but struggled to post a competitive laptime.

Vettel then reclaimed top spot from Bottas, who then suffered a bigger scare than Hamilton at the chicane.

Like his teammate, Bottas lost the rear on entry, but the Finn's car swung across the inside of the track and across the grass, facing the wrong direction, and made light contact square with the barrier on the outside.

He resumed and made it back to the pits before returning to the track, but did not improve.

Bottas remained Vettel's closest challenger as Raikkonen could not get closer than 0.203s adrift of his teammate, with Hamilton fourth and more than half a second off the pace.

The Red Bulls slipped from top-three pace on Friday to rounding out the top six in final practice, with Daniel Ricciardo and Max Verstappen 0.6s and 0.7s off the pace respectively.

There were plenty of traffic incidents in a frenetic session, with Ricciardo catching a Haas exiting Turn 3 on his first real flying lap and Hamilton also losing out early on as he caught slower cars.

Later in the session Sergio Perez, who was revealed to have brought action against his Force India team that led to it being placed in administration, remonstrated against a Toro Rosso while Charles Leclerc almost tripped up over Verstappen's Red Bull immediately after being passed into Turn 1.

Carlos Sainz and Nico Hulkenberg consolidated Renault's position as best of the rest ahead of qualifying with the seventh and eighth fastest times, as Romain Grosjean (Haas) and Pierre Gasly (Toro Rosso) complete the top 10.

Stoffel Vandoorne spent a large chunk of the session in the garage as McLaren fit a new floor that was sent over from the factory.