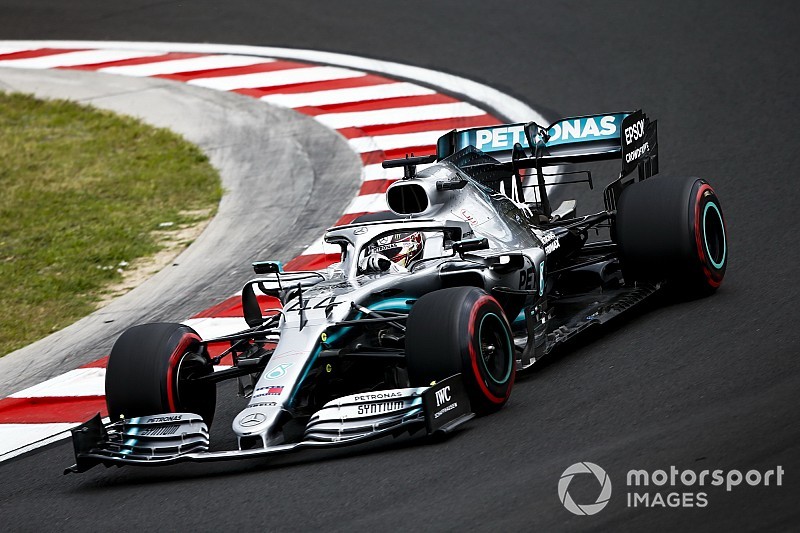 Lewis Hamilton set the pace in opening practice for the Hungarian Grand Prix while Mercedes Formula 1 teammate Valtteri Bottas failed to post a time after an engine problem.

Hamilton headed a three-team fight at the top of the times in the Hungaroring's first 90-minute session, besting the Red Bull of Max Verstappen and Sebastian Vettel's Ferrari.

The trio was covered by 0.166s of a second around the 2.7-mile circuit as Pierre Gasly completed the top four.

Charles Leclerc was out of position in the second Ferrari in sixth and that, combined with Bottas's trouble, allowed Kevin Magnussen to kick-start Haas's weekend with the fifth-fastest time.

The session began with a high risk of rain and a few drops fell in the first sector almost as soon as running started.

That did not translate into a downpour though and most teams were able to continue with their early installations uninterrupted.

However, Mercedes committed to changing Bottas's engine after two exploratory laps, which mean he sat out the rest of the session.

The team reported a problem with Bottas's original engine that it could not trace, so switched to another Friday engine already in the pool to give itself more time to analyse the issue.

Vettel headed the chase of Hamilton for much of the session, 0.166s behind, before Verstappen managed to improve his own time by a tenth to edge ahead of the Ferrari by just 0.001s.

Verstappen escaped two spins in the session without harm: he lost the rear of his Red Bull exiting the final corner early on, then towards the end found himself facing the wrong way on the run-off for the 90-degree right hander at the start of the final sector.

Leclerc was well adrift of the leading times after a scruffy lap on soft tyres left him 1.1s off the pace, and though he made a modest improvement before the session's ended he could not climb above Magnussen and ended up 0.955s off the pace.

Nico Hulkenberg led Renault's charge in seventh, 0.48s slower than midfielder leader Haas but ahead of the two McLarens of Lando Norris and Carlos Sainz.

Though teammate Magnussen was fifth, equipped with Haas's latest upgrade introduced in Germany last week, Romain Grosjean struggled in the second Haas and finished outside the top 10.

Grosjean is running the aero spec Haas started the season with as the team bids to get a better understanding of its race-pace problems.

However, Grosjean reported he had "everything: understeer, oversteer, it's like Monza wings" during the session, and wound up 12th-fastest.

At the tail end of the field, George Russell gave Williams early hope of fighting at the back of the midfield by lapping 2.4s off Hamilton's best and outpacing the Racing Point of Lance Stroll.

Early in the session, Stroll had a spin onto the grass exiting the chicane in the middle of the lap, but like Verstappen avoided any damage.