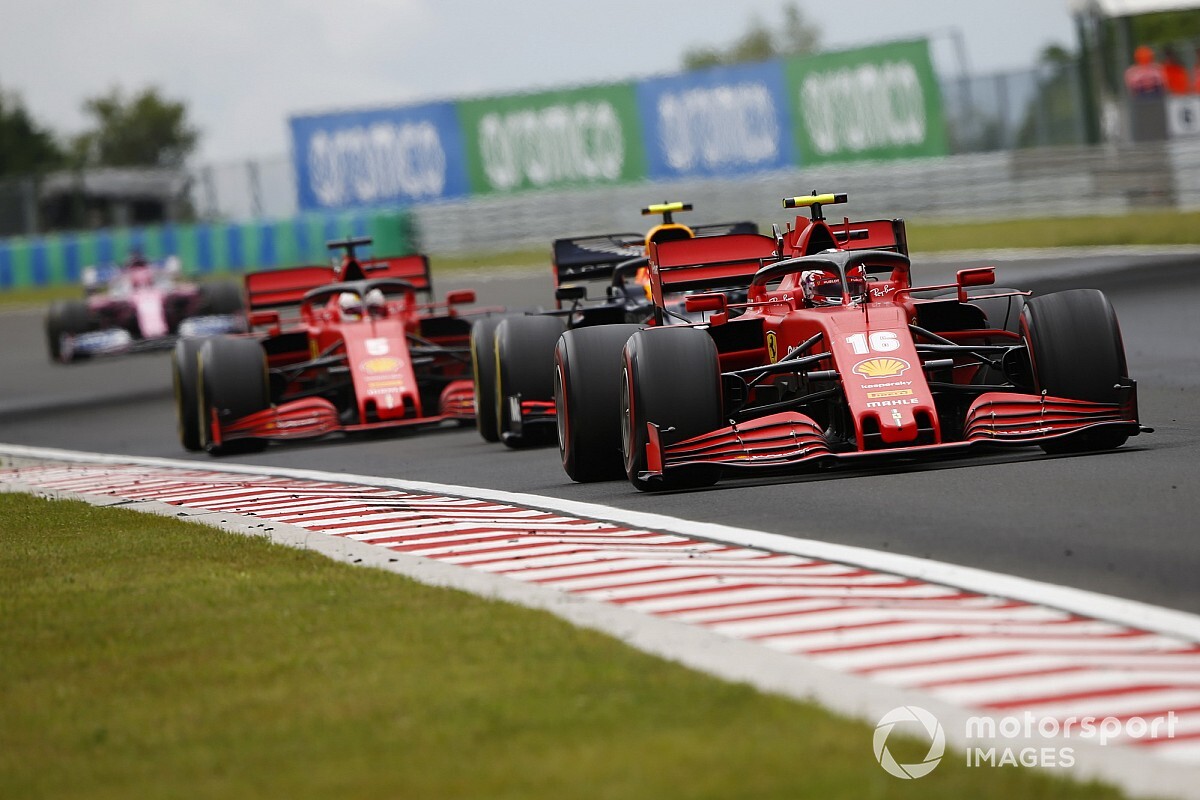 Lewis Hamilton won the Hungarian Grand Prix for Mercedes, the third round of the 2020 Formula 1 World Championship season at the Hungaroring.

There was drama before the start when Red Bull’s Max Verstappen hit the wall at Turn 12 in the damp conditions on his formation lap to the grid, requiring his team to fit a new steering arm and wishbone.

From pole position, Hamilton led the wet start from Racing Point’s Lance Stroll and was already 3s clear by the end of the opening lap. His Mercedes teammate Valtteri Bottas almost jumped the start, but managed to stop before he crossed the line, although he dropped to sixth.

Despite his pre-race drama, Verstappen made a great start and surged from seventh to third, ahead of Ferrari’s Charles Leclerc, who pitted for slicks at the end of lap two as the track dried quickly.

Hamilton pitted from the lead on the next tour, leaving Verstappen out front for a lap. Hamilton led by 5s after Verstappen’s stop, with the Haas drivers running third and fourth as Kevin Magnussen and Romain Grosjean had pitted for slicks at the end of the warm-up lap.

On his recovery drive, Bottas passed Leclerc for sixth on lap 10 and quickly caught the Haas duo and Stroll, who had passed Magnussen for third on Lap 16.

It took Bottas a good while to clear Stroll, and he pitted on Lap 34 to undercut him for third position. Bottas, who switched to more softs, then charged after the hard-tyred Verstappen.

Having failed to get close enough to pass him on track, Bottas pitted again with 20 laps to go, switching to fresh hard tyres. He closed to within a second by the end, but had to settle for third.

Hamilton won the race by over 8s, having stopped for fresh soft tyres near the end to set fastest lap.

Stroll held fourth place until the end, ahead of Red Bull’s Alex Albon, who drove a fine race after a wretched qualifying and grabbed fifth when Ferrari’s Sebastian Vettel ran wide late on. They finished just ahead of Racing Point’s Sergio Perez, who made an awful start and dropped to the tail-end of the top 10.

However, Albon is under investigation by race stewards for his team drying his grid spot ahead of the race.

Renault’s Daniel Ricciardo finished eighth, ahead of Magnussen. Leclerc paid for a bad decision to switch to soft tyres initially, and Sainz passed him for the final point inside the final 10 laps.

AlphaTauri’s Pierre Gasly was the only retirement, exiting the race in a cloud of smoke on Lap 17.

Binder was "lost" on KTM before following Pedrosa