Super Aguri confirmed on May 10th that the Formula One Permanent Bureau has withdrawn Yuji Ide's super license and he will not be able to race in F1 again this season. After an accident at Imola, when he pushed the MF1 of Christijan Albers into a ...

Super Aguri confirmed on May 10th that the Formula One Permanent Bureau has withdrawn Yuji Ide's super license and he will not be able to race in F1 again this season. After an accident at Imola, when he pushed the MF1 of Christijan Albers into a barrel roll, Ide was replaced by Franck Montagny in Europe. 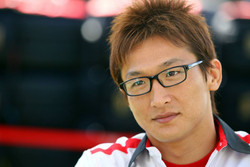 Ide had scant time in the car before the start of the season and the plan was to give him more mileage on the test track with a view of returning to competition once he had more experience. However, with the loss of his super license he will not be back in F1 this year.

"It is with sadness and regret that the team accepts this decision, however Aguri Suzuki and A.Company (Japan) shall continue to seek driving opportunities for Yuji and hopefully a path back into Formula One," said a statement from Super Aguri.

Montagny will continue in the second race seat for the Spanish and Monaco Grands Prix while "discussions with a number of parties continue regarding the permanent positions of second race seat and third driver within the team."