Do you know where the chequered flag was first waved, who got the weirdest ever black flag and why marshalling went digital? Find out this and more here…

The ‘Orange Army’ of volunteer marshals sits at F1’s front line, stationed around the circuit and armed with sets of flags and buttons and ready to respond in a split second to any dramas that happen on the track.

Flag signals were first used in F1 to communicate trackside to car in 1963. The track is divided into a large number of marshalling sectors – far more than the three timing sectors – and at the start of each one there is a ‘marshal post’ where the flags are waved to tell drivers of dangers on the track.

Winning in F1 is all about executing a highly tuned plan. The same applies to poker. See where your game plan can get you. Click here to start your game plan.

To supplement – not replace – the traditional marshalling flags, F1 now also uses a GPS marshalling system. Marshals use buttons to send flag signals directly to race control, circuit light panels and a set of LEDs on the driver’s dashboard, which light up when the related flag colour is waved.

There is a wide range of flags types in the marshals’ arsenal, so here’s a run-down of what they all mean and how they have been used in the past. 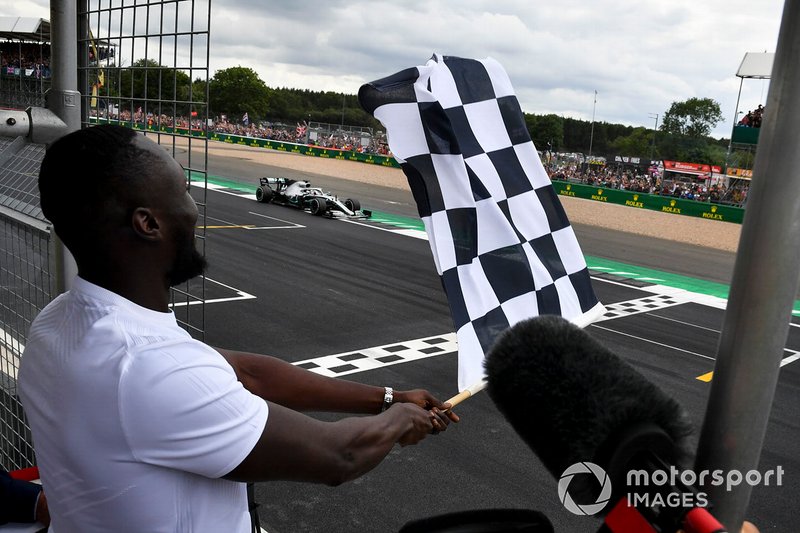 Everyone knows this is waved to the leader at the end of a race and also the end of every practice or qualifying session, but nobody seems to know exactly when or where the practice first started. There are a bunch of theories though.

Some point to origins in horse racing and others to French cycling races in the 1800s, but there is no evidence of either. The book ‘A flag worth dying for’ by Tim Marshall suggests it was first used at the Glidden Tours Road Rally in 1906, when chequered flags identified time checkers at the of each end stage.

However, the first genuine record of its use in motorsport is in a photograph from the Vanderbilt Cup in New York from that same year, 1906. It clearly shows a chequered flag being lowered in front of the oncoming French driver Louis Wagner as he came to cross the line for victory.

If you think that waving a flag is a pretty simple thing to get right, though, you would be wrong. In fact, five F1 races have been halted early – and the first time it happened the flag was in the hands of legendary five-time champion Juan Manuel Fangio!

That was in 1978, at the Argentine Grand Prix, when Fangio accidentally waved it at Ronnie Peterson’s Lotus after mistaking it for the other Lotus of race-leader Mario Andretti. It also happened to Alain Prost in Britain in 1985, Lewis Hamilton in China in 2014 and Sebastian Vettel in 2018.

To eliminate human problems, F1 switched from a flag to a light panel in 2019 – but towards the end of that season, in Suzuka, the panel went chequered for race winner Valtteri Bottas a lap before the finish! So much for technology! The board was scrapped soon after, and the flag returned.

On the rare occasion that the flag is waved early, the finishing order is classified at the point when the leader last crossed the line before the flag was waved. If it’s waved late, the race is deemed to have finished when it should have. 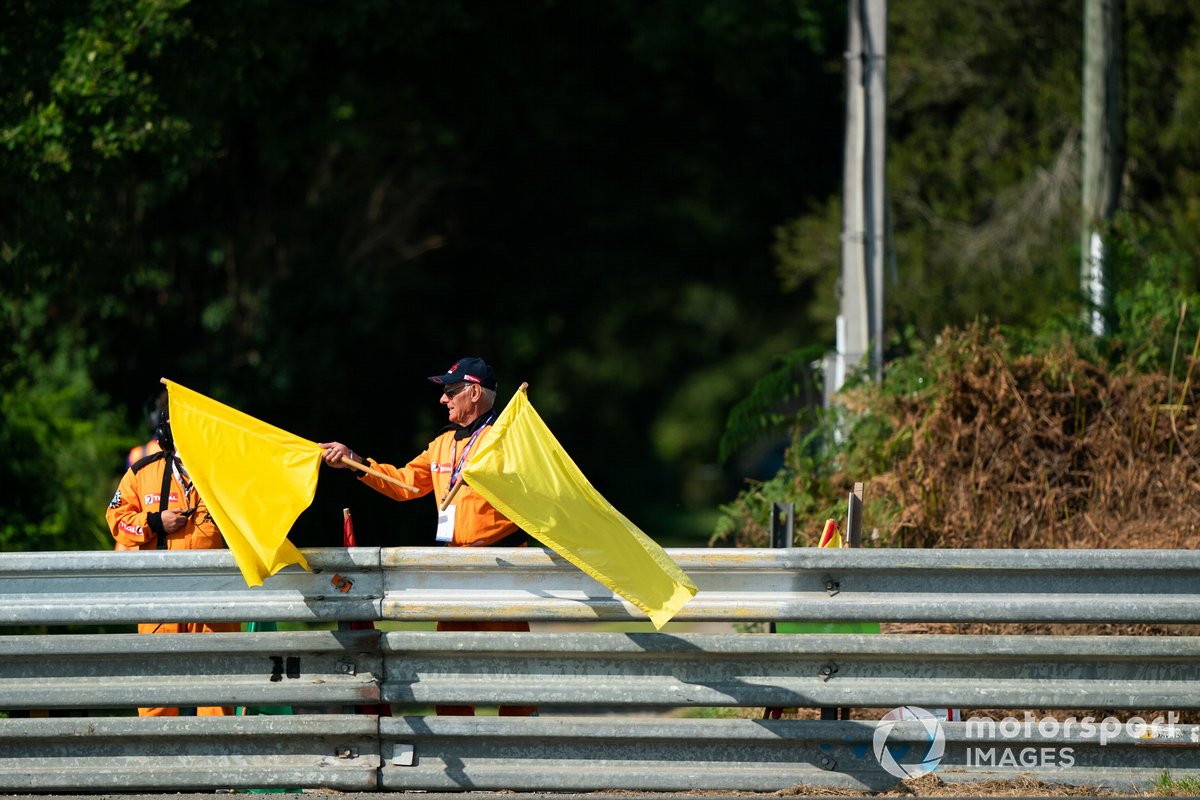 This is the flag used most of all. It means ‘danger’ and is shown at the marshal post preceding a hazard and at all subsequent posts until there is no danger.

A single waved yellow is used when the hazard is beside or partly on the track and the driver must reduce speed, not overtake and be prepared to change direction.

A double yellow comes into play if the hazard is wholly or partly blocking the track and/or there are marshals working on or beside the track. In this case, a driver must reduce speed ‘significantly’, not overtake and be prepared to change direction or stop.

The yellows also come out during a safety car period, shown alongside a board saying ‘SC’ for safety car or ‘VSC’ or virtual safety car.

They are also used at the start of the race, when marshals stand on the pit wall at each grid spot. If a driver raises his hands to signal a problem, the yellow flag is waved to warn other drivers of the danger.

Despite being a clear warning sign, however, in the heat of battle a lot of drivers do not respect them at all! The penalty for doing so is down to the stewards but to make it more formal a system was introduced in 2021 to identify cars that pass waved double yellows and do not slow down as required. 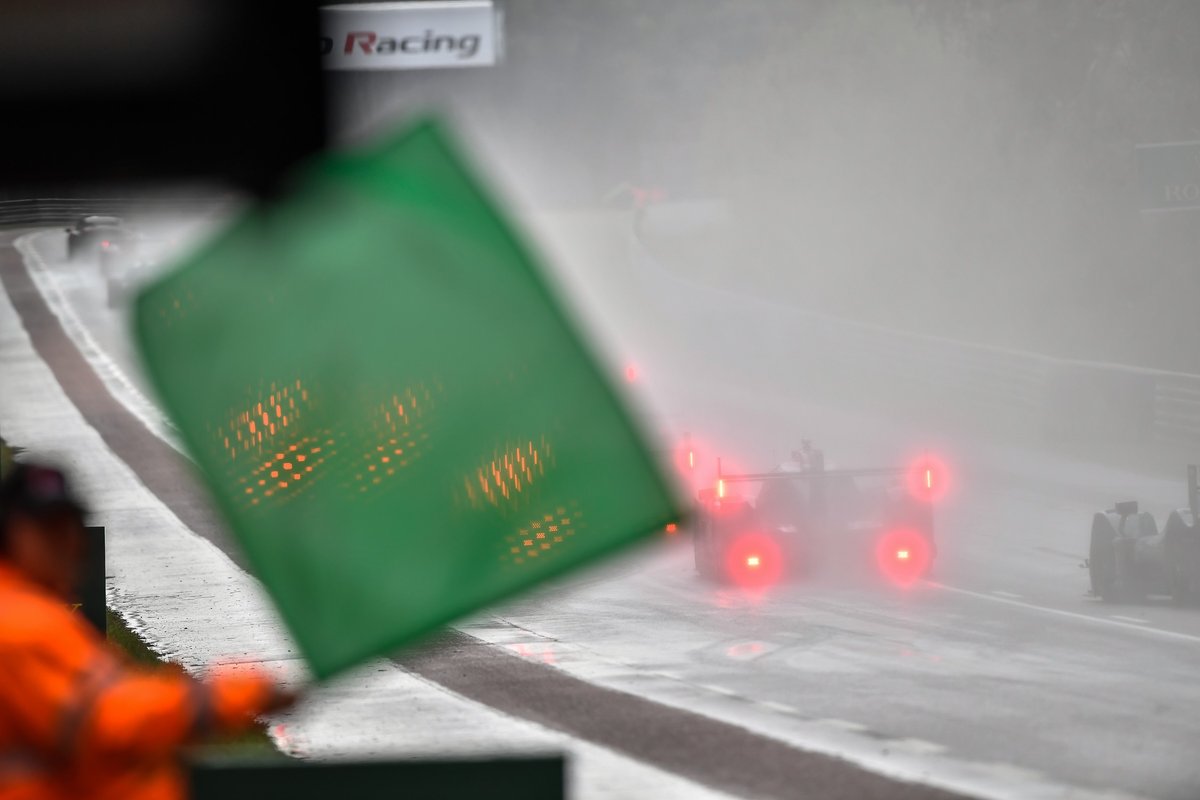 It is also used to start any practice or qualifying session, it’s waved at the back of the grid at the start of the race to confirm all the cars have lined up, and it’s waved at start line to get the race going in the case of a rolling start or the end of a safety car period.

This, as the colour suggests, is used to stop the race. It’s used if the circuit is blocked or conditions make it too dangerous to continue. When that happens, red flags are waved at all marshal posts and the abort lights are lit up on the gantry across the start-finish line.

F1’s first red flag was waved in its first ever season in 1950, when rain stopped play at the Indianapolis 500, which at the time was part of the championship. It was 21 years until the next one, when mist fell over Mosport Park in Canada,. There have been a total of 78 to date.

The 2021 season has, so far, seen an astonishing FIVE red flags – the most in ANY year since the championship began. They came in the Emilia Romagna, Azerbaijan, British, Hungarian and Belgian Grands Prix, the latter after just one lap under the safety car in heavy rain, making it F1’s shortest ever race.

This one shows drivers that the track is slippery – usually because of oil or a specific patch of water. 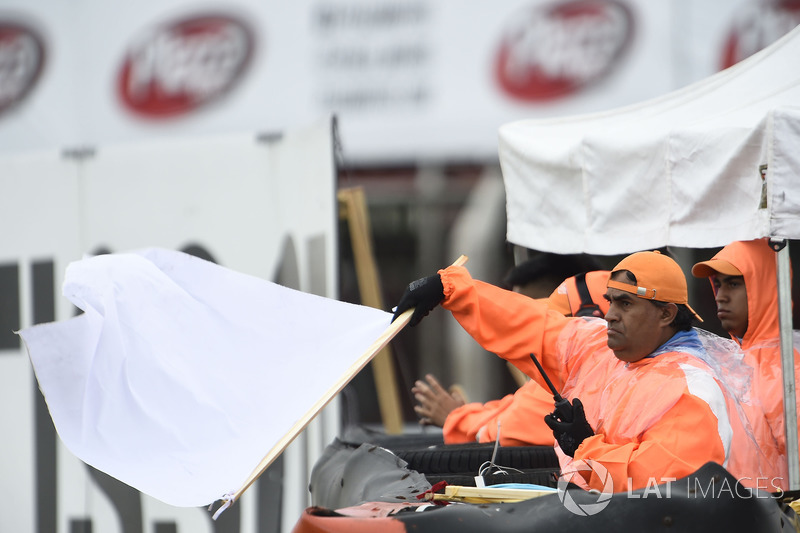 This one is very important, because it means there is a slow moving vehicle out on track. That could be a tow truck, ambulance or even an F1 car doing a start simulation at the end of practice.

One of the most bizarre times it came out was in 2013, when the FIA released a fire truck out onto the track to deal with an incident before the safety car had slowed the field. Fortunately, leader Sebastian Vettel slowed down after spotting the white flags and also seeing a safety car board.

In some series, it is used to signify the last lap of the race – but F1 does not use it for that.

This is another regularly used flag, but it’s not very popular. It’s waved at slower cars to let them know a faster one is trying to overtake. It also comes out at the pit exit to warn drivers of oncoming cars on the racetrack as they leave.

If a driver is being lapped and fails to respond to three blue flags, they get a penalty. That happened to Haas driver Nikita Mazepin in Portugal in 2021 and also to Sergio Perez and Daniil Kvyat in Spain the year before, as F1 tried to crack down on drivers ignoring them.

This is a bad flag to get, because it means you’ve got a problem. It’s waved to tell drivers there’s an issue with their car that could cause a danger to others – and if they see it, they must head straight to the pits and either fix it or retire.

This flag is personal. It’s F1’s equivalent of football’s yellow card and it’s waved along with a sign showing the offending driver’s number, to warn them of ‘unsportsmanlike behaviour.’ It’s sometimes been described as the “meatball” flag!

It was shown to Hamilton at the Malaysian Grand Prix in 2010 for weaving in front of Vitaly Petrov’s Renault, but after that it was replaced with a radio warning until making a return in 2019, when it was shown to Pierre Gasly in Belgium for moving in the braking area.

It was also shown to Max Verstappen at the Sao Paulo Grand Prix in 2021 for aggressively defending his lead a second time during an intense battle with Lewis Hamilton. His response via team radio: “Yeah, perfect. Say hi!” 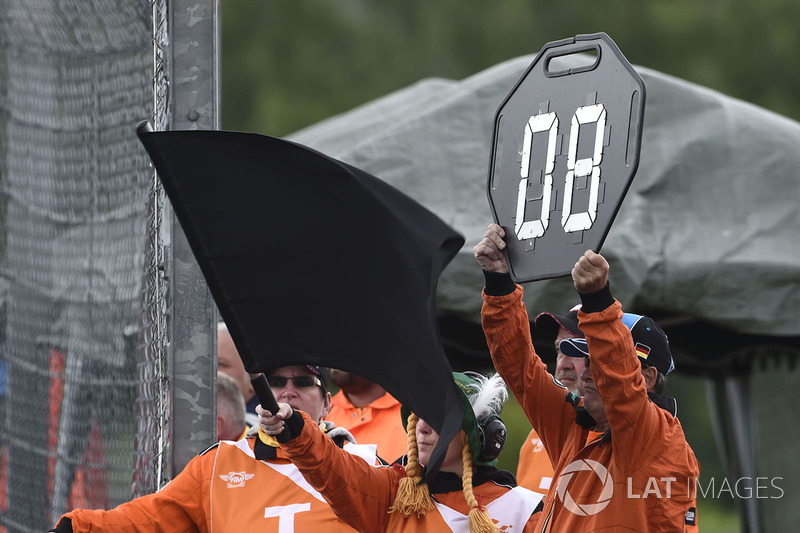 This is the equivalent of football’s red card – an immediate sending off, with no recourse. Like the black and white diagonal, it’s waved along with the driver’s number and they must come straight into the pits and get out of the race.

You don’t see it much any more – in fact, the last time it was waved in a race was during the chaotic Canadian Grand Prix in 2007, when Felipe Massa’s Ferrari and Giancarlo Fisichella’s Renault were both pulled in for passing a red light going out of the pits.

Three years before that, in the US Grand Prix, Juan Pablo Montoya saw black after his Williams had broken down on the grid and he literally jumped out of the car just before the rest of the field left on the formation lap. He ran to his garage to get into the spare, started from the pits, but was flagged later in the race.

Ayrton Senna experienced a similar incident at his home race in Brazil in 1988, when his McLaren failed on the grid. He switched to the spare, started from the pits and sent the crowds wild by climbing up to second by the halfway point, only to be given the flag soon after.

There have been many other incidents and several repeat offenders – Elio de Angelis and Nigel Mansell both got three black flags in their career, the latter most notably for reversing in the pits in Portugal in 1989, after which he ignored the flags and stayed out until colliding with Senna, putting both out the race.

Michael Schumacher ended up on the podium despite continually ignoring black flags during the British Grand Prix in 1994. He broke the rules by overtaking pole sitter Damon Hill twice on the formation lap and although he returned to his second placed grid slot he was given a stop-go penalty.

He stayed out as the team argued their case and was shown the black flag several times but kept going to the end, finishing second, receiving the trophy and spraying the champagne. Two weeks later, he was disqualified, banned for two races and the team got a $500,000 fine.

One of the most bizarre black flag appearances came in 2019 when Haas actually asked the stewards to show them to their own cars during a practice session at Monaco. They had lost all car-to-pit communications and the drivers were ignoring the pit boards telling them to come back in!