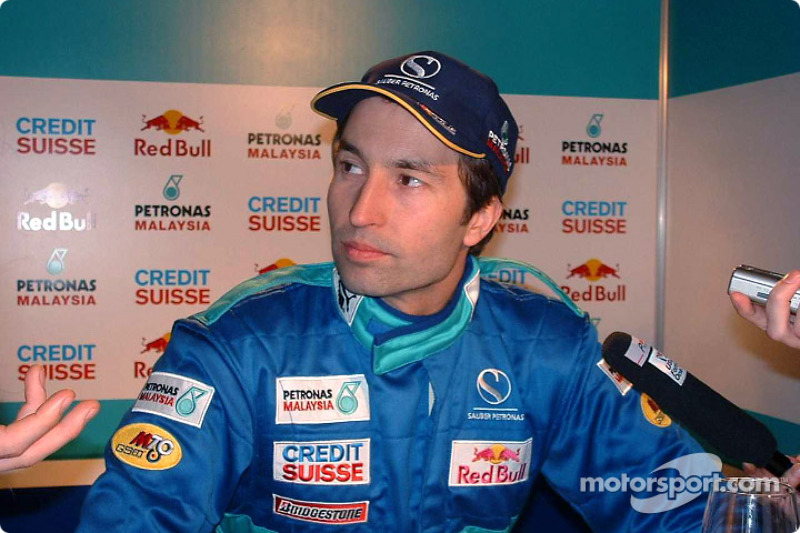 Q: The Grand Prix of Europe will be your 150th GP. Do you have any special feelings about that?

Heinz-Harald Frentzen: "To be very honest: not really. Normally I don't care about statistics! Whether it's my 36th birthday, or 150 Grands Prix. However, what makes it special in this particular case is the fact that it will take place in front of my fans in Germany." 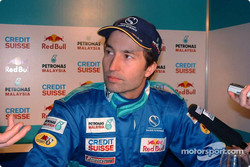 Heinz-Harald Frentzen.
Photo by Nikki Reynolds.
Q: You have now been in Formula One for 10 years. What major changes have you seen over this period?

HHF: "I have to say that there are very steady, consistent developments in all areas. They allow us to be in a position where we can break the lap records despite of the FIA slowing down the cars every year."

Q: You are 36 and one of the older drivers in Formula One. Does that ever prompt you to think about retirement?

HHF: "No, it doesn't. At the moment I see myself as a benchmark for young drivers entering Formula One, and I only think I am as old as I feel. In contrast to other high-performance sports there are no typical signs of wear in motor sports. From the psychological point of view being 36 doesn't bother me at all."

Q: What still fascinates you about Formula One?

HHF: "It's the combination of sport and the technology, together with the driving. The driving is something special because in Formula One everybody has to perform at their best. To push the car to its limit, that's a challenge."

Q: Which is your best memory over these 10 years?

HHF: "There are a lot of good memories. For example my Formula One entry and my racing success. And these memories are worth continuing the racing."

Q: And what was your biggest disappointment?

HHF: "I have to say the 1997 season. That was the only season when I had a car with which I could have been able to become World Champion. But unfortunately the season didn't go well for me."

Q: After the death of Ayrton Senna you had an offer from Williams. But at that time you preferred to stay with Sauber. Did you not miss a great chance?

HHF: "The offer came in a very difficult time. There had been the Senna and Ratzenberger accidents, and it was a very sad situation. And then Karl Wendlinger crashed at Monaco. When the offer from Frank came I was on the one hand proud and happy, but on the other hand there was Peter Sauber who had given me the chance to enter Formula One. That's why I left it up to him to make a decision whether I should stay or go. And the best thing is that I don't regret this decision at all."

Q: You are the parent of a daughter and your wife Tanja is expecting your second child. Has being a parent made you more conscious of the dangers of this kind of sport?

HHF: "No. Not yet. Maybe one day it will. But for me it has been a great thing becoming a father. Of course, it has changed me. Having a child gives you a different perspective on life, but not when I am doing my job and going flat out into a high-speed corner. There is no change in that since Lea was born. Of course, I do think of being a good father, of keeping my family safe. Not only motor racing is dangerous."

Q: Lea is three years old. Does she realise what her father does for a living?

"I don't know, but she recognises me on television. I don't know if she realises that it is unusual that she can see me there, and what I do."

Q: What do money and luxury mean to you?

HHF: "They are a side effect for successful racing drivers. I don't think that any of the Formula One racing drivers goes racing for money. When I was young I continued because I had a lot of fun. Earning money was not an issue. On the contrary! When you start driving karts you rather doubt that you could ever earn money in this sport."

Q: Which unfulfilled dreams do you still have in your life?

HHF: "There are still some dreams left to dream, of course. I would like to enjoy some more nice moments with Sauber. I also would like to do a boat trip around the world, just doing the things you can't do when you are racing, for at least a year."