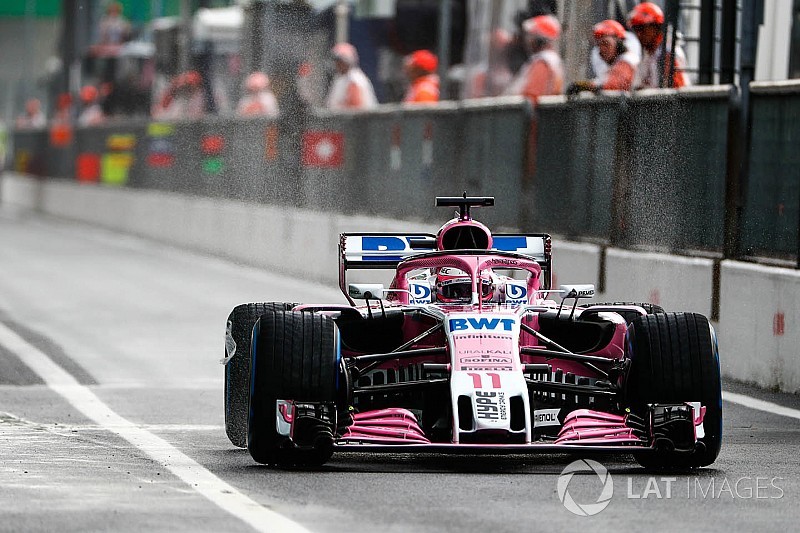 Sergio Perez set the pace in opening practice for the Italian Grand Prix as heavy rain early on Friday led to a jumbled order in FP1 at Monza.

Racing Point Force India driver Perez ousted Ferrari's Kimi Raikkonen from top spot on his final lap of the session, with Esteban Ocon third for the team that was effectively reincarnated last weekend in Belgium.

The late improvements stopped Brendon Hartley, Toro Rosso and Honda from being surprise pacesetters in FP1, which started in very wet conditions and did not quite dry enough for slick tyres at the end.

Despite heavy rain in the morning and the cancellation of the GP3 practice session, the 90-minute session began on time.

Daniel Ricciardo and Nico Hulkenberg parked their cars at the end of the pitlane several minutes before the start, and were the first to hit the soaking track.

The first 15 minutes or so featured sporadic running on full-wet tyres, before some started to sample intermediate rubber.

Times tumbled as the conditions improved, with Hulkenberg, Sebastian Vettel, Carlos Sainz and Lewis Hamilton hitting the top of the pile before the halfway part of the session.

Bottas usurped Hamilton almost exactly at the 45-minute mark, then Verstappen hit the front for the first time.

The Dutchman should have gone quickest earlier in the session but spun exiting the Parabolica on a flying lap.

His 1m35.665s on a drying track kept him fastest until just before the end of the session.

Ricciardo then split the Toro Rossos with a 1m35.207s, before Raikkonen, Ocon and Perez demoted Hartley with even later improvements.

Raikkonen set two personal bests in a row but his 1m34.550s was beaten by Perez on the Mexican's final lap of the session.

Ocon also improved on his last effort to lap within half a tenth of Raikkonen in third.

The Red Bull-backed quartet of Hartley, Ricciardo, Gasly and Verstappen were next up, with Sainz, Hulkenberg and Valtteri Bottas completing the top 10.

Championship contenders Hamilton and Vettel were 11th and 17th respectively after only completing 10 laps between them.

The slippery conditions caught out several drivers, but most only suffered a time-consuming trip through the run-off, or gravel in Ricciardo's case when he ran wide exiting the second Lesmo.

Raikkonen was a regular visitor to the escape road at the Roggia chicane.

The Finn locked up and slid wide several times at the corner that kicks off the middle sector but settled down when the track dried.

Hulkenberg to join Ricciardo at back of Monza grid