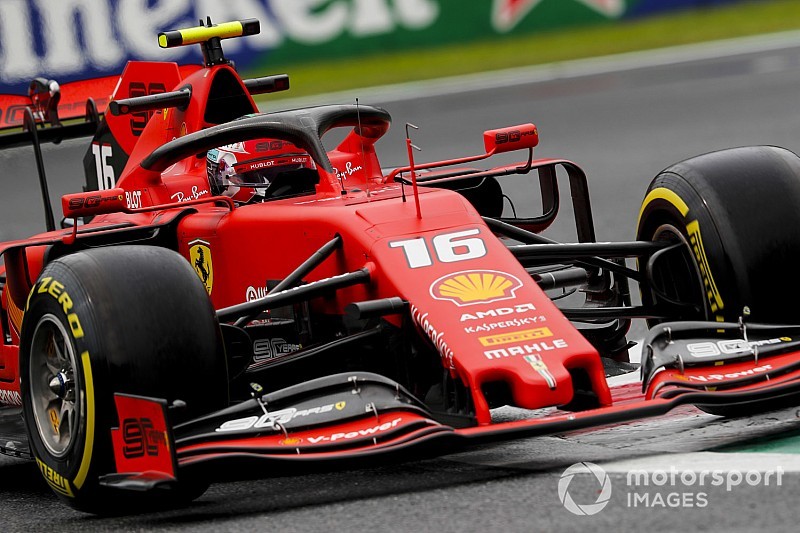 The session started on a largely dry track with some slight damp patches, meaning for the first 25 minutes drivers were able to lap on slick rubber.

Given the morning rain that compromised FP1, this led to a busy period of running with Lewis Hamilton setting the pace early on with a best lap of 1m21.972s using medium compound Pirellis.

Sebastian Vettel, also using mediums, was 0.303s slower with Leclerc using hards and down in fourth, 0.475s down and behind Red Bull's Max Verstappen.

Rain was expected, eventually arriving 25 minutes into the session, meaning most of the field quickly switched to softs for qualifying simulation laps before the conditions worsened.

Once on slicks, Leclerc hit the front with a lap of 1m20.978s, set just 19 minutes into the session.

Teammate Vettel then put in his lap to slot into second place, two tenths of a second off his teammate despite having set a faster time in the first sector of the lap.

While the Mercedes duo initially looked to have missed this dry window to set a time, both Hamilton on Bottas did go out later using softs once the track had dried out and set improved times with 30 minutes remaining once the rain had cleared.

Hamilton did enough to climb to second place with his attempt, setting a pace just 0.068s off Leclerc to split the Ferraris.

Bottas was 0.369s off the pace in fourth after lapping slower than Hamilton in all three sectors.

Red Bulls were fifth and sixth with Verstappen, who carries a back-of-the-grid start penalty thanks to taking the spec-four Honda engine, ahead and 0.372s off the pace despite the team reckoning he was losing a second on the straights.

However, he also lost time on his quickest lap in the first sector then had to abort his second attempt thanks to the rain coming.

Alex Albon, who served his grid penalty last weekend so already has the latest engine available, was 0.239s slower in sixth place.

Toro Rosso driver Pierre Gasly had time to set two quick laps on softs before the rain, improving to seventh with his second attempt and pipping Romain Grosjean by 0.029s.

Nico Hulkenberg just missed out on the top 10 in the second Renault, ending up 0.144s quicker than the McLaren of Carlos Sainz, who set his best time on mediums.

Haas driver Kevin Magnussen, who clipped a piece of pit equipment as he left for one of his runs, was 13th fastest and 0.012s quicker than Alfa Romeo's Kimi Raikkonen, who had an off at the first chicane early in the session.

Lance Stroll was one of only four drivers to set an improved time after the rain, jumping to 15th ahead of Racing Point teammate Sergio Perez.

This also shuffled Alfa Romeo driver Antonio Giovinazzi down to 17th place, with Lando Norris missing much of the session to a small oil leak before setting his first lap time to take 18th late on, despite running wide at Parabolica.

Robert Kubica won the intra-Williams battle ahead of George Russell to take 19th place by just over half-a-second.

With most drivers setting their best times early on then returning to the pits, the session was red-flagged after 36 minutes to allow gravel to be cleared from the track at the second chicane.

The session was resumed after a stoppage of nine minutes some cars did soon return to the track led by Grosjean, with the Mercedes drivers also among those to complete exploratory laps on their used tyres before completing their performance runs on softs.

During the closing stages, drivers were able to conduct race simulation stints, with the rain largely holding off before returning in the final five minutes.