Ericsson's shunt happened just two minutes into the session at the start of his first flying lap, with his Sauber car snapping left when he hit the brakes on the high-speed approach to Turn 1 after the DRS failed to close.

This pitched Ericsson's car head on into the barriers, with the car then launched into a series of rolls while spinning down the track.

The car came to rest the right way up and Ericsson was able to get out of the car before being taken to the medical centre and then returning to the Sauber garage after being given the all-clear.

The accident triggered a lengthy red flag for the wreckage to be cleared up and the barrier to be repaired eventually resuming after a 20-minute delay. 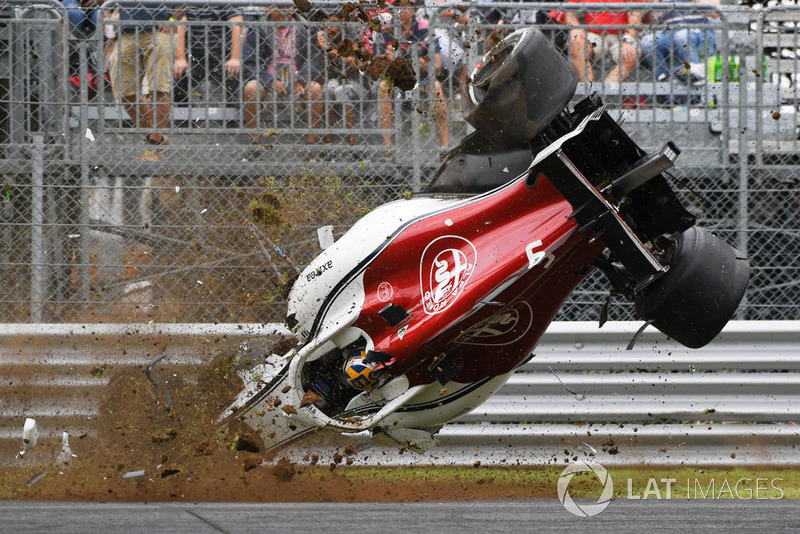 With the session effectively reduced to 68 minutes, Ferrari soon took control up front with Sebastian Vettel setting a time of 1m21.716s on supersofts to head soft-shod teammate Kimi Raikkonen by 0.157s.

Lewis Hamilton was two tenths off the pace at this stage on softs despite an off track-moment when he cut the second chicane.

When drivers switched onto their qualifying simulations, all were able to complete multiple laps on supersofts.

While Vettel was forced to abandon his first lap after running wide at the Parabolica, teammate Raikkonen hit the front with a lap of 1m21.375s.

Vettel then improved on his third push lap to go second, then on his fourth attempt he posted a 1m21.105s to seal top spot – 0.270s faster than Raikkonen.

But his attempt to squeeze one more fast lap out came to nothing when the rear stepped out on entry to the Parabolica, sending him spinning through the gravel.

Vettel kept the car out of the barrier and was able to drive back to the pits – returning to the track with 12 minutes remaining.

Hamilton was third fastest, just 0.017s behind Raikkonen, with Bottas a further four tenths back.

Red Bull pairing Max Verstappen and Daniel Ricciardo were fifth and sixth, once again not in touch with the Ferrari and Mercedes drivers.

The Racing Point Force Indias of Esteban Ocon and Sergio Perez were best of the rest, with the former lapping 1.825s off the pace and just 0.012s quicker than his teammate.

Charles Leclerc claimed ninth place with his late qualifying simulation run after his session was delayed by similar DRS problems to those suffered by Ericsson.

Leclerc went out twice after the restart to conduct DRS tests but returned to the pits after the rear wing did not shut, but the system did work successfully in the closing stages of the session.

McLaren had another difficult session, with Fernando Alonso and Stoffel Vandoorne slowest of those to set a time, the Spaniard lapping 2.636s off the pace.