Ferrari’s Sebastian Vettel set the pace in final practice for the Italian Grand Prix, but Formula 1 title rival Lewis Hamilton was less than a tenth slower ahead of qualifying. 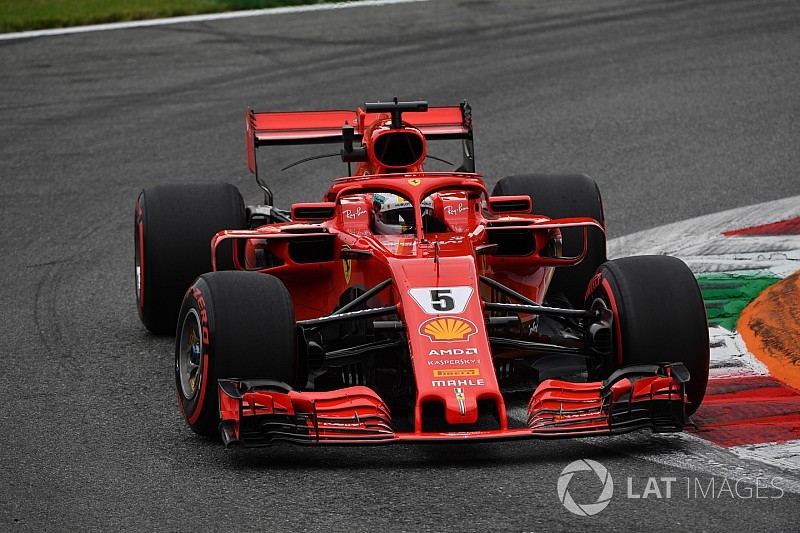 Hamilton had the edge in the early part of the session before Vettel and his teammate Kimi Raikkonen improved, but the Mercedes driver was able to split the Ferraris on his final runs.

The top three was covered by just 0.173s around the Monza circuit going into this afternoon's qualifying session.

Early-morning rain was replaced by sunshine and the track was almost completely dry by the time FP3 started, although there were reports of minor damp spots under the trees in the middle of the circuit.

As laptimes improved, Raikkonen hit the front on a 1m21.399s as the frontrunners conducted their first qualifying simulations on supersoft tyres.

Hamilton then managed to sneak ahead of Raikkonen by 0.007s despite a slower middle sector.

Vettel failed to challenge after flat-spotting his front-left tyre with a big lock-up into the first chicane, but hit the front when the second and final batch of runs on fresh supersofts took place in the final 20 minutes.

Raikkonen made it a Ferrari one-two as he posted the fastest final sector to lap 0.173s slower in response.

Hamilton then split the Ferraris with a 1m20.590s to wind up just 0.081s than Vettel, who the Briton leads in the championship by 17 points.

Valtteri Bottas was adrift of the lead trio in the second Mercedes, lapping six tenths off the pace and closer to the Red Bull of Max Verstappen in fifth.

Charles Leclerc finished the session ninth in a Sauber that has a fixed rear wing following its DRS dramas on Friday, with Romain Grosjean completing the top 10 in the second Haas despite hitting traffic on his final runs.

Leclerc's teammate Marcus Ericsson was a busy man as he bid to make up for the track time he lost thanks to his massive DRS-induced shunt in second practice.

Ericsson completed 25 laps, more than anyone else, on his way to the 16th fastest time, but did not suffer any further problems thanks to Sauber's fix.

However, the session did include a DRS drama as Nico Hulkenberg returned to his Renault garage with the DRS still activated on his car.

That proved the end of his session as the team investigated the cause.

FIA working on better-looking halo for 2021