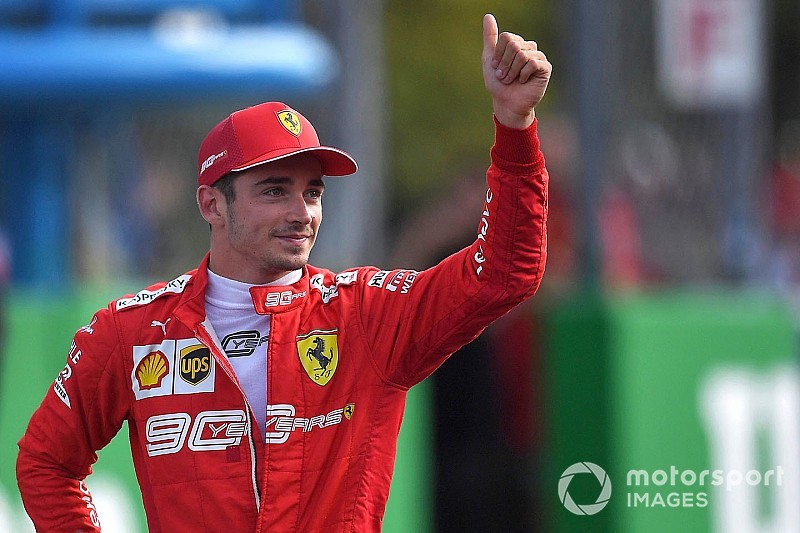 Leclerc put his Ferrari on pole position with a lap of 1m20.126s on his first run in Q3, giving him an advantage of 0.039s over Mercedes driver Lewis Hamilton.

But with the tow crucial at Monza, ahead of the second runs the 10 Q3 drivers engaged in a 'slow race' for the ideal position to start their flying laps, with most failing to make to the end of the lap before the chequered flag.

This meant no driver was able to improve their time on the second run, with Hamilton complaining that the Ferrari drivers had held everyone up and "just timed everyone out".

The stewards are investigating "the last lap of qualifying", with drivers having previously been warned about slow out-laps.

Valtteri Bottas, who just completed his first lap before the red flags flew in Q3 for Kimi Raikkonen spinning into the wall at Parabolica, was third fastest, just 0.004s slower than his teammate.

Sebastian Vettel was fourth fastest in the second Ferrari, a tenth off Bottas and ahead of the Renault of Daniel Ricciardo.

Nico Hulkenberg was sixth fastest ahead of Carlos Sainz, who was the slowest of the seven drivers to set a time in Q3.

Alex Albon, Lance Stroll and Raikkonen were classified eighth, ninth and 10th respectively with none of them having posted a time.

While Raikkonen's was thanks to his first-run crash, the other two were unable to complete a lap thanks to the late-session shenanigans.

Antonio Giovinazzi showed how big a difference a tiny gap can make and ended up as the fastest of the five drivers eliminated in Q2 despite lapping just two thousandths slower than teammate Kimi Raikkonen.

The Italian jumped Haas driver Kevin Magnussen with his final lap, with the Dane ending up a tenth slower in 12th place after failing to improve on his first Q2 run time.

Toro Rosso's Daniil Kvyat was 13th fastest, with the rear stepping out at the exit of the second chicane on his final attempt and leading to him taking a bite of the gravel.

That lap was his fastest and was enough to put him ahead of two drivers who didn't mount serious Q2 attempts thanks to having back-of-the-grid penalties for power unit changes – McLaren's Lando Norris and Toro Rosso's Pierre Gasly.

Romain Grosjean was quickest of those eliminated in the first segment of qualifying in 16th place despite lapping just 0.658s off Q1 pacesetter Leclerc.

The Haas driver was in trouble after the first runs in Q1, which were separated by a four-minute red flag caused by Sergio Perez's Racing Point stopping on track, but did improve on the second attempt.

This temporarily put him into the top 15, but improvements by Sainz and Stroll meant he missed out on advancing after lapping 0.061s slower than Kvyat.

Perez, who ground to a halt at Curva Grande after suffering a loss of power at the end of his first run, ended up 17th.

The red flag didn't cause much disruption as it fell between the first and second runs of the drivers, although Vettel was on a lap that was set to improve on mediums that he had to abandon and subsequent did go out on softs as a precautionary measure and did not set a time.

That put them 18th and 19th, with Red Bull driver Max Verstappen not setting a time after reporting a lack of power on his run.

Verstappen was always set to start at the rear thanks to being one of three drivers with a back-of-the-grid penalty, along with Gasly and Norris.

Inside story: What it’s really like to be an F1 mechanic