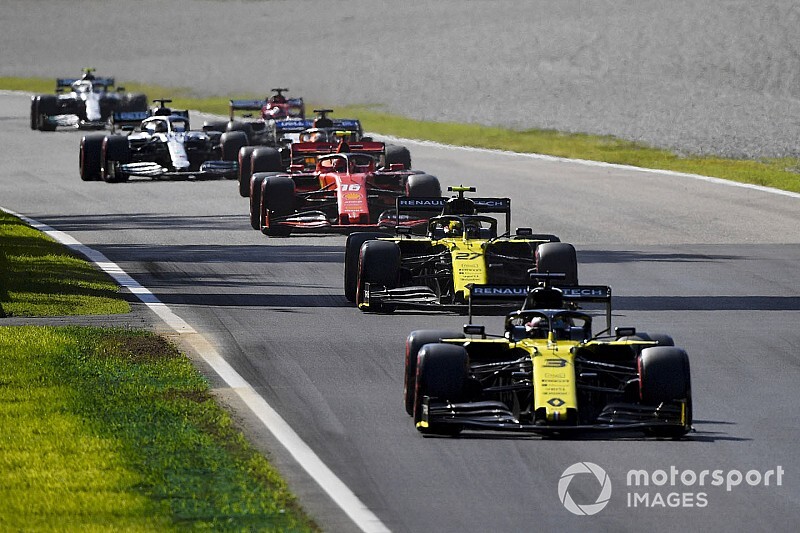 Formula 1's top qualifiers are under investigation for bizarre tactics in the final runs of Q3 as qualifying for the Italian Grand Prix descended in to a farce.

With drivers eager to get a slipstream for the final run of qualifying, the leaders all jostled for position in a train of cars as they went through the first chicane.

Nico Hulkenberg went across the run-off area at the first chicane, and the following car of Lance Stroll then backed off to ensure he did not overtake the Renault. Behind him everyone else backed off to try to not move to the front of the train.

As the drivers all tried to hold back, in the end they got their timing wrong as the time counted down – meaning only Carlos Sainz as the car that had moved to the front and the following car of Charles Leclerc made it across the line before time ran out.

After the session that FIA - which had warned drivers about the possibility of penalties for qualifying tactics - announced that the last lap was under investigation.

Pole position man Leclerc said: “I am happy with the pole but a shame at the end there was a big mess.”

Stroll described it as a 'comedy show', while Lewis Hamilton, who ended up on the front row, echoed his comments from Spa last weekend when he suggested drivers slowing down to get a tow was not safe.

“It is crazy with the system we have,” Hamilton said. “With everyone backing up and trying to get a position, they timed us out. It is interesting – get pole position in the first run and time us out.

“On the out lap it is dangerous for all of us – with people slowing down and you don’t know who is alongside you. It is a risky business out there.”

On Friday, the F3 qualifying session was red-flagged for drivers messing around with slipstreams, with 17 of the 30 drivers penalised for their behaviour.