Formula 1 heads to the 'Temple of Speed' at Monza this weekend for an Italian Grand Prix where fast laps and low downforce will be key talking points.

With a track length of 5.793 metres, and a race that takes place over 53 laps, Monza is a circuit that has the highest average speed – 244km/h, and the lowest rate of direction change – just 167 degrees per kilometre.

The track is characterised with four high speed straights, a slow chicane (Variante della Roggia), two quick corners (Parabolica and Curva Grande), and two chicanes ideal for overtaking (Variante del Rettifilo and Variante Ascari) thanks to DRS zone on the straights preceding them.

Monza requires a very low level of downforce, but one that is efficient enough to provide loads at low/medium speed – for better braking. Further it needs a good mechanical configuration of suspension to work well over the kerbs, while also needing strong power and a reliable hybrid system because it is full throttle for 69 percent of the lap. 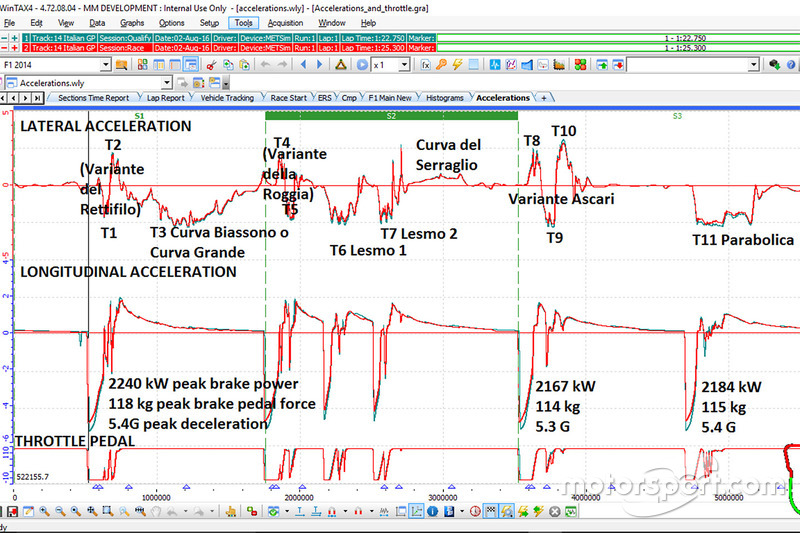 Tyres: Less than one second difference

According to Magneti Marelli's simulations, the differences between the supersoft, soft and medium compounds that Pirelli brings will not be as great as they were in Belgium last weekend.

The Monza circuit is very demanding on brakes, with a high demand for the corners allied to the difficultly of maintaining temperature of the discs on the long high-speed straights.

One of the key things teams have to work out also is how best to split the balance between front and rear with the modern Brake-by-Wire systems.

Last year's pole position was obtained by Lewis Hamilton for Mercedes with a 1m23.397 seconds. The prediction of Magneti Marelli's WinTAX system is that it will be beaten this year by at least one second. 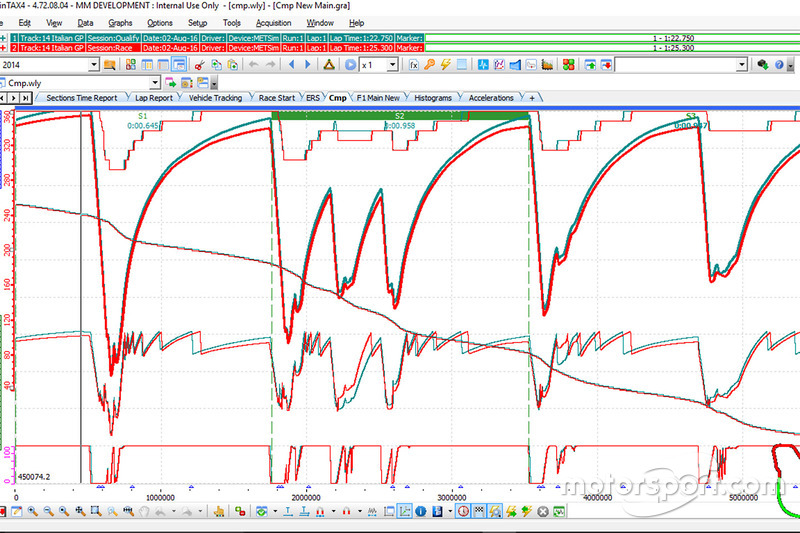 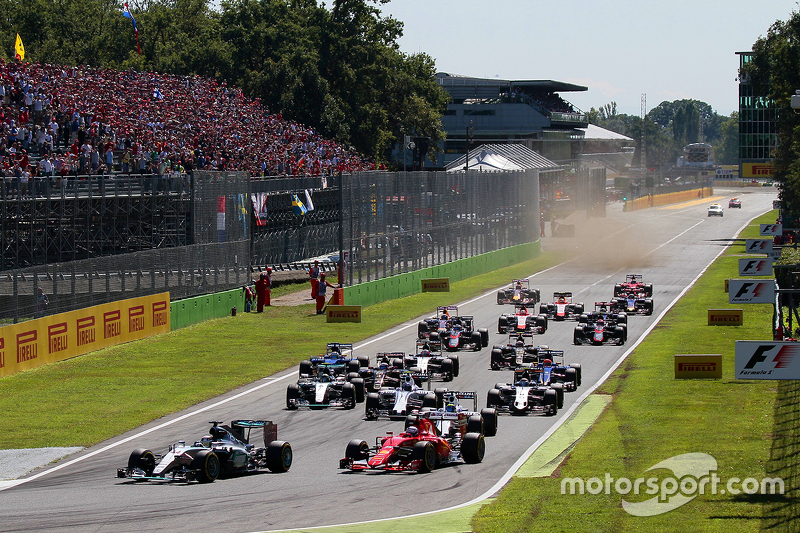 The first corner is 620 meters from pole position. The asphalt of Monza is not particularly abrasive, so it requires good management of the clutch to prevent wheelspin – and to allow additional exploitation of the ERS.

In the race, on the main straight in eighth gear, F1 cars will reach speeds of around 355 km/h in normal conditions – and they could get as high as 364 km/h using the DRS.

With braking being quite challenging due to the low downforce, it requires an effort of 2240 kW – around 188kg – on the brake pedal. The car decelerates to 80 km/h in 3.3 seconds – dropping through the gears to first and recharging the battery with 264 kJ.

The Prima Variante, a tight right-left corner, requires good mechanical setup to improve traction – while drivers must make heavy use of the kerbs to find speed for the section of track that follows.

Cars exit the first chicane at 90 km/h in second gear and continue toward the Curve Grande that leads in to the woods. They will hit 314 km/h in eighth gear with a lateral acceleration of around 2G – which will be a big challenge for the engine oil reservoirs in qualifying and towards the end of the race.

Formula 1 cars arrive at the second chicane, the Variante della Roggia, at a speed of 340 km/h in eighth gear. For this left-right corner, braking requires a force of 1909kW – with a force on the brake pedal of 101kg. The battery will get charged with 180 kJ.

The car will decelerate to 101 km/h in third with a braking distance of 110 metres, and then will exit the chicane at 130 km/h in third to climb up three gears towards the Lesmo Curves.

The Lesmos are two medium-speed right handers where drivers have to let the car slide. In Lesmo 1 you reach 265 km/h in sixth: with a slight brake of 1317 kW that recharges the battery with 92 kJ and slows the car to an exit speed of 178 km/h in fifth.

After a short straight, cars arrive at Lesmo 2 at 262 km/h in sixth gear, with just a brief braking of 1360 kW from an effort of 74kg on the brake pedal which recharges the battery by another 90 kJ.

There is a slower exit on this corner, as the cars drop to 166 km/h in fourth gear as they drift out towards the exit kerb, to hit a part of the track when they can use DRS for overtaking.

With a slight kink to the left as the track ducks under a bridge below the old track, the car will reach 307 km/h in seventh gear before arriving at the Variante Ascari at 342 km/h – but they could be in eighth gear at 351 km/h if they have used DRS and more energy recovery. 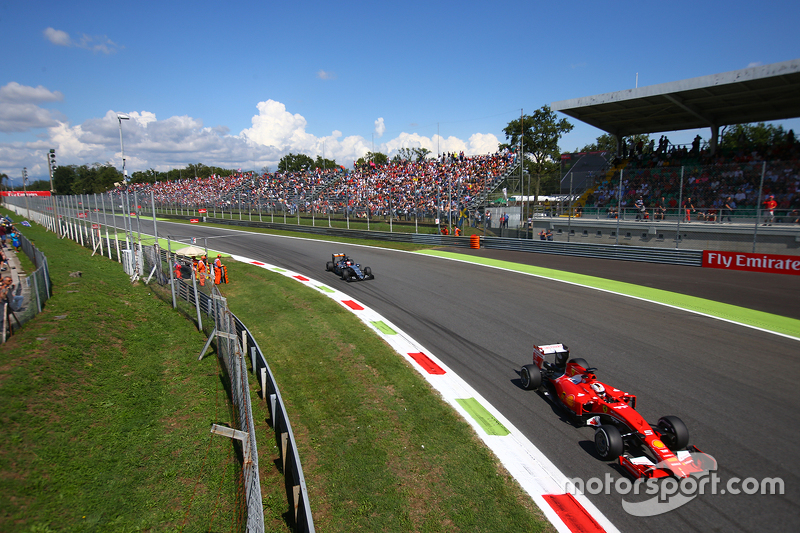 The Variante Ascari is a crucial part of the track for overtaking. It consists of three curves – left, right then left again - in spectacular sequence

Braking for Ascari requires a power of 2,167 kW with an effort of 114 kg on the brake pedal, charging the battery with 170 kJ.

Dropping down to fourth gear to a speed of 156 km/h, drivers will experience a deceleration of 5.3G for the first left hander.

They will then pick up the speed again to reach 190 km/h in fifth for Turn 9, before exiting the left hander Turn 10 at 234 km/h in sixth. Getting the highest possible speed on the exit is essential.

From here, cars will reach 341 km/h in eighth gear (although expect 348 km/h in qualifying with supersoft rubber) before the Parabolica – where they will brake from 2184 kW to recharge the battery with 120 kJ to slow the car to 176 km/h in fifth. The peak G-force here is 5.4G.

From here, the drivers try to maintain as smooth a line as possible to maximise their speed on to the start-finish straight.

The Monza circuit requires a low downforce setting that must be efficient at medium speed to ensure a good balance while braking.

The DRS is not very effective in Monza (may be worth about 6 km/h gain in speed compared to the 18 km/h that are seen at Spa), since cars will have only a very small main flap – but it can be more useful for overtaking where the benefit could be 16 km/h of top speed.

The track of Monza is especially hard on brake cooling: you must find the right adjustment to avoid excessive temperature drop of the discs while on the straights. The contrast between the straights and the violent braking for the chicanes is one of the more extreme of the year.

The Monza circuit is one of the three least difficult for teams in terms of gear changes – behind Silverstone and Spa. There are 1961 gear changes in the race. The analysis from WinTAX shows that eighth gear can get particularly stressed as it is used more than 30 percent of the lap, while sixth gear is used for approximately 20 percent of the lap. 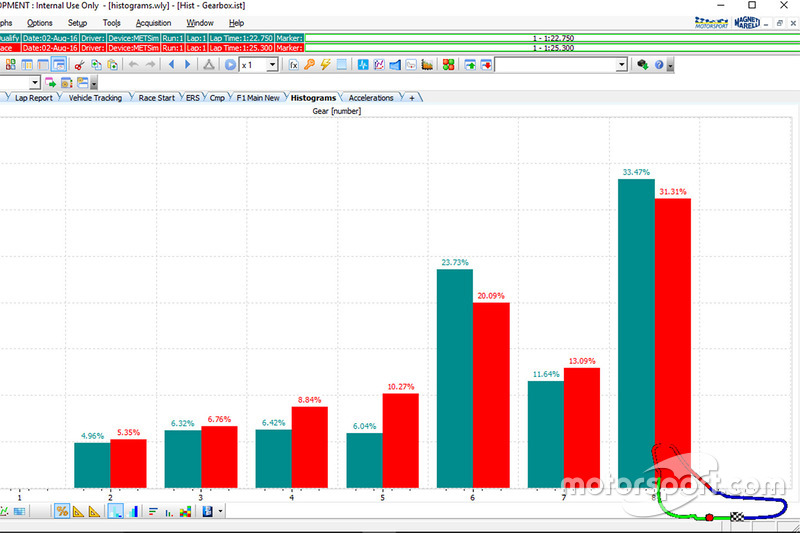 Monza is very tough on the power unit – and is up there with Spa and Bahrain in terms of being most challenging. The engine is used at full power for 69% of the lap, since there are four long runs at full power. The circuit is quite sensitive to power: and teams will need the maximum energy recovery possible so they are not left without the extra power at key sections. Good acceleration is also a must from the chicanes. 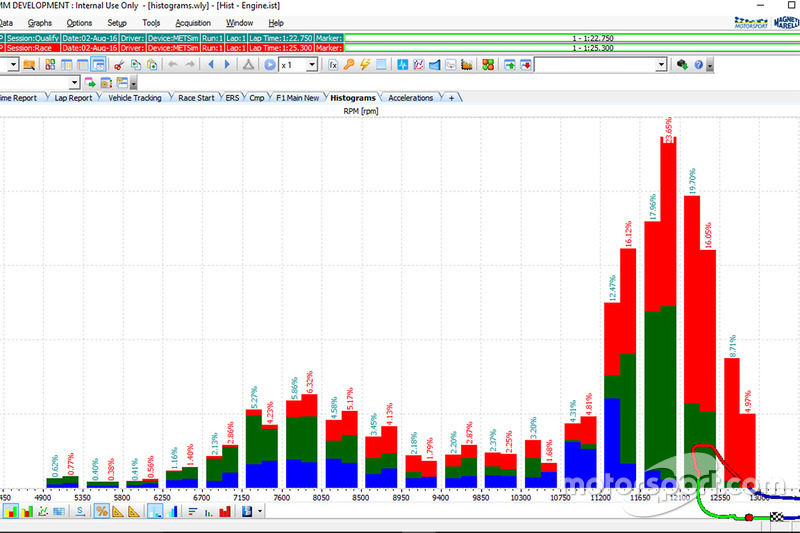 Fuel consumption at this track is not critical because 88 kg of fuel is sufficient to complete the race distance. The value is relatively low: but it is not too surprising considering that the low downforce settings means that drag is reduced. The smaller wings save more than 10 percent of fuel compared to a higher downforce configuration.

Monza does not allow a large energy recovery on the brakes with the MGU-K because cars are braking only for 11.3 seconds per lap. But there is a greater chance to recover energy from exhaust gases due to the high mileage at full throttle.

On this track it is possible to recover braking with 735 kJ through the MGU-K and 3203 kJ in acceleration with the MGU-H - for a total of 3938 kJ per lap. The value is second only to Baku where teams could recover 4954 kJ per lap.

A performance contribution of 57 percent from the ERS at full strength corresponds to 2.8 seconds for every lap – and 19 km/h top speed.

Whiting to meet with Vettel, Raikkonen over Verstappen