Christian Klien was only ten years old when Ayrton Senna crashed into Tamburello on May 1, 1994 and the sport of Formula One lost one of its greatest ever drivers. Christian's current Jaguar Racing team-mates, Mark Webber and Bjorn Wirdheim were somewhat older at the time -- fourteen and seventeen years old respectively -- but they all recall exactly where they were and what they were doing on the fateful day nearly ten tears ago. 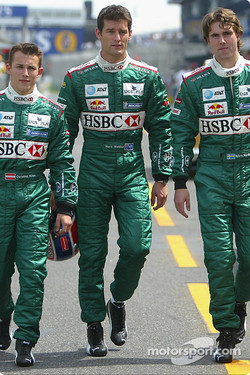 Q: Can you remember where you were and what you were doing when you heard about Ayrton Senna's death?

Mark Webber: "I can remember that I was at home in Queanbeyan watching the race late at night on television with my Dad. I went to bed after the race had finished - Michael Schumacher had won after Ayrton had been airlifted to hospital. Because of the time difference I didn't know Senna had died until I woke up the next morning and it was, of course, a very sad day for all of us."

Christian Klien: "I was ten years old at the time and was at my house watching with my father. I remember seeing a Williams crashed into the barrier at Tamburello and at the time I wasn't sure if it was Senna or his team-mate at the time, Damon Hill. When I realised it was Ayrton, it was a big shock as he was one driver you didn't expect such a thing to happen to. It was a very sad day."

Bjorn Wirdheim: "I remember I was watching the qualifying and that's when Ratzenberger had his crash and I wasn't actually in front of the television at the time, I was at the go kart circuit because we had a race at my local circuit and a friend of mine told me and I just couldn't believe it. I thought he was joking because of what happened the previous day and I was really worried because Ayrton was one of my favourite drivers and I remember me and my father rushed home to watch the race and we switched on Eurosport on television and the first picture I saw was of Ayrton in a helicopter and I was really relieved because I realised he was okay but it was the start of the memorial programme. So it was a long time ago and I was still very young but I can remember everything very clearly."

Q: What are your earliest memories of the Brazilian?

MW: "For me, it had to be of Ayrton driving his black JPS Lotus in 1985/1986. I would have been nine or ten years old at the time and his drive to win the 1985 Portuguese Grand Prix in the wet was a little bit special."

CK: "I remember meeting him at Hockenheim when I was a boy. He really was a big hero for me at the time so it really meant a lot. I watched all his races and really liked his aggressive driving style."

BW: "I guess ten years ago I was only 14 years old and I had only started watching Formula One a few years earlier but I do remember watching Ayrton in Japan when he took Alain Prost off and I remember some of the fights he had with Alain. Those were pretty special memories because you don't see much of that nowadays. The most impressive video footage I've seen is one of Ayrton's laps around Monaco and I've got it on my computer and it's really interesting to watch. I wish I was a little bit older at the time and I wish I was in Formula One then because those cars must have been fantastic to drive."

Q: Can you remember a particularly exciting race?

MW: "It would have to be Donington 1993 in the rain when he started seventh on the grid, overtook six cars including Schumacher, Hill and Prost and was leading by the end of the lap."

CK: "I was pretty young even towards the end of Ayrton's career but I do remember that amazing lap he drove at Donington Park in 1993. I must have been nine years old."

BW: "When it comes to the most memorable race I think I would have to say Donington in 1993 in the rain."

Q: What does the name and mystique of Ayrton Senna hold for you ten years on?

MW: "Ten years on, the name Ayrton Senna to me conjures up someone who was aggressive, fast and emotional. The way he went about his work and the results he achieved clearly means he's one of the greats and one of the biggest names in the history of F1."

CK: "As one of the greatest drivers ever and someone I was always excited to watch when I was young and starting out in my karting career. As I said before, he was, and is, one of my big heroes."

BW: "I think it's very difficult to compare drivers from different eras. You always read the magazines comparing Ayrton, Michael and other drivers and polls on websites but to me he was one of the best and a very interesting guy to watch and to read about because he was so special. When you read about him you pick up certain things that you think about when you're driving yourself and hopefully that can make me a better driver."

Q: How much has safety in Formula One improved since that day?

MW: "I think the sport's become much safer since that day and we're constantly working on the circuits to make them safer. People like Jackie Stewart have done great things for safety in Formula One over the years and it's a much safer game than it used to be, that's for sure."

BW: "The changes they made after the accident has kept a few other drivers alive in other crashes and it was so obvious what needed to be done after the crash and it's such a shame people didn't realise earlier. But that's the way it is and I guess it's natural when you have an accident and someone gets hurt you realise what the problem was and why he was hurt and then you improve the car. That's the way it works."