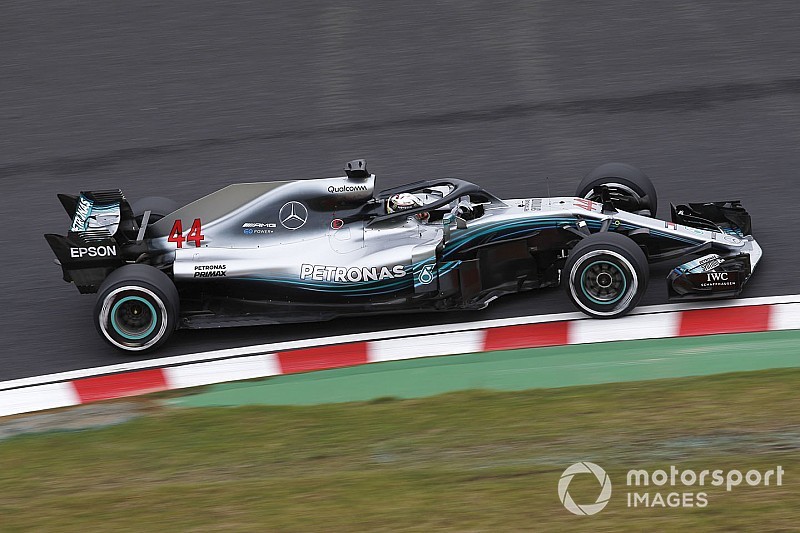 Ricciardo was the session’s early pacesetter as he and teammate Max Verstappen ran quickly on soft tyres in the opening half an hour.

A 1m29.842s from Bottas put Mercedes ahead before the halfway mark on softs.

Bottas headed Sebastian Vettel by a tenth at that point but the Ferrari was running supersoft tyres and barely outpaced Hamilton, who was only on mediums.

When Bottas switched to fresh medium tyres he improved to a 1m29.137s, which Hamilton comfortably eclipsed on his first soft-tyre flying lap by almost half a second.

The Ferraris were no match despite using a second set of new supersofts, having brought an aggressive tyre allocation to Suzuka.

Ricciardo set a 1m29.373s to lap three tenths clear of Ferrari, though Raikkonen was able to steal ahead of his teammate because Vettel lost time in the final corner behind Pierre Gasly.

Toro Rosso driver Gasly, who also had a trip over the grass out of Turn 2 during the morning, had already been involved in an earlier, more dramatic incident with Hamilton.

Gasly was slowing ahead of the chicane before the start of a flying lap but despite checking his mirrors he remained on the racing line and Hamilton, approaching on a fast lap, had to swerve aggressively at the last minute in avoidance.

Hamilton, who is edging closer to a fifth F1 title, locked up and took to the escape road before gesturing his displeasure at Gasly.

The incident will be investigated after the session.

The Point Racing Force India man lapped 1.9s off the pace but impressively outpaced his midfield rivals on soft tyres as they all ran supersofts.

Romain Grosjean was eight-quickest, just over two tenths behind Ocon, while Sauber completed the top 10 with Charles Leclerc a tenth quicker than Marcus Ericsson.

Gasly missed out on a top 10 place despite matching Ericsson’s best time to the thousandth.

The classic Suzuka circuit caught out a few drivers, with Sergio Perez and Fernando Alonso suffering the biggest moments.

Perez had a half-spin at the final corner after dropping a wheel onto the dirt on the outside entering the chicane.

Alonso made the same mistake at the first Degner corner, which sent his McLaren skating across the gravel and ended with the Spaniard facing the wrong way.

He was able to rejoin the track and eventually set the 18th-fastest time, 3.3s off the pace and backed up by 2019 McLaren driver Lando Norris in 20th.

Norris was slowest of all, 3.9s off the pace, as he stood in for Stoffel Vandoorne for his latest FP1 outing of the season.