The F1 world lost a great supporter on Sunday.

Former World Champion Jenson Button's father, John Button, has died of an apparent heart attack at his home on the French Riviera according to reports.

The supportive figure in the 2009 Formula One World Champion driver's career was 70 years old.

A statement released by the driver's agent read: "It is with great sadness and regret that I can confirm John Button passed away at his home in the South of France on Sunday. Whilst we await confirmation, initial signs would indicate a suspected heart attack. A close friend who was visiting John on Sunday was the first to discover the tragic news.

"John's children Jenson, Natasha, Samantha and Tanya and the rest of the family are clearly devastated and ask for their privacy to be respected during this extremely difficult time."

Martin Whitmarsh, head of McLaren Mercedes, Jenson Button's current team, released a note of support: "Speaking on behalf of all at McLaren Mercedes, I want to say how very sad I was to hear the news of John's passing. In my long Formula 1 career, I've encountered many drivers' fathers, but I think it's safe to say that John was perhaps more devoted to his son than any of them. He was not only a great dad, but also a lovely man, and he'll be enormously missed by Jenson, of course, by all at McLaren, and indeed by the Formula 1 community at large." 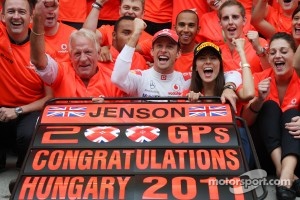 Button's new teammate Kevin Magnussen wrote on Twitter: "I'm very, very sorry for my team-mate, Jenson Button. His dad was a really great guy who will be missed by all in F1."

Button's on track rival Fernando Alonso also tweeted: "My condolences to all the Button family, especially to Jenson Button. Very sad news. John.... a great man, a friend, we will miss him."

The Motorsport.com team would like to express our sincerest condolences to the entire Button family.