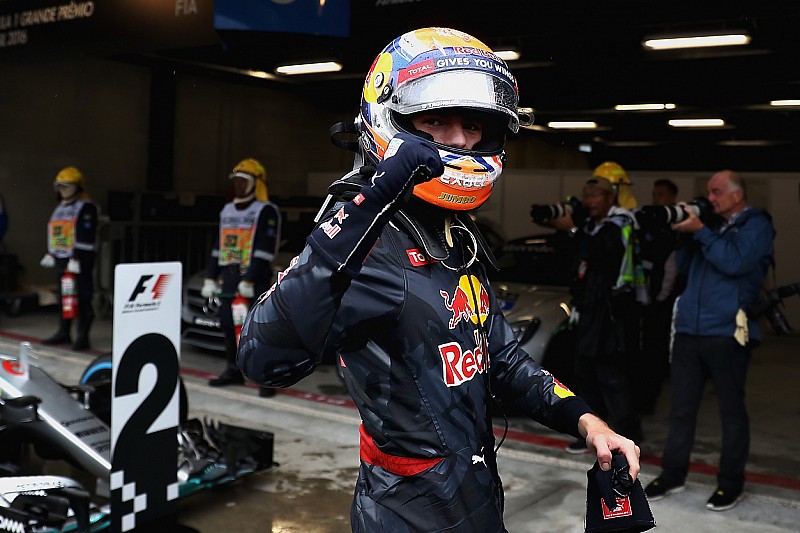 Max Verstappen’s father Jos admits that his son’s storming drive from 16th position to a podium finish in the closing stages of the Brazilian Grand Prix “surprised me”.

Verstappen was caught out on intermediate tyres when rain intensified at Interlagos, and he was forced to pit for fresh extreme wets with less than 20 laps of the race remaining.

Despite that, he charged his way back to third position – having run second in the early stages of race before pitting for intermediates in the first place.

“I must say he surprised me today,” said Jos. “I've seen many races he did, and today it was incredible.

“He did himself a big pleasure today. They didn't have the right strategy, unlucky with weather probably, but afterwards it was worth having a bad stop!

“It's good for Formula 1, everyone is enthusiastic. What more do you want?”

Mercedes chief Niki Lauda took off his hat to Verstappen Sr and Jr following the race.

“Verstappen was outstanding, the way he passed everybody,” said Lauda. “He did a job that was so impressive. I knew the guy is good but he proved it again to everybody what he can do.”

“That was one of the best drives I've seen in F1 to be honest, his recovery was amazing,” said Horner. “We gave it a go on the inters, it looked right at that crossover point.

“Daniel set a few purple sector times, it was the kind of call that could have won you the race, but in the end the rain increased and we gave them a huge amount to do.

“The way he drove the last 15 laps was incredible. From running in fourth or whatever, it was to give that up and to the back of the field, he said 'I can’t get around the last sector on these tyres'.

“So from a safety point of view I said we put him on extremes and go for it. From the moment he set off on that restart, he wanted to get back into a podium position.

“He was using bits of tarmac, looking for the grip, he was weaving and bobbing behind the safety car. He was using all those karting lines, all that experience. He was absolutely fearless in pretty horrific conditions today.”

Of his move on Rosberg for second in the early stages, Horner added: “It was hugely brave. He went straight to the outside and just kept it planted. To drive on the outside, with almost zero visibility.

“It was an amazing drive. He deserved that podium today. The reaction he got from the crowd, it lit up when he took third place.”

Verstappen: "Second was safe but we had to gamble"

Alonso ready to "drive into" Vettel next time