Ferrari's head of engine department Paolo Martinelli talks about the 053 engine The new F1 V10 engine, to be used in the 2004 championship, has been developed using Ferrari's technological and design skills and is called the 053. Paolo ...

The new F1 V10 engine, to be used in the 2004 championship, has been developed using Ferrari's technological and design skills and is called the 053. 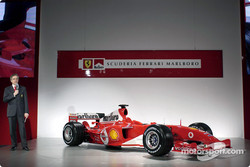 Paolo Martinelli talks about the new Ferrari F2004 engine.
Photo by Ferrari Media Center.
The new regulations for 2004 demand that a driver use just one engine for the entire race weekend, which means that the life of an engine must be substantially increased. Furthermore great attention must be paid to its reliability, especially in the second half of its "working life" which will coincide with Sunday's race. To use an analogy, one could say that our not inconsiderable objective is to have an engine which runs well and strongly from its "Forties to its Eighties."

Therefore, the design and evaluation of the 053 engine, which started life as an evolution of its predecessor, the 052, prioritised reliability in its mission profile.

The majority of engine components have been revised or designed from scratch: the engine can be adapted, or in technical-speak, be "mapped" to suit the requirements of the championship (by this I am thinking of the various circuit types and the different ambient temperatures which can be encountered.)

There are two key elements which shaped the 053 engine project:

1. reliability extended to exceed 700 km, while conserving the required levels of performance and driveability.

2. a strong degree of integration with the car design, which has led to a functional optimisation of the layout (especially in terms of the Marelli electronics, the engine ancillaries and the cooling and lubrication systems.)

In structural terms: the block and heads have been strengthened with the use of new metallurgical solutions aimed at reducing any significant increase in engine weight. In particular, all moving parts are new in order to prolong engine life.

With the invaluable support of Shell, it has been necessary to develop a new fuel and even more significantly, a new engine oil, that provides great stability and protection for the engine.

In terms of engine performance, work will be ongoing throughout the season, with various evolutionary steps already planned.

I would like to add that, on the engine side, our staff are growing in terms of experience and responsibility and we have an impressive group of engineers, both on the design and development side, with specialist strengths in the various areas such as combustion, dynamics, bench testing etc. and in terms of running the engines at the track.

We are therefore looking to the future and continuing the long tradition of our engine academy, which is always looking to innovate in terms of content and work methods.

Finally and as usual, we will not disclose a horsepower figure, but, at the risk of repeating myself, rest assured that once again this year all the Ferrari engine specialists have worked with diligence and determination in order to produce "enough" power, delivered in a useable and reliable fashion in order to reach our objectives in the 2004 F1 championship.

The cars of Ferrari