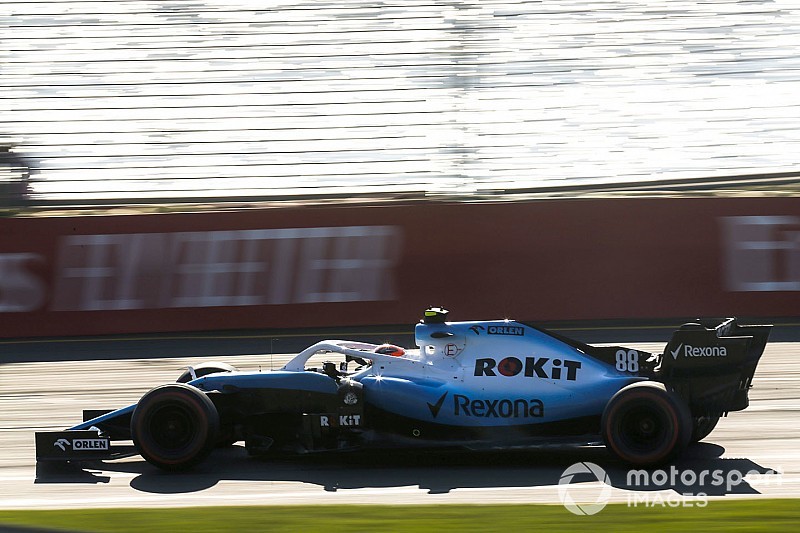 Robert Kubica says a pre-race grid panic that he could not see the start lights, plus a mirror falling off his car early in the Australian Grand Prix, added to the dramas of his Formula 1 return.

The Pole was taking part in his first F1 race since the 2010 Abu Dhabi Grand Prix, although any hopes of a good result were dashed at the first corner when a collision with Pierre Gasly broke his front wing.

But that was not the only incident that the Williams driver had to battle through, as he eventually came home 17th and last.

Speaking about his afternoon, Kubica said the first worry came when he formed up on the grid and realised that his view of the start lights was obscured.

"I had a bit of panic because when I stopped I couldn’t see the lights,” he said. “The rear wing of the McLaren [of Carlos Sainz] was hiding it.

"I could see the first block and not the rest. So I had to move to the left and it was a bit of a panic moment.”

After overcoming that concern, Kubica said that things were tricky away on the run down the first corner before it all went wrong at Turn 1.

“I did a pretty good start but unfortunately with hard tyres then I had a lot of wheelspin.

“So running into Turn 1, I took it very safe and I moved a lot to the inside over the kerb. Once I thought ‘okay this is over’, I went through the first corner, but from what I saw Gasly moved quite a lot to the right and there was contact with Sainz.

“He [Gasly] damaged my front wing. But I didn’t realise 100 metres later that I lost all the wing: I thought I had lost half of it! This wing [flying off] caused other damage to the car, so we had to pit.

“The car was not feeling great, and then additionally on lap three of the race I lost one mirror, which made it even more difficult with blue flags. So it was quite hard.”

Once he got into a rhythm, Kubica’s pace improved in the race, but he says he nearly "laughed" when he was told how good things looked from the pit wall.

“I was told the pace was not bad, and actually it was good, for the car with the state [it was in]. And I nearly started laughing because from the inside it felt very bad!”

Despite his difficult weekend, Kubica said there were some good things to take away from it – especially in terms of better understanding the car.

“There are some positives,” he said. “I think yesterday I couldn’t be happy but it was a complicated day.

"Today was probably even more complicated but from the things I could have control over, I think I did a reasonable good job and I was quite confident that I could do it.

“Probably most of the people had doubts about my physical aspect, the first corner and the start.

"It was my first standing start after eight years and four months. I had never done a standing start on the grid since Abu Dhabi 2010 and actually it was quite good.

“But overall, I am leaving Australia with definitely more experience, and reasonably happy – although I will never think I would say something like this having this pace and finishing so far behind!”

Ferrari explains call to back Leclerc off Vettel

Vettel: Ferrari had "way less grip" than in testing