Kubica says spin triggered by water thrown up by Magnussen 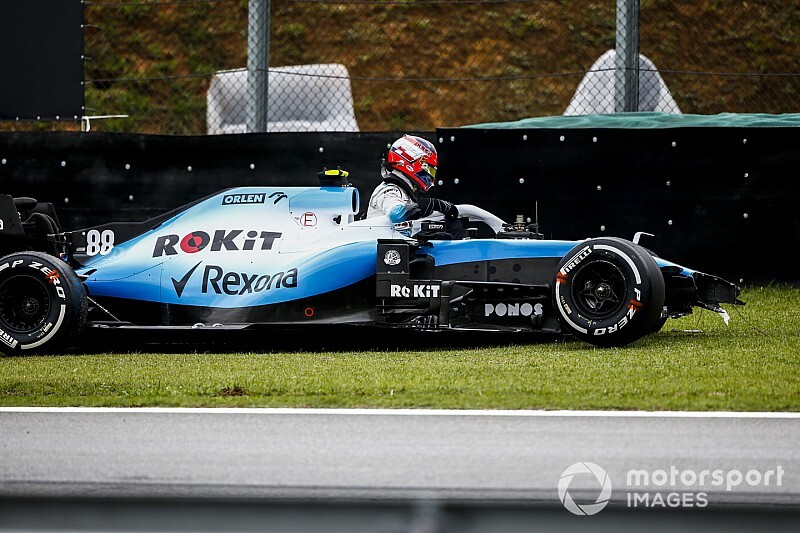 The Pole was on his first flying lap ot he Interlagos weekend, having given his car to Nicholas Latifi for FP1, when his Williams snapped out of control in what he called a "nasty way".

It struck an unprotected Armco barrier with the left front.

Kubica only realised after studying a replay that Haas driver Magnussen had thrown water left after the morning's wet session onto the otherwise dry track.

"I didn't understand in the beginning what happened," said Kubica. "I lost the car in a very, very nasty way, and very late in the corner. But after reviewing images there was a Haas in front of me, a few seconds in front of me.

"He went completely wide over the kerb and pulled out a lot of water, and you can see from from the video that when I'm approaching with the front left tyre I'm lifting a lot of water, but it was already too late. And combined with the hard tyres, first lap, all these factors put together put me into the wall.

"I was I was completely shocked, what happened, completely unprepared. But you know it's difficult to be prepared on such a situation you cannot prevent, and I think it was a very unlucky situation.

"I only understood when I saw images, I thought something broke, but it didn't break. I just lost it completely over the water."

Kubica was unperturbed at hitting the barrier before the tyre wall started, having speared off an at unusual angle.

"Actually from inside the car it didn't feel massive. It looked from outside, let's say from the speed where I went out, I thought I will have bigger impact, but probably the biggest impact was in the front left, and the suspension absorbed and the tyre absorbed quite a lot of impact.

"So yeah, actually I bounced back easily. No drama."

Having not run any flying laps on Friday, Kubica has a lot of catching up to do on Saturday.

"It's not easy and the situation for sure doesn't help, and you know, it's never nice to lose free practice, never nice to actually crash the car.

"But I think today it was just a question of really bad luck, wrong timing, because if I would be closer to him I would see it, if I would be few seconds later maybe my engineer would have told me. So you know, it's unfortunate. This is motorsport."

Regarding the ongoing lack of spares at Williams, he added: "It's not ideal. It is a shame to lose the laps in FP2. It's a shame that in this situation we have to repair the car but that's how it is."