Robert Kubica says that Williams did well to "hide" its issue with a lack of key spares for the FW42 until George Russell's crash in the Russian GP brought it into the open. 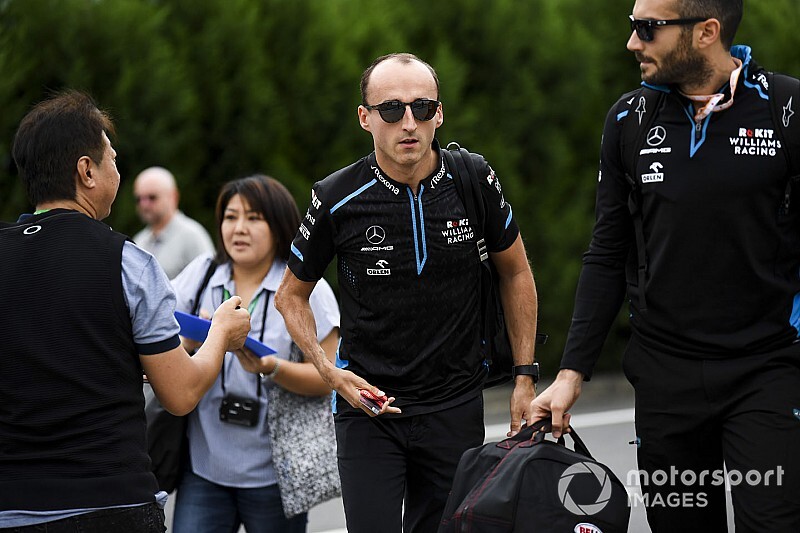 Kubica also distanced himself from sponsor PKN Orlen, who last week issued a statement saying that it had asked Williams for clarification on Kubica's retirement in Sochi, and hinting at potential contractual issues.

Russell crashed in the race due to a wheel retention issue, and because the Englishman had also suffered damage to two front wings the previous weekend in Singapore, Williams feared that it might be left short of parts in Japan should Kubica also have an incident in the race.

He was thus called in and retired shortly after Russell's crash.

Asked by Motorsport.com if the team should have just let him race to the flag, he made it clear that he wasn't happy with the decision.

"It was a bit disappointing from a driver's point of view because we have been in this situation, or at least in races where somehow there is always a risk, but also there is a driver who knows exactly what the situation is," Kubica said.

"I think I did pretty well during all the year to - let's say - save the car as much as you can.

"But I think on the other hand you have to react to the situation we are in and probably from the team's perspective this was the right choice.

"But it's a bit disappointing, especially that it's not the first race of the season, and we have been doing F1 for a pretty long time.

"Of course we were unfortunate with George losing two front wings in Singapore and one in Russia, but still it's racing and it can happen, and I think we were pretty lucky that it happened so late in the season, because probably we would have faced the same problem of Russia earlier in the season.

"As a team we have to react to what happened, and hopefully it will not happen again."

Kubica said he had no issue with the fact that his Sochi race was compromised despite the wing damage occurring on his teammate's car.

"Yeah, but in the end it's a team outcome, and it could happen to me. I think we were very lucky, somehow you have to be lucky as well, because a first lap accident could happen to you every time – you don't know, you have no control over the others.

"Together with George we have been lucky all the season to not do silly things or to limit silly things, and we were able to, let's say, hide the problem for a pretty long time.

"But unfortunately Singapore and Russia showed up that we were not ready for what is called the risk of motorsport and racing, because in the end nothing strange happened - we just lost a couple of front wings. Which might happen every weekend."

Kubica insisted that he didn't know if PKN Orlen was happy with the response it received from the team after a PR spokesman posted a message saying that the company had questioned Williams on the reason for the retirement.

"You'd have to ask my sponsor. Well, not even my sponsor, a sponsor. If you asked me what I think and what my feeling is, there is nothing really to add. I don't have to be happy with the response Orlen got, I don't know what response they got."

Asked if he was surprised by Orlen's intervention he said: "I don't know, I'm not surprised about anything in this world.

"So it's not surprising. I don't know where it came from. I think asking for clarification is correct, I would say. I put myself in different places. But I honestly don't know, I'm not involved in this."

Red Bull's fuel supplier to use new chemicals in Japan