Kvyat convinced Vettel in the wrong over Chinese GP start 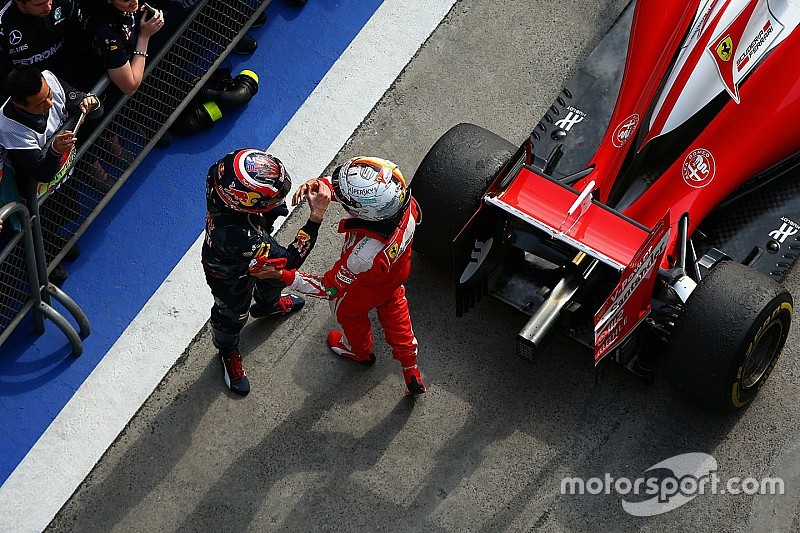 Daniil Kvyat says video footage of the first corner of the Chinese Grand Prix has made him more convinced he did nothing wrong against Sebastian Vettel.

The Red Bull driver believes Ferrari's rivals simply paid the price for not being as ready as they should have been for a battle.

The Russian was labelled a 'torpedo' by Vettel for the way he dived inside the German, who subsequently clashed with his teammate Kimi Raikkonen as he took avoiding action.

Having stood his ground against Vettel immediately after the Chinese race, Kvyat is even more adamant about who was at fault now he has had time to view the footage of the first corner.

Speaking at a Red Bull media event at the Sanki Olympic bobsleigh track on Wednesday, Kvyat pointed out he was one of the few drivers to have actually not messed up the first turn.

"Even if I didn't want to see it, this video was everywhere anyway, so I had to see it," he said when asked by Motorsport.com about if his views on the incident had changed.

"I did what any competitive driver would do and I am very competitive. Obviously it was interesting Turn 1, but on lap one generally in racing there can be many different situations and you have to be ready for any of those.

"Ferrari was less ready for it and they paid the price."

Kvyat reckons that many of his rivals messed up the first corner by braking too late, which allowed him to successfully slingshot down the inside.

"You can see from the video that I braked much earlier than anyone on the grid," he said

"Everyone went too hot in to Turn 1, which opened up the space on the inside and the outside has poor grip as well.

"There is good grip on the inside and I have to thank them for that - that is all I can say about the incident.

"I think we all have our points of view - all the three drivers involved, and it was good to discuss it. Now it is history and now we are focused on the future races, but I guess it was a good episode for Formula 1."

Despite being confronted by Vettel over what happened, Kvyat has said there is no lingering unhappiness about the criticisms.

"I think obviously emotions after the race are high so it is good that even a four-time world champion can have them," he said. "It is good to speak it out.

"I don't know what he will say now, but after the race it is pure emotions for everyone. It is normal.

"Me and him will always treat each other with all our respect and to be honest it is all okay. Honestly there are no problems at all and I would do it all over again."

Kvyat said he felt no need to seek further talks with Vettel but said that if the German wanted to discuss matters he would be happy to have a conversation.

Speaking about if he felt the need to find Vettel for a chat, he said: "No, I don't see any need to do that.

"If he feels so he will do it, but for me it is all quite clear. If someone is not clear and they want to speak then I am always open for a talk. Absolutely."

Kvyat also feels that his aggression at Turn 1 was nothing he had not done before in F1, although previous efforts have been less scrutinised.

"To be honest it had always been like that - you know how F1 is," he said. "I have made many moves in my career already but they have not been in the spotlight - now this seems to have been some audition and has been spoken about.

"But I always went for a space that I saw, especially in the wheel to wheel racing as most drivers know they cannot leave the door open. I think there is not a driver who didn't learn that."

Hamilton: I want to end career as successful as Rossi