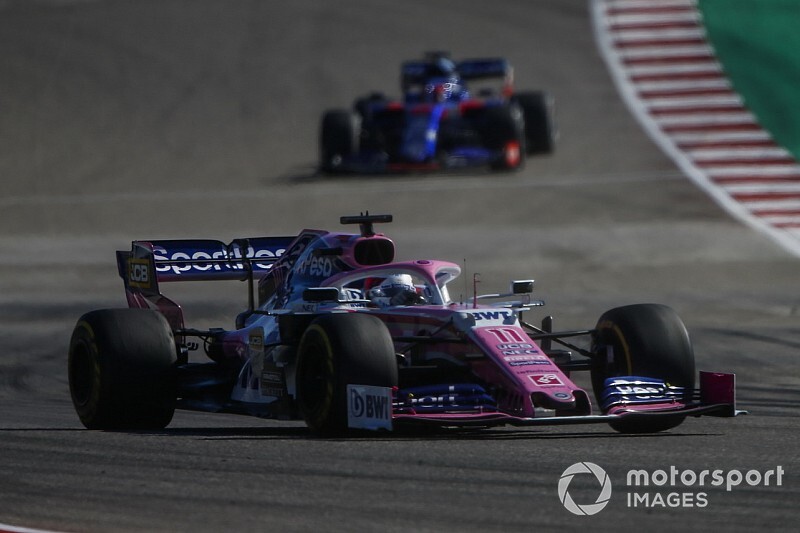 Daniil Kvyat has described his penalty for colliding with Sergio Perez in the United States Grand Prix as "stupid" and "unacceptable".

Kvyat had lunged down the inside of Perez at the Turn 15 right-hander on the final lap, slamming into the left front wing endplate of the Racing Point with his right front tyre and forcing Perez off.

Perez rejoined and stayed side by side with Kvyat despite the contact, but the Russian completed the move around the outside of the following corner to secure 10th on the road - only to be assessed a five-second penalty shortly after the race, which dropped him to 12th.

When made aware of the penalty post-race, Toro Rosso driver Kvyat told Ziggo Sport: "That's bullshit. That's unbelievable. I don't know, I have no words. It's so stupid.

"I just went around the inside and he closed the door, it's normal. And then we touched and I overtook him around the outside.

"It [the verdict] is unacceptable."

The penalty marked the second time in two races that Kvyat had disagreed with a post-race penalty decision that cost him a points finish - the Russian having been penalised for colliding with Nico Hulkenberg on the final lap of the preceding Mexican Grand Prix.

Discussing Kvyat's move at COTA, Perez reckoned the Toro Rosso driver did not slow down as much for yellow flags waved at Turn 12 for Kevin Magnussen's stricken Haas, and was thus in range to launch his attack.

The penalty decision leaves Perez's Racing Point team one point clear of Toro Rosso in the fight for sixth in the constructors' championship.

Toro Rosso's other driver Gasly had himself clashed with Perez a few laps prior to his teammate Kvyat, as he tried to fend off the Mexican for ninth place but sustained damage and was ultimately forced into retirement.

"Three laps toward the end we started to fight with Sergio, and we came together in Turn 13," Gasly explained.

"Turn 12 [we were] already crossing [lines] and battling. He went down the inside in Turn 13, and then we just touched with my front right tyre, and [the contact] just bent the front right suspension."

Asked whether either driver was at fault for the incident, Gasly said: "Honestly, whatever it is, it's not going to give me back the points that were on the table.

"I don't know. I will have a look at the video, see what's happened. I don't think there was anything big, but unfortunately it was just enough to bend the suspension and to end our race."