The late decision to raise the rear wings on Formula 1 cars next season was reached because it is considered the best compromise to improve drivers' rearward vision. 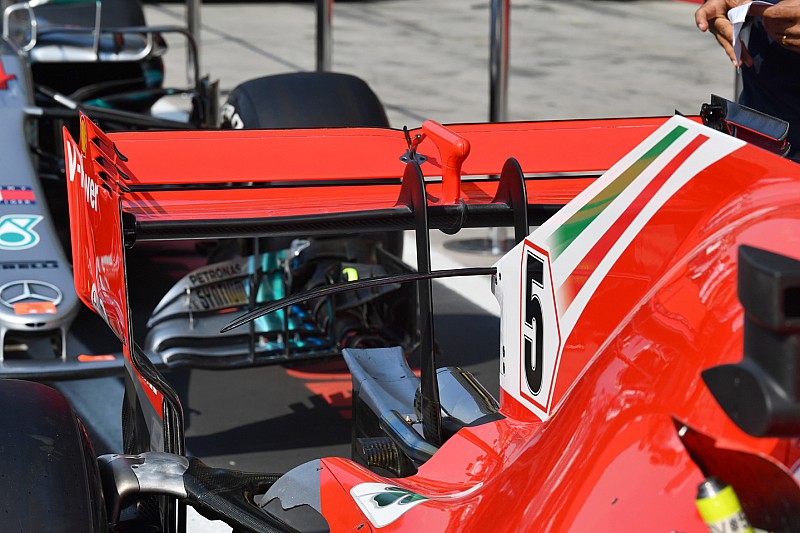 As revealed by Motorsport.com, rear wings will be 50mm higher in 2019 to create a bigger window of visibility between the lower surface of the main plane and the top surface of the sidepod.

This is being done as part of measures agreed to help drivers' rear visibility, something the FIA has been investigating the start of the year.

"That particular example is just one of many in the way that exchanges happen between the teams and the FIA," said Haas head of aerodynamics Ben Agathangelou.

"With respect to the rear wing in particular, although it was quite late, there was a fair amount of discussion that preceded it that investigated alternative ways of increasing visibility, like reducing the rear wing box height.

"There was a general consensus that because development had been under way, we were dealing with a wing that fit a particular box.

"The fact that it shoots up by 50mm isn't a game-changer, so the maturity, if you like, that precedes a decision is fair and we're all familiar with that."

The debate about poor rear visibility resurfaced at the Belgian GP last weekend when an unsighted Stoffel Vandoorne was accidentally pushed off the track by Valtteri Bottas in practice.

Another high-profile near miss occurred during qualifying for the Austrian GP, when Sebastian Vettel accidentally blocked Carlos Sainz.

Sauber technical director Simone Resta said it should not compromise 2019 development work too much and is worth it in any case.

"Of course, having the rules defined as early as possible helps all of us to just lay down the [framework] of the car and work developing it.

"But ultimately I think everyone has got a big engineering group behind us and we can adapt to it and follow it, especially in a case like that where it's done for the purpose of safety."

Ferrari technical chief Mattia Binotto stressed it was not a change being forced on the teams.

"You cannot change the regulations if there is not unanimity from all the teams," he said. "The teams have accepted, it means that somehow we are able to manage and to [handle] the change.