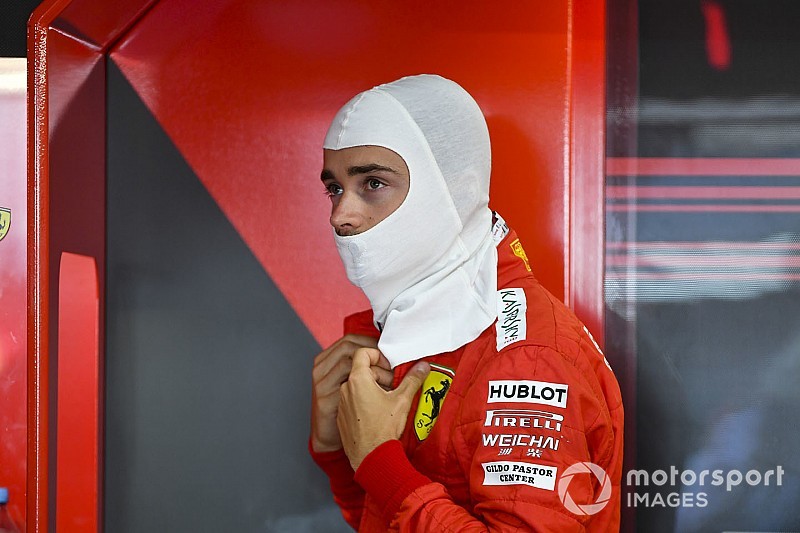 Charles Leclerc says it is "unacceptable" to have what he considered as low-grip asphalt at the corner in which the Ferrari driver crashed out of Formula 1's German Grand Prix.

Leclerc also admitted that he was "completely at fault" for the crash after sliding off on the approach to Turn 15 and skating across the soaking wet run-off and into the barriers.

The Ferrari man had been set to take over the lead of the race following Lewis Hamilton's pitstop - the Mercedes driver damaged his front wing shortly after - but instead, Leclerc was forced into retirement.

Leclerc then hit out at the track conditions, following similar offs at the same corner for Hamilton and Renault's Nico Hulkenberg.

"I'm disappointed with myself today," Leclerc said to Scandinavian broadcaster Viaplay. "It's not a huge mistake. It's a small mistake, I've done a lot bigger mistakes during the season.

"It doesn't make anything better for my mistake but, first of all, I think the Tarmac in the last two corners - it's just unacceptable we have that on a Formula 1 track when it's wet.

"We can't have so much low grip. We've seen other drivers [go off], maybe I was the only one on slicks but I was at 60kph and had absolutely no grip. There's something there.

"But overall that does not forgive my mistake. I'm completely at fault today and it's a huge shame. I'm very sorry for the fans and the team."

While Leclerc had climbed from 10th on the grid and into victory contention, teammate Sebastian Vettel rose from last place to take second place at the flag.

The four-time world champion struggled to make up ground in the mid-phase of the race, after he had switched to intermediates following a rise into the top 10 within the first six laps.

"It took a while I don't think there was a problem but at the beginning, with the intermediates, I couldn't get the hang of it, but eventually I got going, so it's good the afternoon took so long," said Vettel.

He continued: "Before the last safety [car, caused by Valtteri Bottas] I realised I was quite a bit quicker and happy to pass people.

"I was a little faster and could time it [overtaking] right. I saw a lot of people being cautious into the first corner and that's why I was giving it everything to get into DRS range and make the move down the back straight."

Kvyat: German GP was "horror movie with a bit of black comedy"