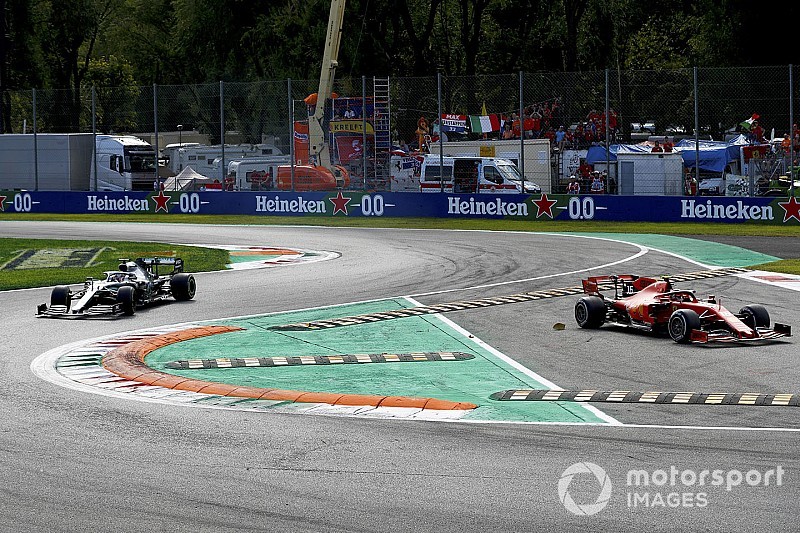 Mercedes boss Toto Wolff thinks Charles Leclerc's defensive driving was perhaps "over the line" in the Italian Grand Prix, as he said Lewis Hamilton was instrumental in preventing a crash.

Hamilton was forced to take evasive action twice in the fight with Leclerc for the lead at Monza – once running wide at the second chicane to avoid an incident and then later having to back off as his Ferrari rival blocked him through Curva Grande.

Although Leclerc was handed a black-and-white warning flag for the first incident, Wolff suggested that his action could have perhaps been worthy of more.

"They [the stewards] are in a very difficult situation, to come up with the right decisions, that are not always clear cut," said Wolff after the race.

"I know you want to have some more spicy stuff and I just said to Martin Brundle, I have enough of my own problems to solve that I don't want to have [F1 race director] Michael Masi's problems on top of that.

"The racing was very hard, maybe over the line - and Lewis I think was instrumental in not making it an incident.

"But at the end of the day, what do you do? You give a leading Ferrari in Monza a five-second penalty? Out of the question….because then we need a police escort out of here."

Hamilton suggested that the approach to driving etiquette and penalties being handed out had now changed – and he was baffled about why Leclerc got away with only a warning.

"That's racing, I guess. I had to avoid colliding with him a couple of times. But that's how the racing is today," he said. "We've constantly asked for consistency.

"There was a rule put in place and it wasn't abided by today. They used a different consequence. I don't really know why that was the case. I guess the stewards woke up on a different side of the bed."

Wolff suggested that the use of the black-and-white flag had opened a can of worms with drivers now pushing the limits more than they would have in the past because they know that they will likely get a warning first.

"There will be more cars touching, it will be more of a common practice," he said. "In my opinion it's going to go to the point that it will end up again in a collision, and then we're going to bail out of it again, or crawl back. This is the modus operandi. Until then, we let them race."

Gallery: All Ferrari wins at the Italian Grand Prix