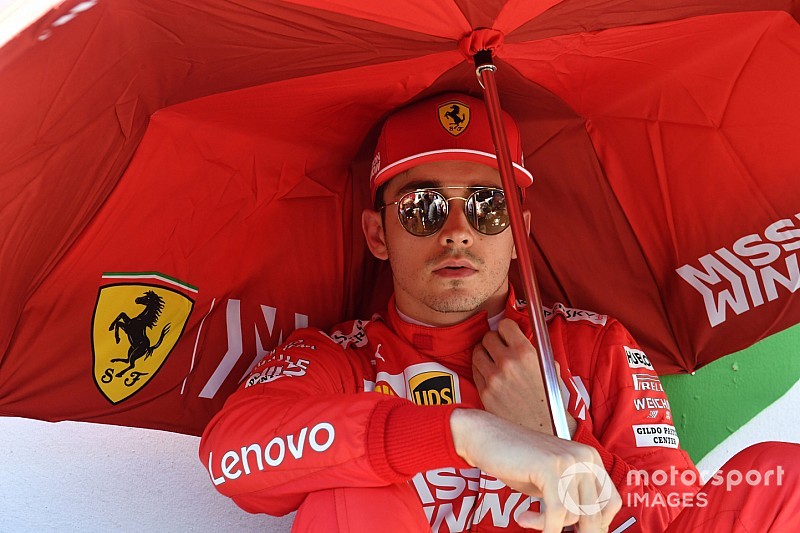 Jacques Villeneuve says Charles Leclerc is "having a negative effect" on Ferrari, because the team wasn't ready to manage a competition between Sebastian Vettel and its ambitious young protege.

Former world champion Villeneuve stresses that Leclerc was ready to graduate for a top team after his single season with Sauber, but says that his presence has unbalanced Ferrari and unsettled Vettel.

"If you listen to any fan or go on the forums, even the qualifying accident [in Baku], Leclerc doesn't get criticised," Villeneuve told Motorsport.com, referring to the Monegasque's crash during qualifying in Azerbaijan.

"If it had been Vettel, he would have been destroyed by the media and everyone, for the same mistake.

"Ultimately I think that's having a negative effect for the team. Seb's spin in Bahrain came because of that, then the team orders in China, it all comes from there.

"And Leclerc's accident in qualifying also, wanting to prove that he's the number one of the team. Ultimately that's damaging the whole team.

"I hope it re-balances out, because they should have been the one that's being chased by Mercedes, and instead they've got three podiums, and that's it. It's not had a good positive effect on the team, that's all."

Villeneuve says that knowing that it was in a position to launch a strong title challenge in 2019, Ferrari should have maintained stability by keeping Kimi Raikkonen, and thus ensuring that Vettel felt comfortable.

"Leclerc is quick, he personally is ready," Villeneuve said. "It's Ferrari that's not ready for this kind of situation.

"If you take Leclerc's perspective, it's great to be there this year, for him it's amazing, and he's shown that he's super quick.

"But if you take Ferrari as a team, you have to look at Vettel's past, and you have to remember Ricciardo when he joined Red Bull. Seb needs to know that he's loved by the team, and by the fans, and that's gone this year."

Villeneuve believes that the team could have kept Raikkonen for another year, pointing out that Mercedes had opted for stability by keeping Valtteri Bottas alongside Lewis Hamilton when Esteban Ocon was an obvious option.

"They already had Leclerc, so they could have given him a contract for 2020 and 2021, and kept Kimi for just one year, because this was the year to fight. Then everybody's happy, because you give them time in advance, it doesn't unbalance anything.

"That's not saying Leclerc is not good, he's amazing, he's super quick, he deserves to be there, that's not the issue. But the way Ferrari operates, the way Seb is, he needs this kind of love around him, and it was just not the right move.

"Look what they did at Mercedes, and look how strong it is this year. If they had put Ocon there, Lewis would have reacted the same way – he would have wanted to eat him alive straight away, and destroy him.

"But there's respect with Bottas, and even if they both have two victories, Lewis doesn't seem to be upset about it. That wasn't the case with Nico [Rosberg] for example, and that really allows the team to perform at a level that it almost hasn't performed at before."

Sainz: McLaren still needs to improve in "every area"