Leclerc a "very tough" driver for his age - Bottas

Mercedes Formula 1 driver Valtteri Bottas says Charles Leclerc is a "very tough" racer given his age and complimented the 21-year-old's approach to his first year with Ferrari. 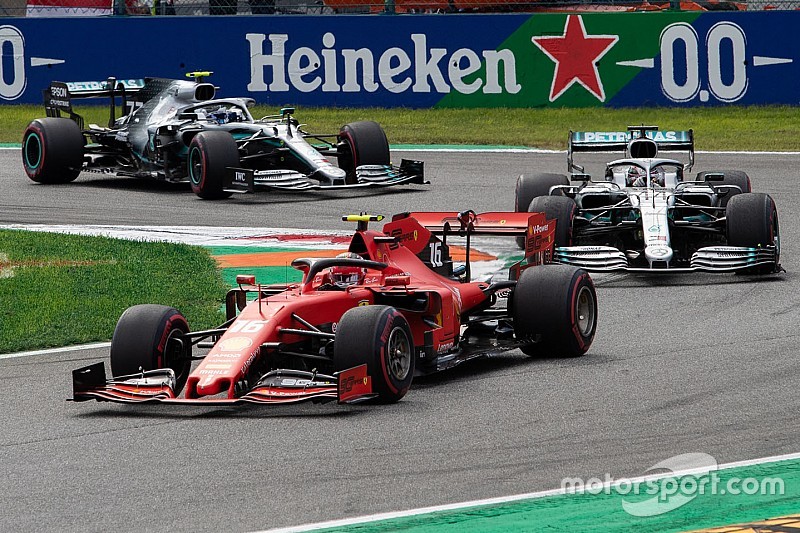 Leclerc won the Italian Grand Prix after a feisty drive in which he defended aggressively against Lewis Hamilton and then kept the championship leader's teammate Bottas at bay in the closing laps.

During the race, Leclerc picked up a black/white warning flag for moving under braking in his battle with Hamilton, a continuation of a more aggressive approach first seen in the British Grand Prix.

Asked if he was surprised by how cold Leclerc could be on track, Bottas said: "I haven't seen anything from the race apart from what I saw in the car, so I can't say much.

"I heard some talk in the press conference but I have no clue what happened [between Leclerc and Hamilton].

"But for sure he's racing hard. When you're in the lead there's no way you want to give it up. For a young guy he is a very tough racer, which is good to see. [It as] As you should [be] when you're a Ferrari driver."

Hamilton said he had to avoid collisions with Leclerc during their battle and would have driven differently if he did not risk harming his championship prospects.

However, Bottas claims said he did not approach Leclerc - not in title contention and focused on winning Ferrari's home race - any differently.

Bottas trails Hamilton by 63 points in the championship, having closed the gap by two points by finishing second at Monza, where he failed to launch an attack on Leclerc after moving ahead of Hamilton.

"I knew about halfway through the race the win was possible; how things were going and the pace I had on the medium I thought there will be opportunities at the end of the race.

"It was always the plan for me to go long in the first stint and have opportunities later on. We had those but we couldn't make it really happen. The only thing in my mind was to maximise this race and go for the win.

"There's nothing I would have done different in any other case."

Opinion: The solution that can solve F1's sausage kerb dilemma