Another solid race for Lotus F1 Team in Singapore. Kimi Räikkönen fought back from twelfth on the grid to maintain his third position in the Drivers' Championship with a battling sixth place in the Singapore Grand Prix.

Romain Grosjean finished close behind in seventh after a gruelling race with two safety car periods and a number of retirements.

So far it has been a break through year for Lotus Formula 1 Team in 2012, currently fourth in the constructors championship, well clear of Mercedes in fifth, Lotus are still in striking distance on 2nd and 3rd as the races count down to the finale in Brazil in November. 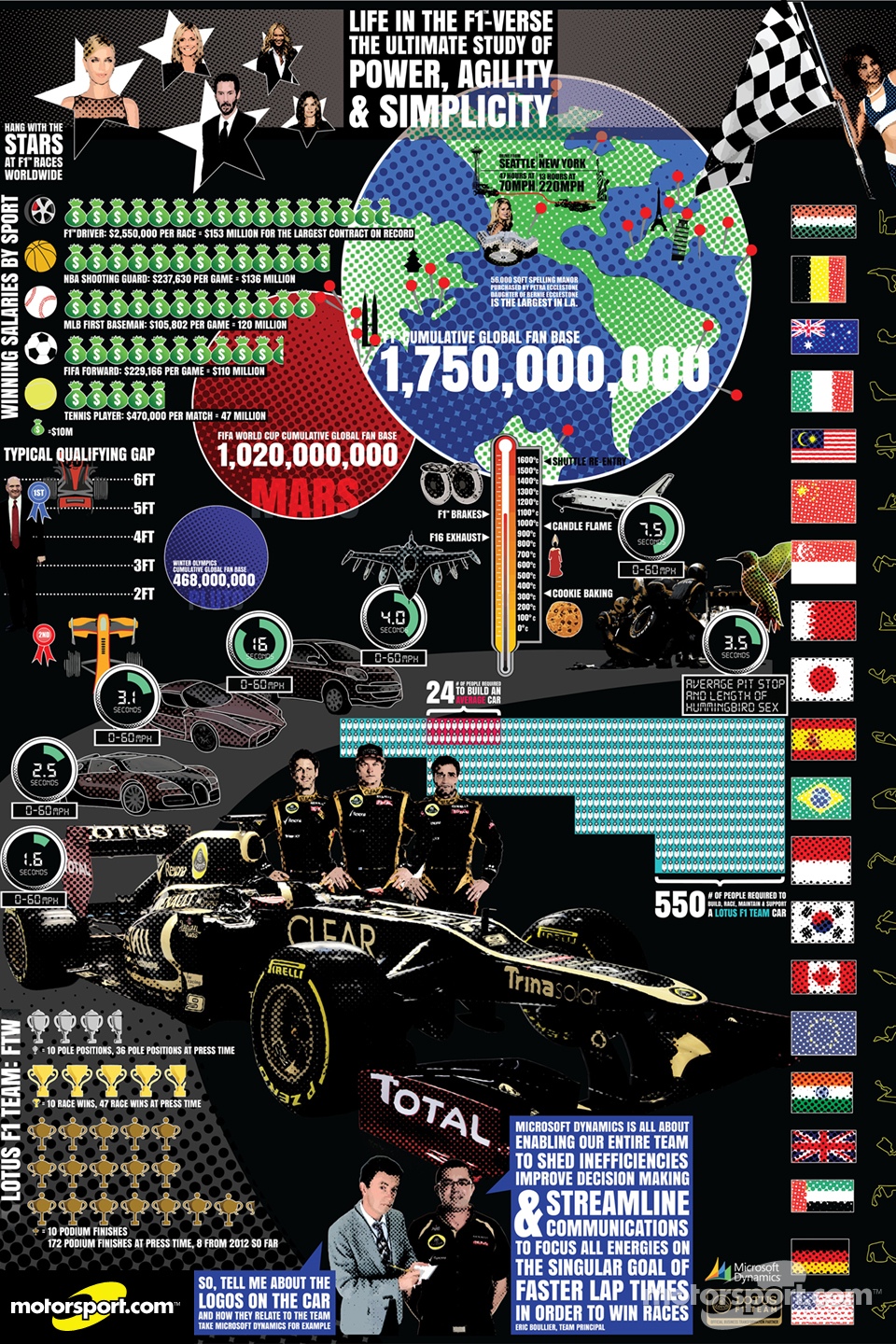 Where has this improvement in form over last year come from, especially during the very tough and restrictive RRA, or Resource Restriction Agreement?

Going fast in Formula One requires more than building top-notch race cars and putting talented drivers behind the wheel. Although both elements are certainly pivotal to success, a measure of simplicity is also important in the fast-paced, complexity-driven world that is Formula One. And, part of that simplicity involves trimming costs through optimizing the processes by which key tasks are performed within a team.

Since fall 2010, Formula One teams have operated under a Resource Restriction Agreement known as the RRA that places a spending cap on how much money teams can pour into their respective racing operations. The idea is to cut spending while leveling the playing field as much as possible between the sport’s big, mid-sized and small teams.

Even as Formula One teams continued to wrangle about the specific details of these restrictions as late as early August, it remains that spending limits have forced teams to re-evaluate all aspects of their business while they seek to maintain a competitive edge in the ultra-competitive world of Formula One. 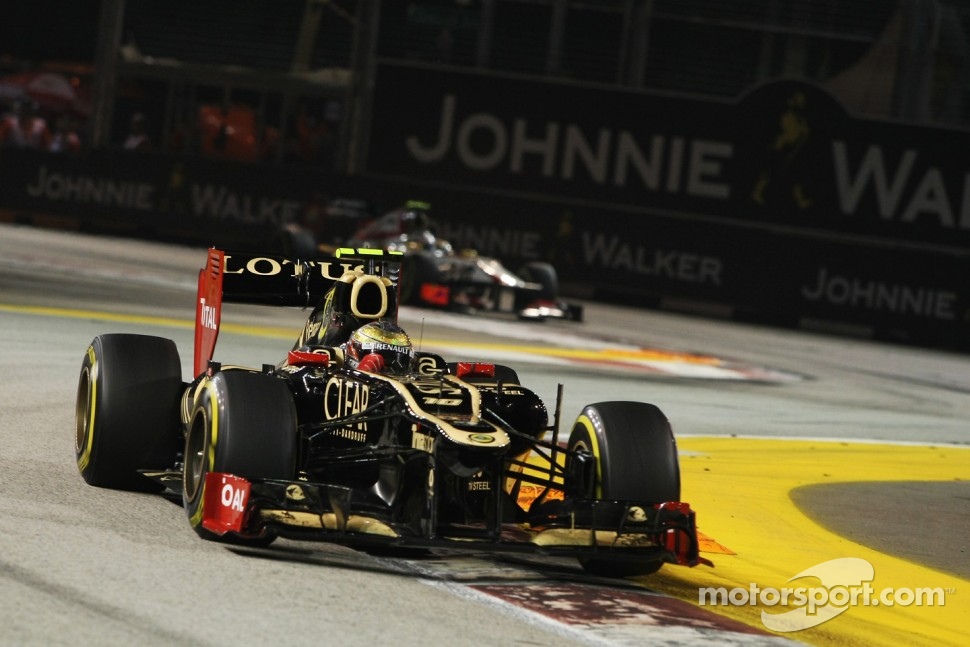 Motorsport.com got an exclusive look inside the world’s largest software company’s first foray into F1. Through a strategic partnership formed in March with Microsoft Dynamics, the Enstone, England-based Lotus F1 Team is making strides toward this goal.

Along with changing its name from Lotus Renault GP to the Lotus F1 Team, and ushering in a pair of acclaimed new race drivers in 2007 Formula One World Champion Kimi Raikkonen and 2011 GP2 Series champion Romain Grosjean, the Lotus F1 Team embarked on another new beginning in 2012.

That new beginning was its partnership with Microsoft Dynamics, a line of enterprise resource planning (ERP) and customer relationship management (CRM) software applications developed by Microsoft to make organizations more agile and globally competitive in today’s business environment. “The Lotus F1 Team is a true testament to our Dynamic Business vision and how one customer uses these tools to not only run a successful enterprise, but to win races and beat the competition.” said Fred Studer, general manager of Microsoft Dynamics.

Lotus will have one integrated system and not the separation between the factory and the performance.

The environment in which the Lotus F1 Team operates is highly competitive and always on the cutting edge, with 24 drivers and 12 race teams all aiming to be No. 1 in Formula One, the world’s most sophisticated and competitive form of motorsports. With a global fan base of some 1,750,000,000, Formula One will compete 20 times this year in 19 countries, and on five continents. This year’s grid features six former World Champions, including Finland’s Raikkonen — one of the sport’s brightest stars.

To be competitive in the world of Formula One, the Lotus F1 Team employs 550 people at its Enstone headquarters. This vast number of personnel is required to build, maintain and race the Lotus F1 Team car — which can travel from zero to 60 miles per hour in 1.6 seconds.

“Microsoft Dynamics is all about enabling our entire team to shed inefficiencies, improve decision-making and streamline communications to focus all energies on the singular goal of faster lap times in order to win races,” Lotus F1 Team boss Eric Boullier said.

“Managing a time-sensitive operation like Lotus F1 Team requires that the people in the organization are equipped with the right set of tools — tools that are powerful, agile, and give people the information they need to do their jobs effectively anywhere and on any device,” Christian Pedersen, general manager of Microsoft Dynamics ERP Product Marketing said.

Lotus F1 Team employees are highly passionate and acutely aware of their contributions to the success of the business and the team, knowing how every thousandth of a second counts on the track. Even the smallest parts of a car go through constant enhancements and iterations in design, aerodynamic optimization, and structural strengthening.

Thousands of evolutionary designs are created during the racing season based on terabytes of logged data, wind tunnel tests, and computerized simulations running on cutting-edge super computers. Bringing out innovations faster and better than competitors creates a sense of urgency in the organization, where a process from conceptualization, design, procurement, manufacturing, testing, and deployment to finished car is often counted in days, and is critical to the team’s on-track success.

The first few months of the three-year partnership have reaped substantial benefits for all involved. With Microsoft personnel working directly with the Lotus F1 Team to continuously transform and optimize operations toward a world-class facility, drivers Raikkonen and Grosjean have enjoyed a terrific first half of 2012.A season after Lotus finished on the podium only twice in 19 events, Raikkonen and Grosjean had combined for eight podium finishes over the first 11 events of the 20-race 2012 season.

Both drivers have provided stiff competition to the likes of reigning constructors’ champion Red Bull, as well as perennial frontrunners McLaren and Ferrari.And, with the Lotus F1 Team drivers contending for podiums and victories on a regular basis, Microsoft Dynamics — with branding on both of the team’s “E20” race cars and the drivers’ overalls — has received maximum exposure in front of a vast, worldwide audience. So the partnership has been a win-win situation for both Microsoft and Lotus F1.

Giovinazzi no longer needs Raikkonen as a reference – Vasseur