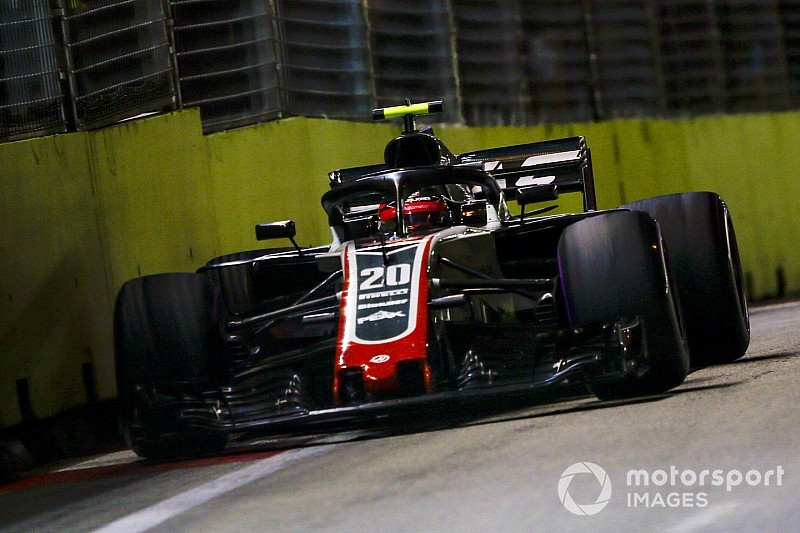 Kevin Magnussen says he cannot explain why he was a second slower than Haas teammate Romain Grosjean during qualifying for the 2018 Formula 1 Singapore Grand Prix.

Magnussen was eliminated during Q1, in which Grosjean set the fourth quickest time, and was a bystander as Grosjean went on to qualify eighth overall.

"It's frustrating and this whole weekend has been a bit hopeless," said Magnussen. "It doesn't quite make any sense. I haven't been able to find the grip that Romain seemed to have.

"From the very first lap it feels like I've been one big step behind, no matter what. And I haven't even been able to get close except for that one run in Q1 - the first run where we had the same conditions and suddenly our data looked the same."

"In that first Q1 run it looked like I had the pace," he said. "All the way from Friday up until that point I'd been shit, then one run I'm fine, then the next run I'm shit.

"In your second Q1 run you expect a bit of improvement from the track - and it didn't happen. I was only able to do the same time as before… but Romain found 1.2 seconds.

"It was like lots of grip came to him but no grip came to me. That can only be tyres, really - I didn't have any damage, everything looks fine in terms of numbers, so there was something that wasn't in the window in terms of tyres and I don't know what that is.

"We're not talking about the lack of a few tenths, we're talking one second. How the hell? I'm driving the same, so it doesn't make sense.

"In a situation like this it makes you question everything. And the only thing that I can't guarantee is working is the tyres.

"The car is fine. For me there's too big an inconsistency from one set of tyres to the next, so it make you question whether those tyres are exactly the same.

"I've never been a second off my teammate in my whole career, ever."

Haas team principal Gunther Steiner suggested that the problems could be related to the warm-up procedure on Magnussen's preparation laps.

"There's a lot of data that we need to look through," he said. "Temperatures are the first thing you need to figure out, whether they are the same as the other car, and then if not, why not.

"These tyres are very sensitive - two or three degrees can make a difference - and I don't think Kevin is the only driver who has had these problems today."