Sauber and Charles Leclerc have no reason to be upset by Kevin Magnussen’s driving in the Japanese Grand Prix, according to Haas Formula 1 team boss Gunther Steiner. 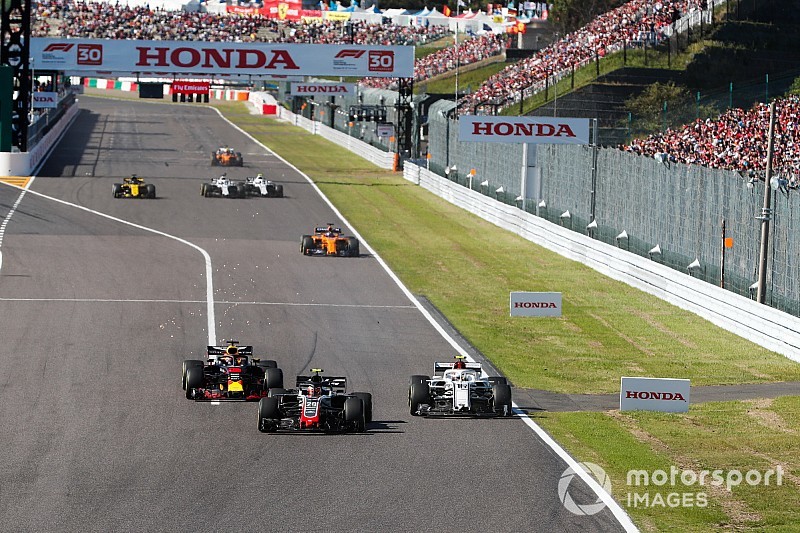 The two drivers collided on the second lap of the race when Leclerc jinked to the right down the start-finish straight and rear-ended Magnussen as the Dane moved across to defend.

Magnussen picked up a left-rear puncture that caused enough damage to the car to force his eventual retirement, while Leclerc damaged his front wing.

Leclerc was angry with Magnussen after the reason but asked if he and his team have reason to be upset, Steiner said: "No. He [Leclerc] ran into him. He ran into him.

"Kevin didn't brake. He didn't push him off or anything, Kevin just moved over to his line and he ran into him.

When suggested by Motorsport.com that the concern was Magnussen moved over in a manner he should not, Steiner said: "It was before the braking point. It was not under braking."

Then, when asked by Motorsport.com if he felt Leclerc should bear some responsibility, Steiner said: "Exactly, that's what I think. He [Leclerc] needs to judge what he can do and what he cannot.

"He [Magnussen] didn't run into the side of him, he was clearly in front because he could move in front of him."

Leclerc branded his rival "dangerous" after the clash and the rookie said he had more trouble with Magnussen this season than any other driver.

It is not the first time Magnussen's driving has been criticised this season, with Pierre Gasly and Fernando Alonso both hitting out at his defensive moves at times.

Steiner has stood up for his driver before and declared him an easy target.

Asked by Motorsport.com if that was the case here, Steiner said: "Absolutely. It's more of the same. And I'm getting quite tired of this.

"If they have a problem with him just blame him for it because it's quite normal."

Hamilton didn't expect Vettel to "tail off" like this