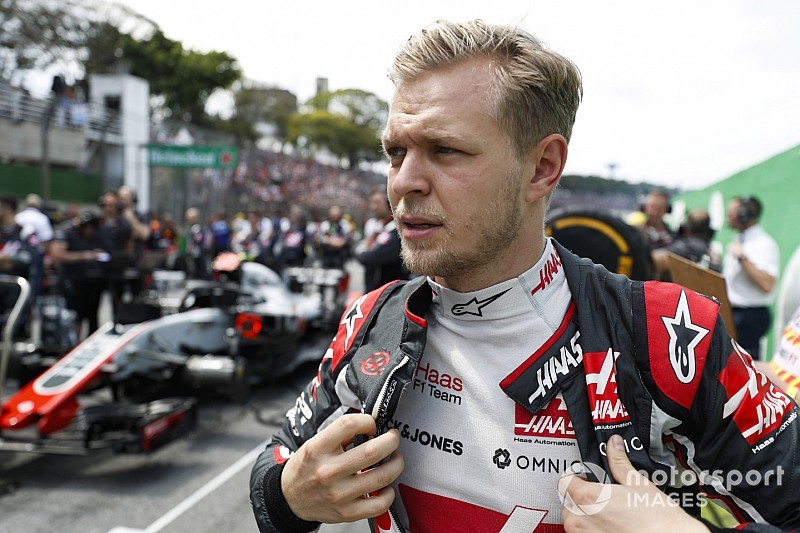 Haas boss Gunther Steiner does not understand why Kevin Magnussen has been tagged with a 'wild' reputation - or people think his form fades away over a season.

The Dane was on the receiving end of criticism from several rivals for his robust driving this year, which included a famous row with Fernando Alonso during qualifying for the Italian Grand Prix.

But Steiner, who re-signed Magnussen to a new contract, thinks that the perception of his driver does not match reality.

"Let's put that one right: he is the guy with the least penalties," said Steiner, referring to the fact that Magnussen has only two penalty points on his licence.

"It's like I think he got somehow such a bad rep and the perception is out there he's this guy which is just wild. Which is wrong. Because look at the statistics. We must be objective. Not subjective. Objective is how many penalties has he got or not."

Steiner also thinks it wrong to suggest that Magnussen always struggles in the second half a season, despite a more difficult end to 2018.

"There is this thing out there that Kevin Magnussen's second half of the season always is bad," he said. "Again, where is this coming from?

"He has done some good races in the second half of the season this year. Was he as good as the first half this season? No. But I would not jump to the conclusion that it has to be like this, you know.

"I don't think he is as bad as people make him out to be. He's a racer. He drives. He fights for his territory. And that's what we pay him to do actually, you know. We don't want somebody who gets passed by everybody."

Steiner has also played down talk that Magnussen's teammate Romain Grosjean had a big crisis at the start of 2018, despite failing to score until the Austrian Grands Prix.

"Let's not exaggerate. It was not huge, tremendous or whatever. He had a dip. Leave it at that, you know. It was a dip," explained Steiner.

Asked how Grosjean turned his campaign around, Steiner said: "I don't know. I don't have the answer. It's all about the key.

"If you speak with him, speak about the key. He lost the key, he found the key. I don't know what it is and that's honest, you know. And he seems to be and he said: I found the key again. Since then it was good."

Asked if he was ever worried that Grosjean would not be able to recover, Steiner said: "My thinking was not in a way negative that he doesn't find it. For me it was more like: how can I get him back to how we know him."

Ricky Bryant does the Double at Rougemont