Helmut Marko says the death of his “constant companion” three-time Formula 1 champion Niki Lauda is made “all the more painful” by their close friendship. 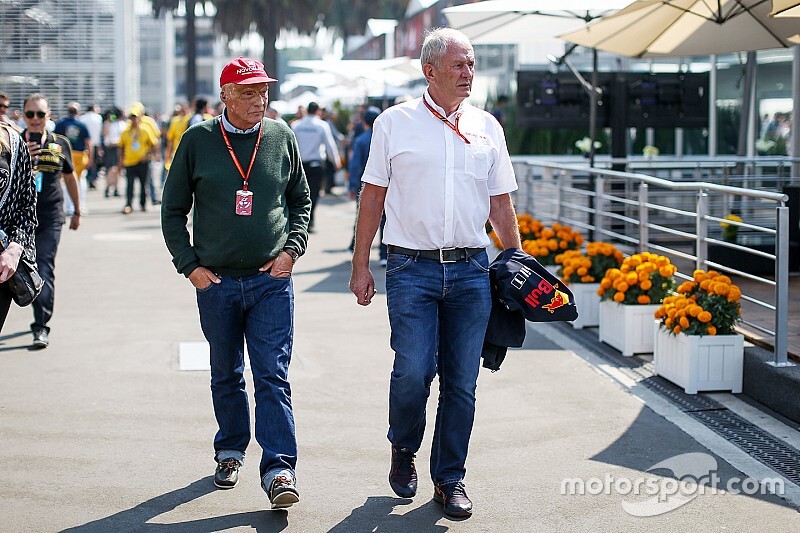 Lauda, who was Mercedes’ non-executive chairman, passed away on Monday night aged 70, after battling health issues for almost a year.

Red Bull motorsport advisor Marko says he first met his fellow Austrian “around 1968” and the two followed each closely through their racing careers and later when they moved into non-driving roles.

“I knew he was not in a good condition, but still, when the news comes, it's a blow,” Marko told Austrian TV channel oe24.TV in a telephone interview.

"Throughout my racing career Niki was my constant companion. Both on the driving side and in management.

“There have been so many experiences, so many shared actions and shared funny events. And then this.

“That's just hard. There is no one in the whole Formula 1 scene who can even get close to him in terms of personality, humour and straightforwardness.”

Marko said he had visited Lauda in hospital in Vienna last year, and admitted he was “horrified” when he saw him but recognised the ex-Ferrari and McLaren driver was “still full of optimism and there was still power in his voice”.

He said that he and Lauda spent time together following the death of Jochen Rindt, the posthumous 1970 world champion, even though “there was a fight to be his successor”.

Marko claimed he had a preliminary contract with Ferrari before his F1 career was ended prematurely when a stone pierced his helmet while driving for BRM in the 1972 French Grand Prix and permanently blinded his left eye.

He said that indirectly led to him helping Lauda negotiate his own deal to move to Ferrari, where he won two world titles.

Marko said: “He first took over the BRM cockpit and then the Ferrari seat. We drove to Modena together, he asked me to accompany him to negotiate his first contract with Enzo.

“I thought to myself, 'Niki will inherit all this, is that fair?’ But on closer analysis I was out anyway, and then I much prefer it is an Austrian who gets into all this than anyone else.

“There's no trace of bitterness or envy. Perhaps at the beginning, but from the logic I realised 'I can't change it anyway, and then it's better, it's Niki'. From then on we were always in contact in some way.”

Marko hailed Lauda’s conduct away from F1, highlighting his behaviour in the aftermath of the fatal crash his airline suffered in Thailand in 1991.

He hailed Lauda’s “meticulousness and stubbornness” – which Marko said was “typical of him” – and how he “proved to a global corporation like Boeing that it was not his fault, or that of the pilots, but that it was a design flaw”.

Marko said that when Lauda was still attending grands prix last year before falling ill “we had breakfast together at every grand prix”.

“We looked outside the box, beyond the small-minded,” said Marko. “The most important thing for us was always the attractiveness of the sport.”

Marko described Lauda as a “real family man”, “one of the great Austrians” and a “good, generous person”.

Asked if they were true friends, Marko said: “Yes. You could say so. It is all the more painful now.”

How Verstappen recovered from rock bottom