Massa column: Aggressive Perez helped me out in Monaco 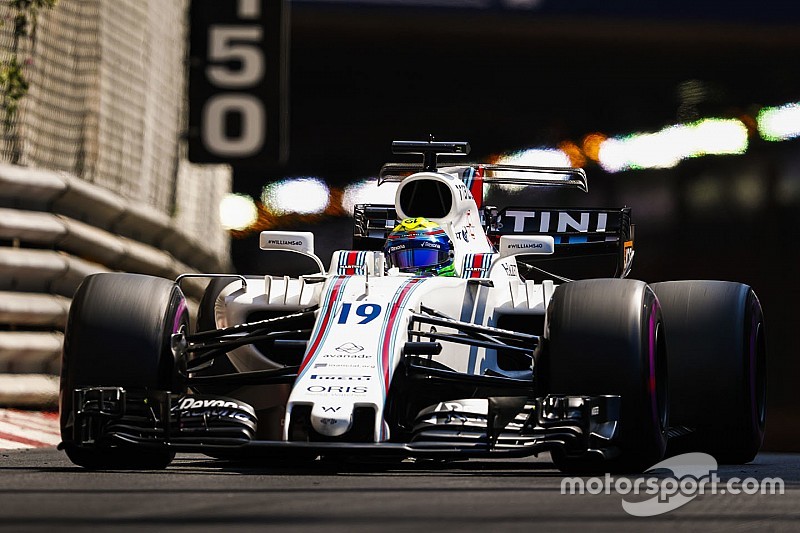 In his latest column for Motorsport.com, Williams driver Felipe Massa looks back at a difficult but not entirely fruitless Monaco Grand Prix weekend.

I had hoped for a different type of Monaco GP weekend. On the eve of the race, I didn’t hide from the fact that we had had higher hopes after our recent experiences in my second home event.

But unfortunately what happened was not what Williams Martini Racing had expected. At the end of the weekend, a ninth-place finished was a result that allowed us to score points in the championship standings, but I think realistically it was not possible to have got any more.

That the weekend would be an uphill struggle I understood already in the first free practice session on Thursday.

Qualifying was also more complex than expected, and on my first run in Q2 I made a mistake. I went back to the pits and fitted a set of new tyres, but then I was hurt by a yellow flag and I had to abort what was my last lap available in Q2.

Ultimately though I think it would only have been possible to start one or two positions in front of the seventh row where I ended up, but no more than that.

After qualifying, I had one goal in mind: just finish the race. I know the Monaco track well and I know that it is impossible to overtake if the car in front of you does not make a mistake.

But the story of this race is also that if you complete the 78 laps then you are normally rewarded with a good place, given the number of retirements that there normally are.

My race started with brake problems though on the first lap. Because of the issue, I could not use the brakes too heavily – because I had to prevent the temperatures from going up too high.

Luckily the nature of the track and the difficulties people have in overtaking meant that I could fight off anyone attacking me from behind, even when braking is not as good as it should be.

When the late safety car came out for Pascal Wehrlein’s crash, I was able to put on fresh tyres without losing positions – and it was a tactic copied by Sergio Perez. So we got on track in the same condition for the final laps, and our pace was very good.

I saw that Sergio was very aggressive in front of me, and when he made the mistake at Rascasse, knocking Daniil Kvyat out, I managed to go smoothly past both of them to take ninth place.

It was a lucky situation, but typical of Monte Carlo, and that's why I played a waiting game from the very beginning.

Now we are busy preparing for the Montreal track, where we head to with greater confidence after the difficult Monaco weekend. I think all of the tracks that are coming up will suit us better than Monaco did.

Looking back at the weekend, I also noted that Ferrari took its first Monaco GP pole position since I started from the front back in 2008.

Kimi did a good lap, and I'm glad he came back to taste the pole position. I think Ferrari’s car was the one to beat over the Monaco weekend. Looking at their onboard, and seeing how it was attached to the track, was just awesome.

Race after race, the Ferrari team is getting more and more in a head-to-head with Mercedes, and I think there are all the ingredients for this fight to last until the end of the season.

Story behind the photo: How homework caught Vettel victory