Experience is a priority for McLaren’s 2019 Formula 1 driver line-up because it would need a better car to “take a risk with two younger drivers”, according to CEO Zak Brown.

Fernando Alonso is yet to confirm whether he wants to stay in F1 beyond 2018 and McLaren is deciding whether to continue with Stoffel Vandoorne, who has struggled to realise the potential shown in his junior single-seater career.

McLaren has Formula 2 title contender and reserve driver Lando Norris waiting in the wings, but has been linked with multiple drivers including Kimi Raikkonen and Carlos Sainz in F1’s summer silly season.

Asked if McLaren was prioritising A-list drivers or those it fell were more realistic, Brown, speaking in Hungary prior to F1’s summer break, said he was looking at “all of the above”.

“It's difficult to get set in any one particular direction because so many pieces move,” he said.

“In situations like this you need to keep every door and every avenue open and wait for some dominoes to fall. Sometimes it's in your control, sometimes it's not.

“We know our situation with Stoffel. We’re seeing what other opportunities may or may not be available, seeing what ultimately Fernando wants to do.

“It's also about the package – experience and youth – especially in the situation we're in.

“Because we're rebuilding, to have two young drivers in our car wouldn't be a great place to be.

“If we had a better racecar then you might take a risk with two younger drivers because you've given them good racecars.” 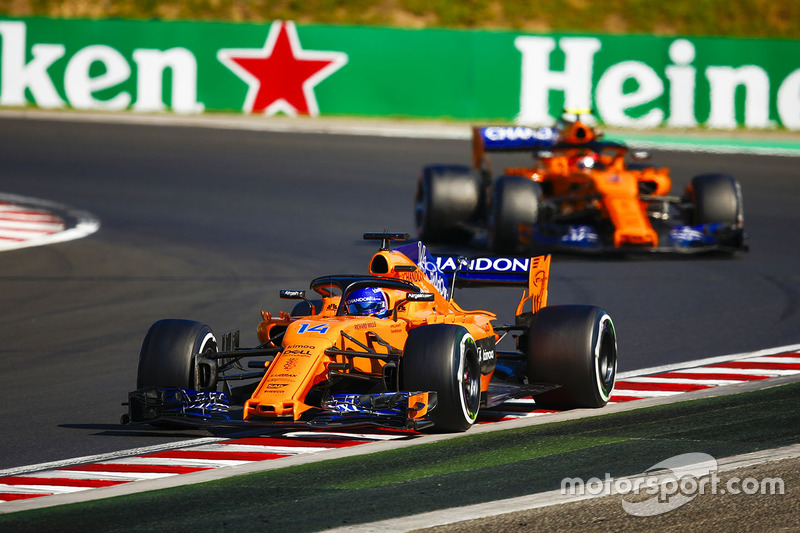 While Alonso’s future is in his hands, Vandoorne is actively fighting to keep his seat.

Brown said McLaren still backs Vandoorne and said it has given him “a ton of support”, pointing to the chassis change prior to the Hungarian GP weekend after an apparent downforce abnormality compared with Alonso’s car.

“The reality is we have two open seats, and it's our job to get the best driver situation possible and that requires talking to other drivers up and down pitlane,” said Brown.

“Every racing driver knows that they need to perform at the highest level because teams are always looking for the best solution at that moment.

“We're very much behind Stoffel. It's one of the main reasons why Gil joined us, to help with the driver situation.

“I feel very comfortable with giving him all the support we possibly can while we're in the Formula 1 silly season and of course having a look around at what the various opportunities are.”

Brown had indicated that Force India’s situation would be a key catalyst in the driver market.

Force India has now been saved by a consortium led by Lawrence Stroll, which will have a knock-on effect on the driver market because his son Lance is expected to move from Williams and deny either Esteban Ocon or Sergio Perez a race seat.